The German Film Academy in Berlin invited prominent politicians to talk about the films that inspire them. Chancellor Angela Merkel's favorite is a cult work exploring the harsh realities of life and love in the GDR. 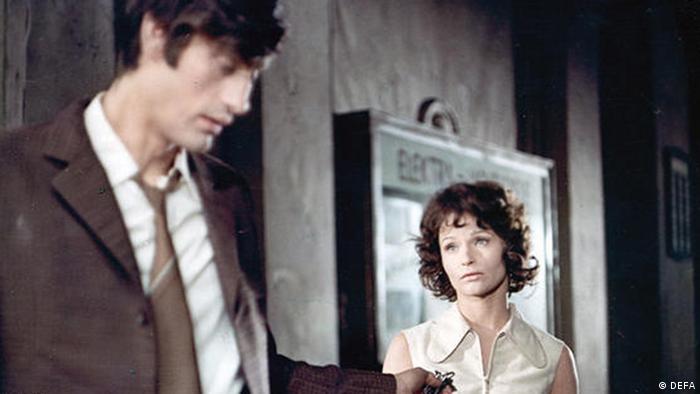 On the surface, "The Legend of Paul and Paula" is a simple love story. But the explosive power of the work was evident even before the premiere of the film from screenwriter Ulrich Plenzdorf and director Heiner Carow in Berlin's Kosmos Kino on March 29, 1973.

Two years earlier in the German Democratic Republic (GDR), Erich Honecker was named the first General Secretary of the Socialist Unity Party of Germany (SED). Many people hoped Honecker would advance the weak East German economy, but above all they hoped he would open the country to more freedom. 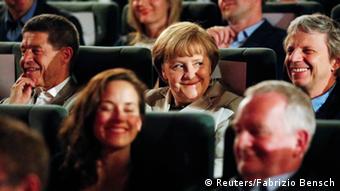 Honecker had seen and approved "The Legend of Paul and Paula" before it premiered, but the first screening of the film - produced by the state's own film production company - was a chaotic affair. Heiner Carow, who died in 1997, recounted what happened:

"The cinema seated 1,200 audience members. Of those, 800 were line-toeing representatives selected by the party. The other 400 tickets were sold freely," remembered Carow. "There was an icy silence at the end of the film. Then the Berlin representative for culture left the theater, slamming the doors behind him. He was barely out the door when 400 people began to clap wildly for about 20 minutes. The other 800 remained straight-faced and seated as if they had turned to stone."

"The Legend of Paul and Paula" remains a fascinating work because nearly every scene can be interpreted in a variety of ways. In the opening scenes, and again later in the story, old buildings are blown up. The film music is interrupted long enough for the viewer to pose the question of whether the new buildings will really be any better.

In these turbulent times in an anonymous quarter of East Berlin, Paula (played by Angelica Domröse) and Paul (played by Winfried Glatzeder) begin an affair. Paul is unhappily married, has a five-year-old son, and lives across the street from Paula. She is a single mother of two children. Paul and Paula meet at a disco and spend the night together in a garage where Paul is rebuilding an old car.

The iconic, flowery bedroom scene exhilarated audiences in the GDR

While Paula falls madly in love, Paul remains unsure. Though he enjoys the time he shares with Paula, he's not prepared to give up his marriage and his privileges. As a party functionary, he is expected to lead an "orderly life." "In my position, I can't afford to have a divorce. There are no official rules, but that's how it is."

Paul wants to protect his career. It is only when Paula's son is accidentally killed and she begins to distance herself from Paul that he realizes the true extent of his feelings for her. He fights to win her back.

It's a story that has not only inspired Angela Merkel, but also German film director Andreas Dresen. "I can't think of any other DEFA film [eds. the state-run East German film studio] depicting the Stasi."

Dresen was born in Gera, then part of East Germany, in 1963. The German Film Academy in Berlin invited him to talk about the film with Angela Merkel, who also grew up in the GDR.

Merkel was just 18 when the film was released. She had completed high school in summer 1973 and was studying physics in Leipzig. Music from the German rock band Puhdys is featured in "The Legend of Paul and Paula," but the chancellor explained that she had somewhat different musical tastes at the time.

"Back then I liked listening to music by the Beatles and the Stones or songs like 'Je t'aime' and 'Bridge over Troubled Water,'" she said. Merkel confessed that she was overwhelmed by the mix of real life and poetry in the film, even though she couldn't personally identify with the love story it portrayed.

The film captures the realities of daily life in the GDR. When Paula receives a delivery of coal, she carries it in buckets down to the cellar all by herself.

"First you had to complain to get the coal delivered, then you got it thrown in front of the door. Then you had to take it down to the cellar where there was water or rats running around. That wasn't very pleasant," Merkel recalled. 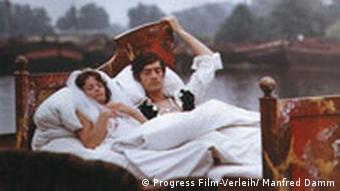 SED party members were opposed to every aspect of Paula's life philosophy. Far removed from the class consciousness of the working masses, she sought personal happiness by surrendering to love.

When she welcomes Paul back from the army in a white, almost see-though slip, she crowns his head with a wreath of flowers in bed. The hippie romance is almost perfect.

Andreas Dresen points to other anarchistic moments in the film: "And then Paul breaks down Paula's door with an axe. Love triumphs over petit-bourgeois ideals. It is colorful, full of flowers and rock music. Even drugs are hinted at."

Through her uncompromising desire to be happy, Paula became a cinematic icon. Three million people went to see "The Legend of Paul and Paula," making it one of the most successful DEFA films ever made in the GDR.

Angela Merkel said that she particularly liked the film's "drift into the surreal." For example, while lying in bed, Paul and Paula travel in a boat over the River Spree where generations of their relatives gather around them.

"On the one hand you are lost in the reverie and then once again come back very close to reality," the chancellor said. However, Merkel found the ending of the film particularly brutal: Paula dies during the birth of her first child with Paul. 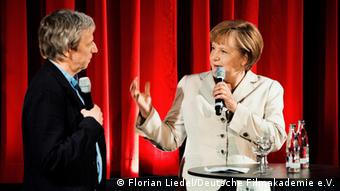 Angela Merkel talks with Andreas Dresen in Berlin about the film

But the reality of events after the release of "The Legend of Paul and Paula" was also brutal. Three years later, in 1976, songwriter Wolf Biermann was expelled from East Germany for a "violation of civic duty" after he criticized the government at a concert in Cologne. The hope that the GDR could change and become a more cosmopolitan state disappeared with Biermann.

Artists and intellectuals protested against his expulsion and produced an official petition. Angelica Domröse, who played Paula, signed the petition and found herself professionally sidelined as a result. In 1980, she settled in West Germany with her husband Hilmar Thate.

And Winfried Glatzender, who played Paul, lost his citizenship in 1982 after submitting multiple emigration applications. From then on, "The Legend of Paul and Paula" was no longer screened on television in the GDR.

Cinema searches for the meaning of life

Beyond blockbuster shootouts and sappy romances, there are now a conspicuous number of films that deal with God, the church, and the meaning of life. Is this symptomatic of our society, or part of an ongoing tradition? (30.03.2013)

Nazif Mujic starred in "An Episode in the Life of an Iron Picker," about the difficult lives of a Roma family. After winning a Silver Bear, he's returned to his village in Bosnia - and continues to face a harsh reality. (01.03.2013)

In the German capital, a showcase of documentary films at this year's Berlinale illustrates the medium's potential to reclaim the past and envision the future, says DW's Helen Whittle. (15.02.2013)