Nazif Mujic starred in "An Episode in the Life of an Iron Picker," about the difficult lives of a Roma family. After winning a Silver Bear, he's returned to his village in Bosnia - and continues to face a harsh reality. 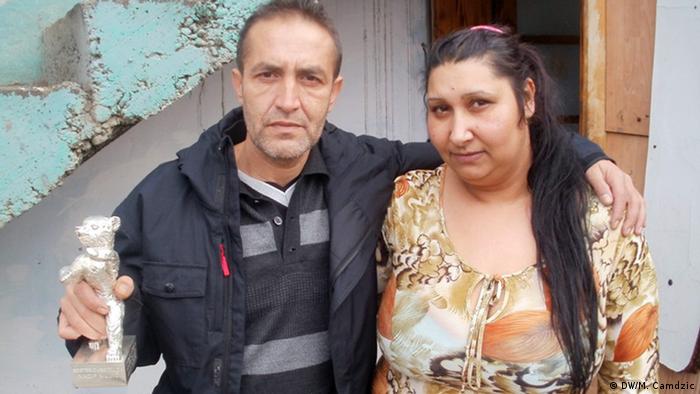 This particular Saturday - February 16, 2013 - was a special day in the life of Nazif Mujic. The Bosnian Roma, who had always been pushed to the back of the line in everything he did, was now sitting in the front row at the prestigious Berlinale Palace Theater at Potsdamer Platz in Berlin. The red carpet had been rolled out for him, he'd suited up and, together with his wife Senada, he stood before the international press - he was the winner of the Silver Bear for Best Actor at this year's Berlinale.

He received the award for his role in Danis Tanovic's film, "An Episode in the Life of an Iron Picker," for which Tanovic picked up the Grand Jury prize. Nazif plays himself in the film - a Roma who collects metal, selling his finds to the local scrap dealer to make a living, and look after his wife Senada and two young daughters. 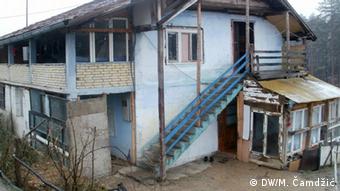 Still standing - the Mujic family home in the village of Poljice

Two weeks later, at his home in the small village of Poljice in Bosnia-Herzegovinia, postman Zikrija Mujagic is a daily visitor. He brings congratulatory telegrams and post from around the world: Nazif is now a movie star. His neighbors in the village bear witness to this. At the entrance to the town, they erected a chalkboard with a heart and a small message: "The best actor from Bosnia-Herzegovina lives here."

His phone rings constantly. Some people want to congratulate him, while many journalists seek interviews. Nazif is surprised by his success, and turns no one away. Almost no call lasts less than half an hour - he wants to meet everyone.

"I could never have imagined that something like this could happen," said Nazif Mujic. Then he tells his neighbors what it was like in Berlin. "After I won the prize, there was always a bodyguard with me. I couldn't even go to the toilet alone, or smoke a cigarette. Everywhere I went, someone was at my side."

The story begins in mid-2011. Nazif's wife, Senada, is pregnant and suffers a miscarriage, she is bleeding internally, and is turned away from a hospital after driving hours to get there - she has no medical insurance and no money, which means no treatment. 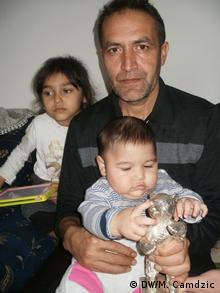 The routine medical procedure costs the equivalent of 490 euros ($638) - a lot of money for Nazif. Nazif desperately mobilizes family and friends to help save his wife's life. In the end he manages to get her to a doctor - with borrowed health insurance cards.

When Oscar-winning director Danis Tanovic ("No Man's Land," 2001) heard the story, he got together 17,000 euros and took his small team, along with a digital camera, to Nazif and his wife.

"Danis heard our story, came and we quickly agreed. Everything went so fast," explained Nazif. "We never imagined that the film would be a success," he added. Even his wife, Senada Alimanovic, can hardly believe it: "I never thought I would be in a film. We were able to do it because we played ourselves," she said, adding, "no one should have to experience what I've been through."

Allowed to keep the suit

Senada and Nazif re-enacted their lives, and the terrible events, exactly as they were - day for day. There was no script, they played themselves. It was shot in the village where they live; the doctors in the movie are "real" - even though they were not their regular physicians at the time. The result is a film that is neither fiction, nor a documentary - and yet both at once.

Nazif and his wife are now back in their village, in their dilapidated house. The Silver Bear sits on a shelf in a room, sometimes the children play with it. And the suit Nazif was allowed to keep has been stored away.

"Today he'll put his jeans on, take an axe, and go in search of metal. Maybe he'll find something - we live from that," said Senada, and Nazif agreed. "In my 42 years, I've always worked. I've always been active. I represent the Roma in our village. I'm not afraid of work, I hope I find something." 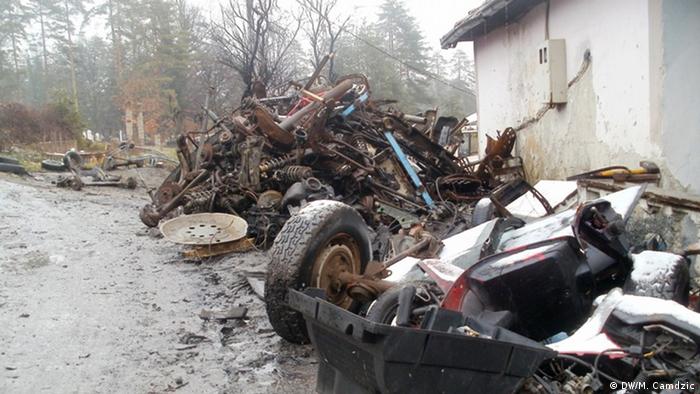 Car wrecks can be found scattered across the town

Many Roma in Poljice live from collecting scrap metal. Wrecked cars, old machinery and metal drums can be seen scattered throughout the town. The villagers are proud of "our Nazif," as they call him. They are enjoying that some of Nazif's glory is rubbing off onto them too, but they know it's only temporary. In a few days, said Nazif's brothers Suljo and Kasim, we will all be forgotten.

When a visitor arrives in the village, especially if he or she is a journalist, the villagers gather to share their problems: their houses are leaking all over because of the rain, no one cares about the village, the infrastructure is crumbing, there is no sewage system and the roads remain unpaved. Things are in sort supply, while there's also a lack of food and medicine, and no one has health insurance.

In front of Nazif Mujic's house, firewood was being unloaded by Esed Hodzic, a family friend. "I saw him on television when he was in Berlin receiving his prize. And I knew when he came back to Poljice from the red carpet, he wouldn't have any wood for his oven," Hodzic said.

Nazif says goodbye to the visitors who have come to the small village in northeastern Bosnia to meet him. He then sets out in search of car wrecks that must be dismantled, with just his bare hands, an axe and a hammer. Exactly like in the opening scene of the film, "An Episode in the Life of an Iron Picker."

Film award recognizes the struggle for art and human rights

For ten years DW Akademie has been inviting African, Asian and Latin American film festival managers to Berlin for a workshop that focuses on festival organization, financing and networking. (14.02.2013)

Berlinale 2013: Glamour and Globalization at the International Film Festival