The German chancellor dismissed influential Bavarian leader Horst Seehofer's suggestion of a cap on refugees for 2016, as tensions mount between Merkel's Christian Democrats and their sister party in the south. 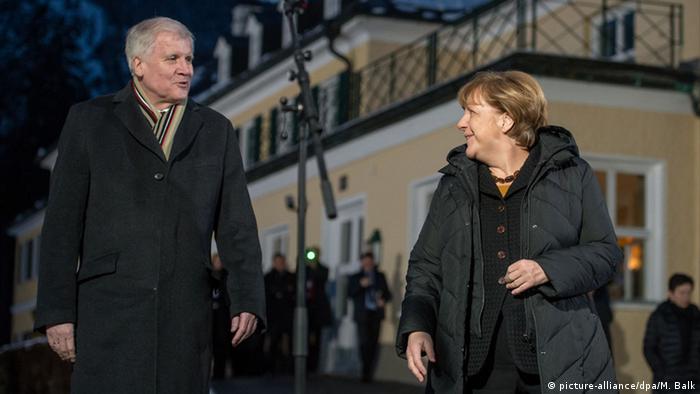 Angela Merkel attended a meeting on Wednesday with representatives of the Christian Social Union (CSU), sister party of her Christian Democratic Union (CDU), after a tense previous appearance in November alongside state premier Horst Seehofer.

Meeting with CSU representatives in the Bavarian town of Wildbad Kreuth, Merkel again rejected proposals for capping the number of refugees allowed into Germany in 2016.

"There exist some varying positions. That will probably not change in the discussion today," Merkel said, referring to CSU chief Horst Seehofer's desire to implement a natiowide ceiling of 200,000 refugees this year.

Seehofer himself said people shouldn't expect him and the chancellor to reach an agreement on the issue, telling reporters to forget the idea that "we're going to have a completely new refugee policy" by tonight. "I stand by my claim that we need a change in refugee policy this year," he said.

Other CSU officials, such as the party's Bundestag chairwoman Gerda Hasselfeldt, echoed Seehofer's comments. "That is a benchmark that makes it clear: We need a stronger limit," Hasselfeldt said, referring to the proposed cap.

When Merkel last shared a stage with Seehofer, the state premier left the chancellor stranded at his side on stage as he berated her policies for almost a quarter of an hour. The images adorned German front pages for several days.

However, the chancellor was also quick to underscore the solidarity between the two parties. "I also want to emphasize: CDU and CSU have far more positions in common," Merkel said.

Merkel's refugee policy has come under fire, primarily from within her own party, the CSU, and other organizations or groups further to the right. News that numerous women were sexually harrassed on New Year's Eve in Cologne, and to a lesser extent in Hamburg, by men who appeared to be Arab have also sparked renewed criticism of her policies.

On Thursday, British Prime Minister David Cameron is expected to join the conference - as he seeks renegotiated terms of EU membership ahead of a referendum in 2017. Merkel said she wanted to produce a "reasonable package" of reforms that would keep Britain in the bloc, after several German politicians have proffered support for Cameron's most contentious proposal: a restriction on welfare eligibitly for EU migrants to a different member state.

"Throughout these next weeks, it is especially important that we make decisions in our own interest in order to achieve a reasonable package that will allow Great Britain to remain a part of the European Union," Merkel said. "But ultimately, this is of course the decision of British citizens."

After months of pot-shots at the chancellor, Christian Social Union leader Horst Seehofer has pledged support for Angela Merkel, but he still wants a refugee cap. Kate Brady reports from the CDU conference in Karlsruhe. (15.12.2015)

German Chancellor Angela Merkel defended her stance on refugees on the opening day of her CDU party conference. The party appears set on reducing the influx, without putting a cap on the number of migrants. (14.12.2015)