German Chancellor Angela has cautioned her Bavarian allies against hinting at a possible Greek exit from the eurozone. She warned that "everyday counts" in efforts for Greece to comply with its bailout commitments. 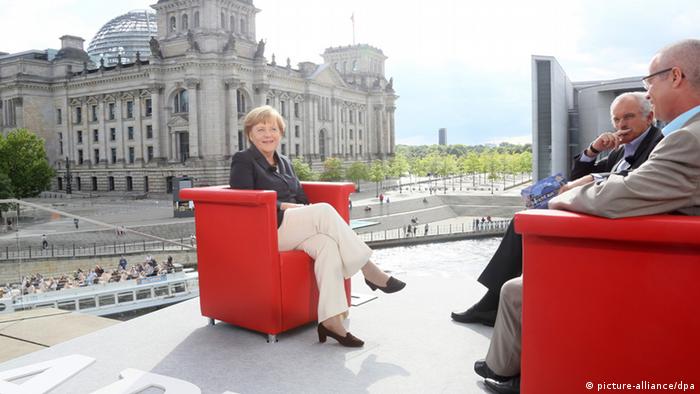 In an interview with German public broadcaster ARD on Sunday, the German chancellor urged politicians within her center-right three-party coalition to remain cautious when discussing Greece's future in the eurozone.

"My plea is that everyone weigh their words very carefully," Merkel said, adding that Europe is currently in a very "decisive phase" of its enduring financial crisis.

The Bavaria-based Christian Social Union (CSU), which for decades has been allied with Merkel's Christian Democrat (CDU) party, has stepped up criticism of Greece in recent days, fuelling speculation of an early Greek exit. CSU General Secretary Alexander Dobrindt told this weekend's edition of newspaper Bild am Sonntag that he believed Athens could be out of the bloc by 2013.

Possible 'Grexit' a calamity or coup for the eurozone?

At the next EU summit in October, politicians will face the possiblity of Greece exiting the eurozone. Grand ideas of European solidarity are less likely to be at issue than the question how smooth an exit could be. (25.08.2012)

The chancellor sought to counter mounting criticism when she met Greek Prime Minister Antonis Samaras in Berlin on Friday, stressing she "wants Greece to remain a part of the eurozone."

Greece has a 'lot to do'

Samaras was engaged in a charm offensive when he visited Merkel and French President Francois Hollande on Friday and Saturday in a bid to encourage Europe to ease the terms of its 130-billion-euro ($161 billion) bailout deal.

Greece is currently required to cut 11.5 billion euros ($14.3 billion) from its budget, with the goal of reducing its deficit to three percent of gross domestic product (GDP) by 2014.

Both Merkel and Hollande have specified that the eurozone should wait for the so-called Troika to issue its report on Greece's progress toward fiscal reform before making any major decisions. The European Union (EU), European Central Bank (ECB) and International Monetary Fund (IMF) are expected to publish that report in September.

When asked in the ARD interview on Sunday how confident she was that Greece would meet its targets, Merkel said: "In this context, every day counts now to really strengthen efforts and implement what has been promised."

Merkel also expressed her support for comments made by Bundesbank chief Jens Weidmann in a Spiegel interview released on Sunday. Weidmann warned against the ECB's plan to buy up government bonds from debt-stricken eurozone members to tackle the crisis. He told the magazine that the plan would "give rise to long-term avarice."

"We should not underestimate the danger that central bank financing can create addiction, like a drug," he said. "In democracies, it is parliaments and not central banks that should decide upon such a comprehensive pooling of risks."

Merkel said she was confident the ECB was acting within its mandate for price stability, but welcomed Weidmann's warning to European politicians. "I support Jens Weidmann and believe it is a good thing that he, as the head of the German Bundesbank, has much influence in the ECB," she said.

ECB President Mario Draghi is expected to lay out the bond-purchase scheme after a meeting of the bank's 23-member Governing Council on September 6.