German Chancellor Angela Merkel has presented a new law aimed at integrating refugees. The bill regulates the support that newcomers receive, but critics say it makes demands on them that will prove counterproductive. 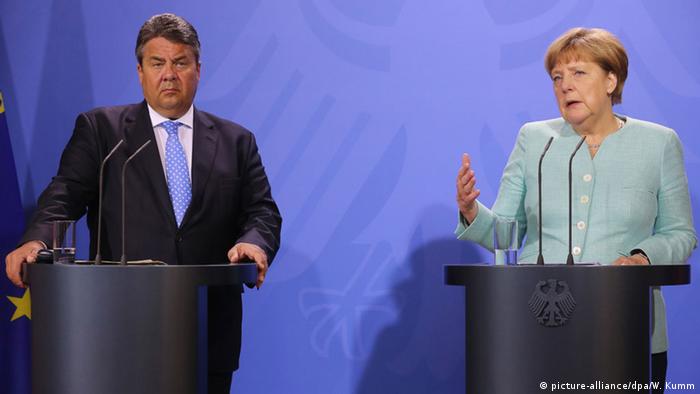 Angela Merkel presented the new law at a press conference on Wednesday morning in the eastern town of Meseberg, where her coalition government had gathered for a summit. "I think it is a milestone that the government has agreed an integration law," she told reporters.

Flanked by Vice Chancellor Sigmar Gabriel, Merkel underlined both the supportive and the punitive elements of the bill, promising that Germany would be a country that made migrants "a good offer," but at the same time "we also expect the people to take up that offer so that integration can work."

Gabriel, head of the Social Democratic side of Merkel's coalition, was also at pains to underline the tough line the law took, calling it a "real paradigm shift" in the history of immigration in Germany.

"In a few years this law will be seen as a first step towards an immigration law," he said. The law, he said, sent the message to immigrants: "if you make an effort something will become of you."

Interior Minister Thomas de Maiziere echoed the line in a separate press conference in Berlin in the afternoon, describing the bill as "a really good compromise."

It's a milestone, says Merkel

On Tuesday, Merkel's cabinet had retreated to Meseberg's baroque castle, which serves as the government's official state guest house, to iron out final details, which include stipulations requiring refugees to attend integration courses or face benefit cuts.

Few have doubted that Germany required new legislation to deal with the influx: According to the government's official figures, a total of 476,649 applied for asylum in the country in 2015, most unable to speak German, and all requiring some kind of social assistance to be helped onto the job market - though of course not all of the asylum applications will be successful.

Jobs: The government intends to create some 100,000 "one-euro jobs" - work schemes that were designed for the long-term unemployed, typically paid by a government subsidy of between 1 euro and 2.50 euros an hour ($1.10 - $2.80) as compensation - on top of existing benefits. Newcomers can have their benefits reduced to the bare minimum (and only in tokens, not cash) if they refuse to work.

A previous regulation that refugees cannot accept job offers if there are no German or EU citizens available to do the job is to be suspended for three years - though only in areas with a below-average unemployment rate.

Education and training: Under the new law, refugees will be allowed to apply for training courses at a much earlier stage - after three months, whether or not their asylum applications have been processed. If they have been in Germany for 15 months, they can also apply for money for job training programs. However, asylum applicants from a so-called "safe" country of origin - a category the German government is constantly expanding - are not entitled to training.

Refugees who have found a place on a job training program will automatically be given legal resident status for the duration of the program. If the program results in a job, the status is extended for two years. If not, it is extended for six months to allow time to look for work. 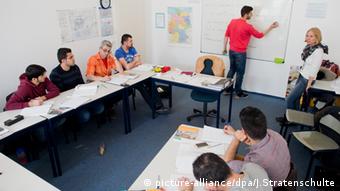 Refugees will have to attend integration courses, or face benefit cuts

Permanent residency: This deadline for refugees being given permanent residency status has been extended from three to five years - and only on the condition they have learned adequate German and secured their own living.

Obligatory residence: From now on, and for the next three years, regional governments will be allowed to determine where refugees may settle - either by banning them from certain areas or by allocating them to certain areas. Refugees who have found work or a place on a training program are exempt from the rule.

The law was condemned even before this week's meeting began, with an alliance of refugee aid organizations and charities writing an open letter to Interior Minister Thomas de Maiziere describing the package proposals as counterproductive.

Though the bill contained "a series of proposals that could facilitate the integration of refugees, overall it is not suited to guaranteeing the early integration of those seeking protection in Germany," the charities said in the letter, which was co-signed by over a hundred academics, writers and artists.

Pro Asyl, the most politically vocal of the refugee aid organizations, isolated four major points in the new law that they believe will hinder integration, and could violate the refugees' constitutional rights.

Forcing refugees to settle in certain areas and cutting their social benefits threatened their right to free movement and an "existential minimum," Pro Asyl said in a statement released on Monday.

Meanwhile, according to Pro Asyl, tightening the conditions for residency would lead to "great insecurity among the refugees," and the obligation to do government-allocated "one-euro jobs" would make it harder, rather than easier, to enter the job market.

Lawmakers have agreed on a draft law to assimilate asylum seekers into the country's culture and economy. While the state will provide aid, migrants are expected to show eagerness to become a part of Germany. (24.05.2016)

A meeting between SPD party leader Sigmar Gabriel and old socialist archenemy Oskar Lafontaine has raised eyebrows. But, analysts say, don't expect the Social Democrats to make a leap to the left a la Sanders or Corbyn. (13.05.2016)