Chancellor Angela Merkel has told victims of major flooding to expect aid money as early as August. Merkel was visiting Fischbeck in eastern Germany, where a key dam on the River Elbe broke during the floods. 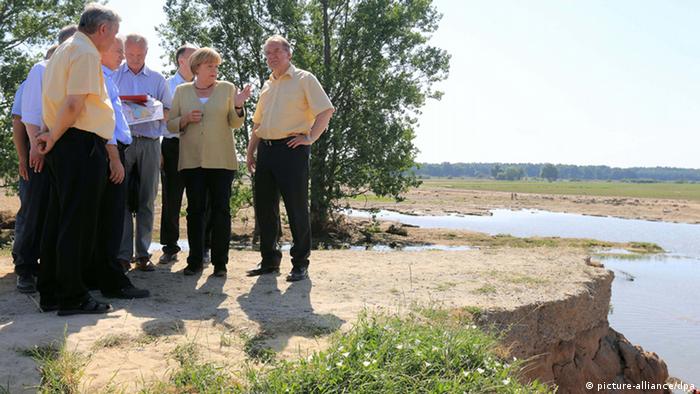 Angela Merkel said on her trip to Fischbeck on Tuesday that the first financial aid from an 8-billion-euro ($10.5 billion) flood relief fund would be made available in August, amid the federal election campaign.

"The people affected can work with that assumption," Merkel said, promising what would be the quickest aid response in Germany's history. The federal and state governments are pooling together to finance the fund.

After the floods: Relief work and cleanup

The water is finally receding, but in Germany's flood zones people are still working around the clock to repair the damage. Federal and regional governments have pledged billions of euros in urgently needed assistance. (21.06.2013)

Provisional figures suggest the affected regions sustained at least 6.7 million euros in damage during June's flooding. Saxony-Anhalt, which Merkel was visiting, has registered roughly 2.7 billion euros - the most of any German state. Neighboring Saxony is second on the list, with Bavaria - the first region to face major flooding, especially in Passau - next in line.

The chancellor also visited the high-speed ICE railway line linking Hanover and Berlin, which was damaged when Fischbeck's dam broke and could remain out of service for months. The rail route faces diversions and delays in the meantime.

Like Passau in Bavaria, Fischbeck became one of the symbolic centers of June's flood. Images of both its broken dam and bold efforts to plug it involving sinking two old barges at the site of the breach made the front pages of many national newspapers.

Germany goes to the polls on September 22, with Merkel's Christian Democrats seemingly on course to win more votes than any other party. The question of whom they could ally with to form a coalition government, however, is more difficult to answer.