After the floods: relief work and cleanup | Germany| News and in-depth reporting from Berlin and beyond | DW | 21.06.2013

After the floods: relief work and cleanup

The water is finally receding, but in Germany's flood zones people are still working around the clock to repair the damage. Federal and regional governments have pledged billions of euros in urgently-needed assistance. 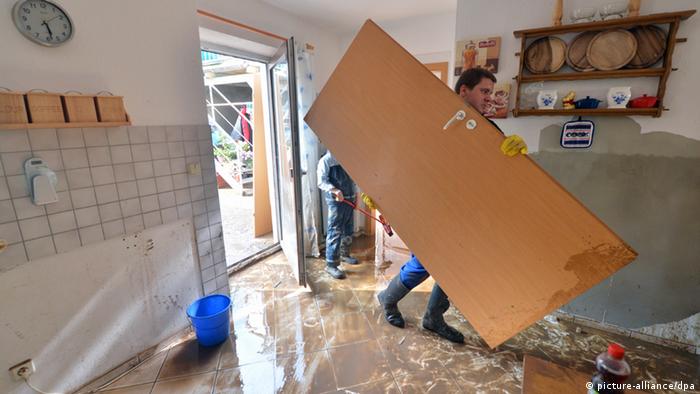 "We're the clean-up champions of Germany!" The mayor of Grimma, Matthias Berger, grins broadly as he points to his town's marketplace. "Clean as a whistle, just five days after the flood!"

Volunteers collected and took away 35,000 cubic meters of rubbish to make the town center presentable again. It's looking good now, but Berger admits that morale did flag at times. "When you see all the things that have been destroyed, it does make you want to weep," he says. 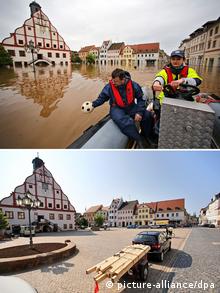 The little town in Saxony can at least comfort itself that one measure taken since the last catastrophic flood in 2002 had some effect. Back then, a bridge across the Mulde River collapsed under the force of the swollen river. It was rebuilt slightly higher than before, allowing more water to flow beneath its arches. Berger says the floodwaters in the town would otherwise have been 70 centimeters (about 30 inches) higher.

Nonetheless, he says, the second major flood in just over a decade has had a disastrous impact on the town. Businesses have been hit particularly badly. "Two catastrophes like this in such a short space of time - no insurance company is prepared to take that on any more, and banks won't lend any money," Berger explains. He can only hope that Grimma will benefit substantially from the compensation fund, as it did in 2002.

Initial estimates suggest that the floods along the Elbe and Danube rivers and their tributaries have caused at least 12 billion euros ($15.8 billion) worth of damage. The Bavarian town of Passau alone is looking at 200 million euros, while most of the other flooded areas can't even begin to put a figure on the damage yet.

Federal and regional governments have said that together they will put 8 billion euros towards the repairs. On Wednesday (19.06.2013) they agreed to set aside this sum to assist particularly badly-affected areas. Financing will come partly from taking on new debt, and partly from the German Unity Fund. The state has agreed to bear the cost of repairing motorways and major roads, and the remainder will be shared between the federal government and the various German states.

The district of Stendal is also hoping for a lot of support. This is where the Elbe broke through a dike near the village of Fischbeck. The countryside for miles around vanished beneath the waters. A dramatic attempt was made to plug the gap in the dike by sinking three barges in front of it.

"Then we carried on filling in the breach with sandbags to reduce the amount of water escaping through it," Carsten Wulfänger, a local authority official, told DW. "That meant we were able to use the roads again, which is one of four requirements for getting people back into their homes: They need roads, water, sewers, and electricity." Wulfänger said that as yet it was impossible for him to estimate the amount of damage in his area.

One man's curse is another man's blessing 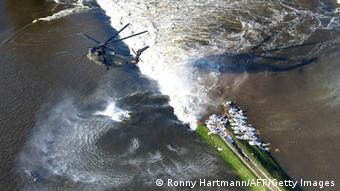 For people further downstream in the town of Wittenberge, the bursting of the dam in Fischbeck meant that they didn't suffer as badly as they feared. The water level in the river is still 6.3 meters - 20 centimeters higher than the point at which river traffic is allowed on the Elbe. Many sports fields and boathouses have fallen victim to the mass of water, and many companies have had to shut down production, according to the local mayor, Oliver Hermann: but overall, he says, his town got off lightly.

"The state of Brandenburg did a good job of upgrading the dikes, cooperation with the disaster prevention services was good, and thanks to the good weather we had lots of volunteers helping out," says Hermann. An initiative on the part of young local people particularly impressed him: they made arrangements online to meet up to fill sandbags, under the slogan "It's cool to help."

The people of Wittenberge know that things can be very different. The mayor recalls the winter floods of 2011, saying that it was harder to mobilize people back then. "There was more of a sense among the local population that the disaster relief forces would deal with it," he says, adding that he felt that this was partly the fault of local authorities. "That's what we'd told them in recent years, so we are partly to blame, because we did go about it in a very routine sort of way." 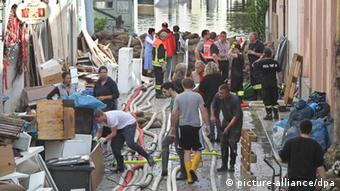 Many people pitched in to help clean up in Passau

And this is exactly where Germany still needs to make a lot of changes, says Gabriele Hufschmidt, a geographer at the University of Bonn. The general population has to become aware of the potential risks, she says: it can't be the case that many people who live in flood zones are taken by surprise when disaster really does strike. Hufschmidt believes that everyone needs to be educated about disaster prevention.

"People need to be educated in a much more active and intensive manner, and need to be aware," she said. "Information about this danger is actually a right, one that they must demand from their politicians."

For this reason, the master's program on disaster preparedness and management at the University of Bonn covers important topics like flood control, disaster response, insurance issues and structural measures against floods. For Hufschmidt, it's important that the participants - all experienced firefighters or members of the Technisches Hilfswerk, a civil protection organization, or other agencies - recognize the importance of linking these individual areas of expertise.

Geographical location: a blessing and a curse

In the town of Hitzacker, in the state of Lower Saxony, the Elbe floodwaters were kept out of the historic core thanks to levees. But that wasn't the only reason the town avoided the worst of the disaster, said Mathias Heinrich, director of the health and safety office of the municipality of Elbtalaue. "We were lucky. And we made good use of our advance warning of 10 days, during which time we observed the water level and built up the levees where we feared the worst. " 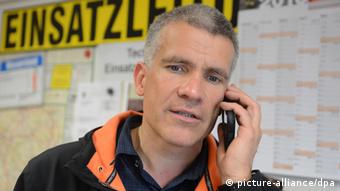 Berger, mayor of Grimma, says his town has learned something from the disaster

In Grimma and Passau the situation was completely different. Both cities are located on fast-flowing rivers - the Inn and the Danube in Passau and the two tributaries of the Mulde in Grimma - giving inhabitants only a few hours warning after a heavy rainfall.

"Building a levee here would have been useless," said Mayor Berger. And despite all the exhaustion after fighting the floodwaters for weeks, he still manages a flash of gallows humor - and perhaps sparks a new business idea. "If there is a flood somewhere, let us know. We would love to come by and bring along the government and a few citizens, for now we're really crisis-tested," he says.

Floods in Saxony have begun to subside, but only to show the extent of the damage done by the swollen rivers. Costs are estimated to be in the billions of euros and many people have lost their livelihoods. (12.06.2013)

Cleaning up after the floods