German Chancellor Angela Merkel has said it may be necessary to rethink the EU's energy partnership with Russia in the long term. She said there was also no scope to relax current economic sanctions against Moscow. 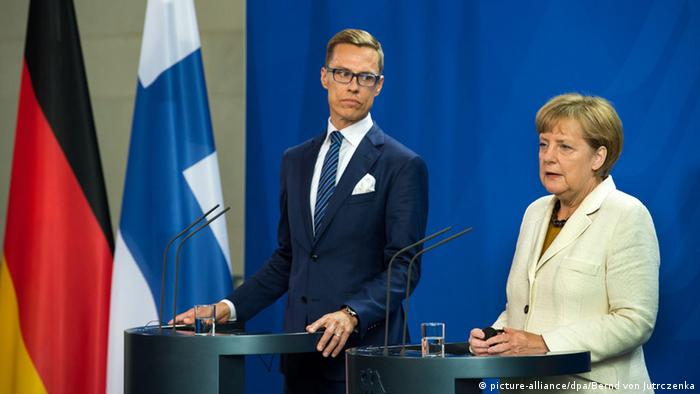 Germany and the EU might need to reevaluate their energy policies with Russia, if Moscow continued to violate basic principles in eastern Ukraine, chancellor Angela Merkel said on Monday. However, she added that there were good reasons to continue the deal, and any future review should not completely cut it off.

Following talks with Finnish prime minister Alexander Stubb in Berlin, Merkel said there were no opportunities to scale back economic sanctions against Moscow.

"Unfortunately, we are a very long way away from that," Merkel said, adding that the situation in eastern Ukraine was "anything but satisfactory."

"The elementary question of the cease-fire is not yet cleared up, still less the future status and cooperation between the Luhansk and Donetsk regions and the Ukrainian central government," Merkel said.

"There is no protection of the border along the entire Luhansk and Donetsk region - no control, no buffer zones, and all of that is the minimum condition for us to be able to consider revoking sanctions.

She said a complete ceasefire was necessary in the region, and for the Organization for Security and Cooperation in Europe (OSCE) to monitor free elections in Ukraine in agreement with the government in Kyiv.

Both Kyiv and several Western countries have repeatedly blamed Moscow for supporting the insurgency in eastern Ukraine with weapons and personnel, but Russia has adamantly denied involvement.

Stubb, whose country shares a long land border with Russia, said Helsinki would not apply for membership in NATO.

"This is an issue you deal with in good weather. When the weather's bad, you don't," Stubb said.

Almost 3,000 people have died so far in Ukraine's conflict, with violence continuing despite a ceasefire agreed on September 5.