German Chancellor Angela Merkel admitted that she had failed to convince other leaders at the G-8 summit to adopt a global bank tax. But she dismissed talk of a rift with the US over European austerity measures. 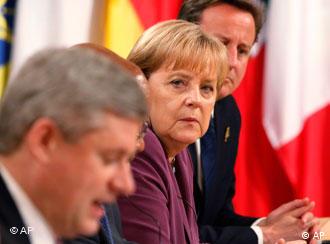 Merkel has failed to get non-Europeans on board

Before heading to Canada to meet with leaders of the world's top economies, German Chancellor Angela Merkel had hoped to get an agreement on a worldwide tax on bank risk-taking and a tax on financial transactions, but she has conceded that neither G-8 nor G-20 countries were likely to endorse the plan.

"I think that we Europeans have a more positive approach (to the tax issue) ... but other countries will not join in," Merkel said on Friday after the first day of talks at the G-8. 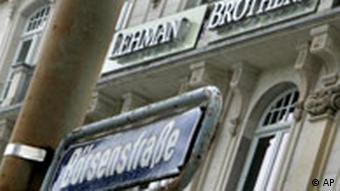 Leaders of the European Union agreed on June 17 to call on the G-20 group of advanced and emerging economies to enact both measures to discourage risk-taking by banks and force banks to pay for bank failures. Sweden has already imposed a levy on its banks and Britain, France and Germany have all agreed to do the same.

But summit host Canada came out against the plans, partly because Canadian banks have emerged relatively unscathed from the economic crisis. Other participants see the taxes as a poorly timed intervention as banks and economies focus on recovering from the economic meltdown.

"In most states, the problem is that the banking sector has not reached pre-crisis levels of lending to the real economy. The introduction of such taxes and levies would hardly be a factor to stimulate such lending," said Andrei Bokarev, an economic advisor to Russian President Dmitry Medvedev.

Despite conceding defeat on the bank taxes, Merkel played down concerns about a greater rift in economic policy between Europe and the United States.

A disagreement appeared to be developing between Washington and Berlin in the run-up to the event in Huntsville, near Toronto. US officials had voiced concerns that too much zeal in making cuts to tackle the budget deficits of European nations could hamper growth in the future. 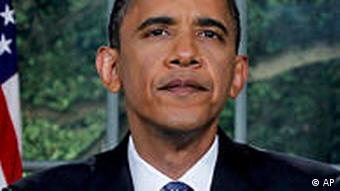 US President Obama is against harsh spending cuts

Speaking after early discussions, Merkel said she believed it was possible for countries to gain a tighter grip on public spending without derailing growth.

"I have made it clear that we need sustainable growth and that growth and intelligent austerity measures don't have to be contradictions," Merkel told journalists. "The discussion was not controversial, there was a lot of mutual understanding," she said.

US President Barack Obama earlier insisted that national economic policies must focus on bolstering the recovery, rather than immediately tackling deficits.

"This weekend in Toronto I hope we can build on this progress by coordinating our efforts to promote economic growth, to pursue financial reform, and to strengthen the global economy," Obama said at the White House on Friday.

Merkel had said that G-8 members should start to cut their deficits immediately, despite fears that this could kill the global recovery. 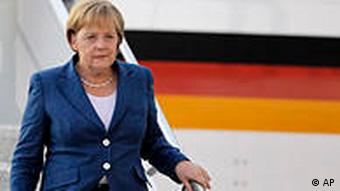 "It is time to reduce the deficits. Europe has experienced what it means to have too big deficits," she told journalists on arrival at the summit.

Merkel, as head of Europe's largest economy, has led moves to slash spending in the wake of the eurozone debt crisis. Critics have said that the more than 80 billion euros ($98 billion) in savings announced by Merkel over the next four years will hit growth.

"We need growth that doesn't rely on debt," Merkel insisted. "The world needs a new architecture for financial markets and the EU and I will push for that very intensively."

Berlin has support in Europe

Other EU countries, like Britain, are following the German approach. British Prime Minister David Cameron arrived at his first major international summit days after laying out a budget aimed at tackling Britain's own record deficit. Cameron argued that a failure to reduce the deficit would pose an even bigger threat to the recovery.

"There must be the flexibility for countries to act, taking account of their own national circumstances. But I believe we must each start by setting out plans for getting our national finances under control," Cameron wrote in an article for Canada's Globe and Mail newspaper.

However some, including France and the US, object to Britain and Germany's cuts. According to critics, measures such as pay freezes will thwart demand for products from other struggling European economies. 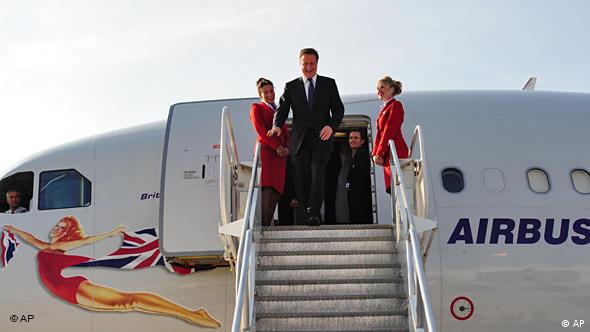 Hosts Canada back the US

But he also warned of lurking danger. "The fiscal stimulus we have implemented was necessary to protect our economies from a much worse crisis," he wrote.

Merkel arrived in Canada on Friday, and flew to Huntsville, the resort where the summit opened at midday local time. The topics up for discussion aside from economic policy include the Middle East and the conflict surrounding Iran's nuclear program as well as Afghanistan.

The economic debate is likely to come to a head on Saturday and Sunday, when an additional 11 countries will join the talks, plus the European Union, as the G-8 turns into the G-20 summit. Together, the G-20 nations make up two-thirds of the world population and represent about 85 percent of global economic power.

The leaders of the world's industrialized and emerging countries are converging on the Canadian city of Toronto for crucial talks on overcoming the global financial crisis and boosting economic growth. (24.06.2010)

G-8 and G-20 leaders on course to disagree

Leaders attending the G-8 and G-20 meetings in Canada will debate – and inevitably disagree – on several issues impacting the global economy. Germany's austerity program and its ban on naked short selling are among them. (25.06.2010)

The G8 and G20 will meet in Canada over the coming weekend in back-to-back summits aimed at addressing a host of major crises threatening global security, society and the world economy. (24.06.2010)