Most Europeans remember where they were the day the Berlin Wall fell. It seems, however, that French President Nicolas Sarkozy has become a little forgetful. Critics accuse him of trying to rewrite history. 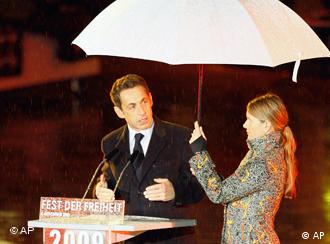 20 years on, Sarkozy really was in Berlin on November 9

Nicolas Sarkozy posted an emotional entry on the social networking website Facebook late on Sunday entitled: "Memories of the fall of the Berlin Wall, November 9, 1989." However, it seems that the French president's recollections of that historic day are somewhat hazy.

French journalists have been questioning Sarkozy's gripping tale of a journey to Berlin on the morning of November 9th, culminating in him hacking into the Berlin Wall with his pickaxe later the same evening.

It was, seemingly, a busy day for the French president, then 34 years old and deputy leader of the conservative RPR party. Early that morning, having "received interesting news from Berlin, apparently heralding a change in the divided German capital", he set off towards Berlin together with political ally Alain Juppe.

"On arriving in West Berlin, we headed towards the Brandenburg Gate, where an enthusiastic throng of people had already gathered, after the announcement of the probable opening of the Berlin Wall," Sarkozy wrote.

"Then we nipped off to Checkpoint Charlie to travel to the eastern side of the city and confront the Berlin Wall, on which we were able to land a few blows with a pickaxe."

Picking holes in the story

While the decline of the German Democratic Republic was clear to see, the fall of the Berlin Wall was triggered by a surprise announcement in the evening of November 9th, 1989, which makes it difficult to believe that Sarkozy got wind of the imminent event in the morning of that same day.

Also, on November 9th, Sarkozy's alleged companion, Alain Juppe, was in fact in France attending a memorial service for former French leader Charles de Gaulle. Juppe says he remembers neither the ceremony, nor the date of his trip to Berlin, but archive material from conservative newspapers like Le Figaro confirms Juppe's whereabouts. 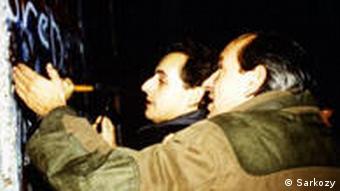 Graffiti on the Wall suggests this is West Berlin

Historians were also baffled by Sarkozy's description of attacking the Wall with his pickaxe on November 9th, as nobody thought to attack the structure until the following day.To imply that he attacked the eastern side of the Wall is also confusing, as in the accompanying photo Sarkozy is seen in front of a section clearly covered with graffiti. This is a distinctly Western characteristic, as the armed guards in the GDR prevented people from even touching the eastern side of the Berlin Wall, let alone painting on it.

Alain Juppe, who initially wrote a blog post corroborating Sarkozy's story later changed its content, adding the proviso that he could no longer remember precisely which day he had been in Berlin. Reports from the Agence France Presse news agency, dated November 17, stated that Juppe had just returned from "a flying visit to Berlin, during which he was accompanied by Nicolas Sarkozy".

Prime Minister Francois Fillon - whom Sarkozy claims to have met by chance at the Brandenburg Gate on his visit - also supported his president's version, and added that he saw another French politician, Alain Madelin, on the same day. Madelin, however, immediately denied that he was in Berlin on November 9.

"Maybe I was there on November 10, maybe later ... No one could have foreseen what was going to happen and reacted so quickly," Madelin told the Rue89 investigative website.

Among the more than a thousand comments by Facebook users on the controversial post, is this question to Sarkozy, "What makes you think you can rewrite history?"

Sarkozy 'had a go with a pick-axe' on Berlin Wall

French President Nicolas Sarkozy went to Berlin on November 9, 1989, and was part of the crowd that took to the Berlin Wall with pick-axes. He shared his memory of that historic night with a post on his Facebook page. (09.11.2009)

When the wall came down

After East Germany announced the easing of border controls, thousands stormed the Berlin Wall and demanded its opening. Deutsche Welle looks back at the events connected with this turning point in European history. (10.11.2009)

He has failed to halve class sizes in problem schools or build the 700 000 new houses he promised. But in many areas his government has been working hard. (06.11.2009)

Listen to a report on evidence against Sarkozy's claims