Meet the Germans live: Summer and vacations in Germany

Where do the Germans like to go on vacation? And how well do they know their barbecues? Meet the Germans host Rachel Stewart answered these questions and more during a summer-themed livestream on YouTube. Catch up here! 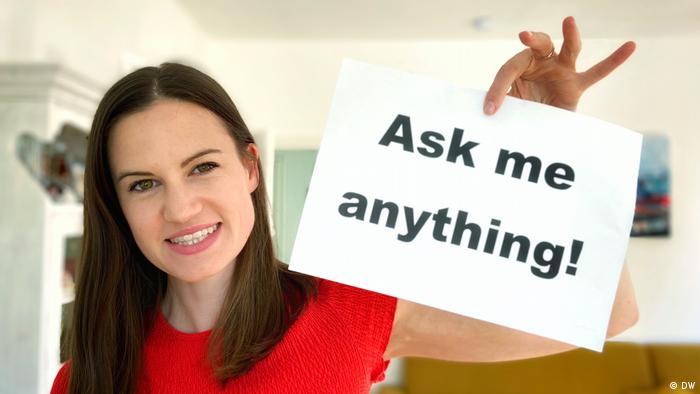 Thank you to everyone who tuned in for the second live session of Meet the Germans on Youtube. Host Rachel Stewart answered questions on holidays and summer in Germany from viewers all around the globe. Here are a few of the highlights — and you can catch the whole video here.

How do barbecue habits in Germany differ from those in the UK?

Rachel: The obsession with meat is very noticeable here. There's also the seriousness of the way you talk about the barbecue itself. I reckon most Germans can talk with a lot of confidence about the positive attributes of a particular type of grill. Is it gas or coal? Is it efficient? Which brand do you have? And they're usually quite expensive — people will invest in a barbecue because it's very important.

Will lots of people in Germany be doing a "staycation" (staying in their home country for their vacation) this year?

Yes. Because of the current situation probably more people than usual will be doing that. But a lot of Germans prefer to stay in Germany anyway — there's lots of domestic tourism. There's a great word: "Balkonien." If you're having a staycation, and you're really staying at home, people will say: "I'm going to do my holiday on 'Balkonien'" — which is a bit like saying "balcony land." It means you're just going to stay on your balcony and have a little holiday there.

Read more: 10 places Germans like to hang out in the summer

Yes, definitely! And if you do decide to do that, you'll be in very good company, because people here love camping and they love camper vans. It's something that, at the beginning, I couldn't really buy into because I didn't want to bring all my stuff with me on holiday. The idea of a camper van, where you basically bring some of your home along with you on the road, seemed quite a bizarre idea to me. Now I think about it, it's quite a German idea: very practical, quite efficient, just having everything you need right there.

Read more:  10 expressions for traveling in Germany that you won't find in a guide book

What do you think is the reputation of Germans when they're abroad or on holiday?

In my experience, Germans really are everywhere. Even when I've been to more far-flung places, you almost always come across a German. German and Dutch people you'll find everywhere. I guess it's probably typical that German tourists will have a plan; they'll have researched everything beforehand and made notes and they'll definitely have a guide book with them, to make sure that they get to see all the best aspects. They're maybe less spontaneous than other tourists... but that might mean that they see everything!

One very classic holiday destination is Mallorca, which is a Spanish island. It has its own nickname — the Germans call it "Malle" — and it's got a bit of a reputation as the party destination. There's a particular beach area called Ballermann, which is very much the hub of German drinking — or at least it was. They've actually tried to crack down on that recently. The locals have said they don't want so much mass tourism and certainly not so much boozy tourism. Actually, there's a British contingent on Mallorca as well. There's the Bay of Palma, and on the one side, in Magaluf, is where all the drunken Brits are, and on the other side is where the Germans are. That's a slightly negative parallel between my home country and my adopted country!

Can you recount a relatively embarrassing experience with the German language?

Something that springs to mind is the really simple mistakes that I was making early on and nobody corrected me. I learned that in German the "j" is pronounced like an English "y" – like in "Joghurt." But I was then using that rule for words that actually came from English, and in those words you don't actually change the sound. So, for example, I would say that on the weekend I was going "yoggen" if I was going jogging, and actually you would just say "joggen," with a hard "j."

Another example was that I used to always say "angenehm" when I met people for the first time. That's actually really, really formal. It's like if I would go up to someone and say, in English: "Terribly pleased to meet you." Nobody corrected me, so I was walking around saying "angenehm" in really casual situations for a long time.

You can now get your daily dose of Meet the Germans over on Instagram at @dw_meetthegermans.

It's summer in Germany. That means people go on vacation, jump into their local pool and enjoy the warm sun. Here are 11 German words you might hear often this time of year. (04.07.2018)

Can't get enough 'Meet the Germans?' Host Rachel Stewart is taking the hit series to Instagram! Get ready for 365 days of videos, photos and more, all with the MTG signature touch of hard facts and sharp humor. (24.06.2020)