Whether you like it or not, Donald Trump has proven his popularity across the US. But how do people feel about the president-elect in his ancestral home village in Germany? 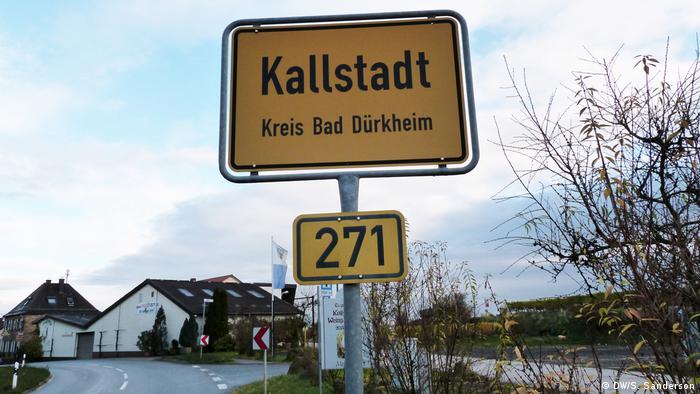 Driving into Kallstadt is a bit like driving onto the set of the 1990s mystery TV series "Twin Peaks:" a sleepy village with a dark secret tries to hide away from the rest of the world. However, Kallstadt's secret is long out of the bag, and locals are struggling to play catch-up, as their hometown is catapulted into the heart of contemporary politics.

When Donald Trump announced his initial candidacy for president, the first round of news reporters descended onto the hidden village near Ludwigshafen, where Trump's grandparents hail from. When he was confirmed the Republican nominee, the place made global news and attracted its first set of TV crews. And with his election win, Trump almost made Kallstadt more famous than its highly rated wine.

A woman working at local bakery "Sippel" isn't best pleased with all this attention.

"They set up their cameras in the middle of the night and started ringing on doorbells as soon as the result was confirmed at 6:00 in the morning," says Frau Rüde, who appears to be so fed up with media enquiries that she won't offer a first name - but did speak with DW.

"And then they chased away customers, with their reporters standing outside my doorstep so they could get the church tower in the picture."

The same sentiment seems to be echoed across town.

Much ado about nothing?

Ringing the doorbell of Trump's grandfather's house is an exercise in futility. A small sign already turns visitors away, saying the estate is for sale so that its private owners can move away somewhere "where they won't be bothered by the press and media hustle in our own home again."

If the house were still in Trump's own hands he might have turned it into a museum - or built a Trump Tower in its place? Builders working two doors down say they've grown accustomed to all the attention paid to "the famous house." One of them says he doesn't know much about Trump, so he can't say how he feels about him, while the other one is quick to dismiss the president-elect as someone he decidedly dislikes.

The two builders seem to be working on landscaping the garden of what would appear to be the most luxurious and lavish-looking new-build in town. One can't help but wonder whether Trump the businessman many have his finger in this project, too.

If that were the case, however, he would certainly not be welcomed with open arms, it seems. Jörg Dörr, who runs the local tourism office, says that about 100 press representatives have either visited Kallstadt or been in touch with him on the phone since it became evident that Trump was the last remaining Republican candidate.

"It's been well over 100 years since a direct relative of Donald Trump was in Kallstadt, in 1905. At that time, his grandfather left Kallstadt and Germany for a second time, as he had earlier emigrated from Germany illegally," he says, making sure he distinguishes audibly between the name of President-elect Trump and his Kallstadt ancestors, whose name Dörr pronounces the German way, "Troomp."

While Donald Trump's relationship with illegal immigrants in the US might be described as difficult at the best of times, the illegal emigrant status of his grandfather, who was practically exiled from Germany after shirking his military duty, not only makes for great irony but also explains why the name Trump in all its variations has all but died out in Kallstadt.

The local cemetery, surrounded by vineyards along lush hills, features two gravestones engraved with the name "Trump," but the tourism office stresses that while these very likely are distant relatives of Donald Trump, their exact relationship to the president-elect has not been established. Preceding variations on the family name, such as "Trumpf" and "Drumpf" cannot be found at all.


Also featured on the same small graveyard are tombstones belonging to the Heinz family, another great American dynasty that started out in the unassuming little village. But like the Trumps, the Heinz relatives also appear to have taken the secret of their relation to the American oligarchs to their graves.

You might almost be tempted to think that the delightful scenery here with all its rich fall foliage could be a charming town in New England, where such names as Trump and Heinz are considered to be part of the local heritage, and synonymous with success and global business empires. But people across Kallstadt seem to find that the past year left a bad taste in their mouths when it comes to their mention.

"This has nothing to do with us, the Trump and Heinz families. I don't know why everybody keeps asking," scoffs a lady working at a local hotel.

"I don't want anything to do with it. There's been so much media attention here, and I fear that this is only the beginning. We really don't want this here."

Meanwhile a young waitress at a restaurant acknowledges the silver lining on what many locals seem to view as a dark cloud, saying that Trump has been good for tourism. She adds quietly, "Whether all that is good on the long run or not, I don't know." Like most people in the village, she, too, has become surprisingly camera-shy despite - or probably because of - all the unwarranted attention.

The only person who seems to feel obliged to answer questions is still Jörg Dörr, whose tourist office has never been as busy as in the past year. Dörr takes his duty as a brand ambassador of Kallstadt seriously, explaining that it will take a while for locals to own up to Donald Trump's connection to the village, and that it is yet to be seen whether they ultimately will even want to be associated with him or not.

"Like everywhere else, people in Kallstadt are feeling a bit bashful [about commenting on Trump's election win]. The general impression of Trump is based on the reporting on his statements from his election campaign, which were controversial to say the least.

"He is a polarizing character. He'll have to prove himself in office, and if he manages to become a good president, people in Kallstadt might begin to feel proud of him."

An election, a wine cooler and ketchup in Trump's German village

In the German wine village where Donald Trump's grandfather was born, DW's Janina Martens found out what the teetotalling presidential candidate could drink instead of wine - and what the town has to do with ketchup. (04.03.2016)

Donald Trump's ancestors came from a tiny German wine village. We asked locals what they think of the US presidential candidate - and found out that the "Drumpfs" are long gone. (03.03.2016)

The ancestors of "anti-immigrant" crusader Donald Trump come from a small village in western Germany. The documentary film "Kings of Kallstadt" explores the modest roots of the family's real estate empire. (29.02.2016)

My picture of the week | Americans who feel left behind