Candidates Macron and Le Pen held political rallies in the French capital to woo undecided voters. But on this Labor Day celebration, many French workers are divided over whom, if anyone, to vote for. 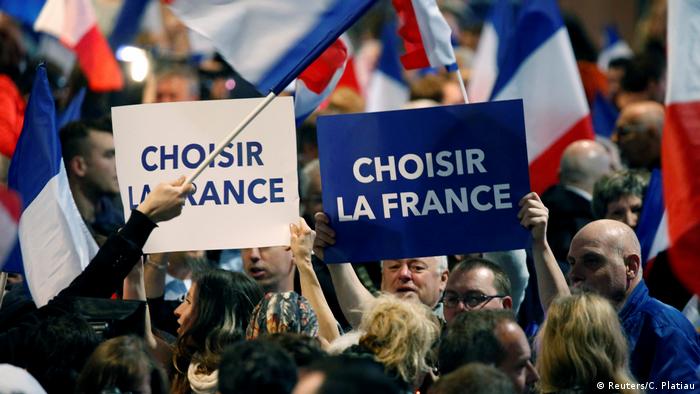 As is tradition, French workers take the spotlight on May 1 in Paris. But this year, there is a crucial and defining difference. Not only did various traditional rallies celebrate the annually occurring International Workers' Day, but the two French presidential candidates also held campaign events that sought to win the votes of disenchanted left-wing voters ahead of the May 7 runoff.

In a sign of ongoing national division and significant voter alienation, demonstrations against both politicians and their platforms coincided with the political rallies.

Read more: Le Pen versus Macron - where they stand

Dupont-Aignon struck an ominous tone in his remarks, claiming that Macron wants to keep France in the "EU jail" whereas Le Pen would promote cooperation between nations on specific projects.

"Electing Emmanuel Macron, a junior, immature and troubled version of Francois Hollande, would mean locking up France definitively in the EU jail," Dupont-Aignon argued, comparing the 39-year-old independent to the current Socialist president, whose presidential popularity has reached historic lows.

"What's at stake this Sunday, what's at stake in 2017, is saving France," Dupont-Aignon said, adding that a Macron presidency would mean "to say goodbye to our values, to our identity."

Taking the stage after Dupont-Aignon, Le Pen greeted thousands of flag-waving supporters by lambasting Macron as a candidate of "the caviar left" and part of "a morbid continuity" within French politics.

"Saying 'new' four times in a row is not enough to make you the embodiment of novelty," she declared.

Le Pen has sought to present herself as a candidate from outside the political establishment. She has also actively courted the support of the blue-collar workers who cast their ballots in the April 23 first round for far-left candidate Jean-Luc Melenchon.

She acknowledged Melenchon's voters in her speech, saying the leftist candidate had been condemned by the media for not endorsing Macron after the first round of voting.

"It is forbidden under pain of excommunication to call for support for a second-round candidate who isn't the system's candidate," Le Pen said.

Macron began the day on the banks of the Seine paying tribute to Brahim Bourram, a Morrocan man who drowned 22 years ago after being pushed into the river by skinheads who had been attending the May Day rally of the National Front. At the time, Marine's more radical father, Jean-Marie Le Pen, headed up the party.

"I will fight up until the very last second not only against her program but also her idea of what constitutes democracy
and the French Republic," Macron said from the bank of the Seine and alongside Bourram's son.

Macron also challenged the idea that Le Pen had distanced herself from her father's extremism. "The roots are there, and they are very much alive," he remarked.

The pro-business Macron's own rally began at noon near the science complex in La Villette. The choice of location is part of a move to present himself as the future-oriented innovator France needs to rejuvenate its economy. The former investment banker and economy minister will speak at 5 p.m. (16 UTC).

Trade unions also took to the streets in their traditional May Day marches, but the election remained at the forefront of their message. While unions across the board reject Le Pen, they lack overall political unity, due in part to Macron's controversial proposed labor law reforms.

The more moderate unions, including CFDT and Unsa, marched on Monday morning alongside anti-racist and gay rights organizations in support of Macron, tweeting their support for the centrist candidate.

However, other more radical unions continued their refusal to endorse Macron.

The formerly communist CGT, which is also France's largest union, gathered at the Place de la Republique in the afternoon to voice their call that "not a single vote" should go to Le Pen. The CGT has blamed the "liberal policies" of Macron as the cause of the first-round results, but it rejects any view of Le Pen and Macron as equal political evils.

Macron and Le Pen "are not the same thing," CGT leader Philippe Martinez said, adding he "deeply disagreed" with the idea that they are the same.

Echoes of the National Front's past

Meanwhile, Jean-Marie Le Pen headed up his own rally in Paris on Monday morning, leading an annual march from the statue of the legendary French heroine and FN nationalist icon Joan of Arc to the Paris Opera house. He called on the French to vote for his daughter in Sunday's run-off.

"She is not Joan of Arc," the 88-year-old politician said, "but she accepts the same mission ... France." 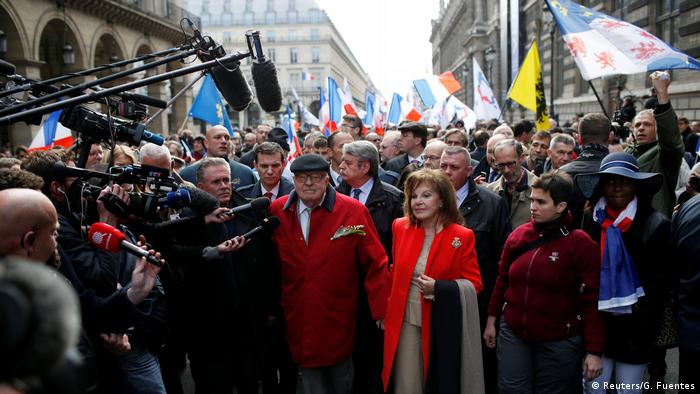 Far-right presidential candidate Marine Le Pen has denied French responsibility for a major Nazi-era roundup of Jews. The statement has invited comparisons to her father's notorious 'detail of history' comment. (10.04.2017)

Inside Europe: France at a crossroads