Le Pen′s ′outsider′ politics move to center stage in France | Europe| News and current affairs from around the continent | DW | 30.04.2017

French far-right presidential candidate Marine Le Pen's round one victory was spared the public outrage that met her father's push through to the runoff in 2002. The National Front has gone mainstream. 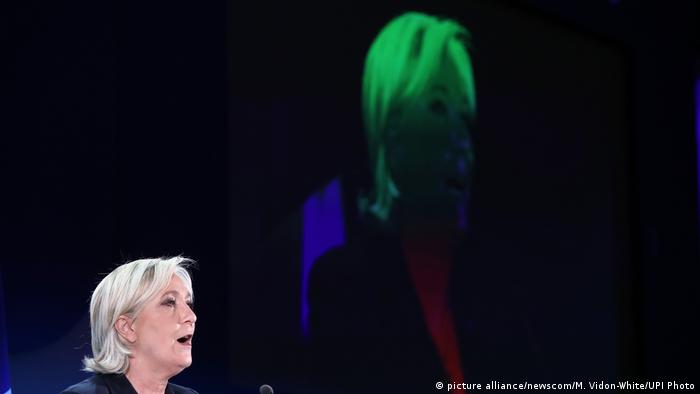 Her father, party founder Jean-Marie Le Pen, made it to the second round against Jacques Chirac in 2002 thanks to a mix of complacency and abstention on the left and a protest vote against the establishment elite. Headlines called it the "shame" of France.

Inside Europe: The evolution of Le Pen

Inside Europe: The evolution of Le Pen

An estimated 1 million people marched in the streets of Paris against Papa Le Pen, a convicted Holocaust denier.

Centrist political newcomer Emmanuel Macron is predicted to soundly beat Le Pen by as much as 20 percent on May 7. Le Pen's score would still be more than double her father's 2002 campaign.

'Part of the political landscape'

Even if a 2017 Le Pen presidency is a long shot, the far-right agenda has firmly taken root in mainstream French politics. 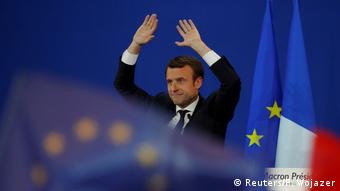 "They are really part of the political landscape now and they will remain. Especially since many young people vote for them," said Jean-Yves Camus, a French political analyst who writes about extreme right movements in Europe.

Europe's nationalist factions have been around since the end of World War II. Camus says what's new is these parties now take between 14 and 45 percent of votes.

The FN has come a long way from being a so-called political outsider to the leading anti-EU party. Through a process the party has termed "de-demonization," Le Pen has tried to scrub the FN of its racist reputation since taking over in 2011. She even went as far as kicking her father out of the party.

Le Pen supporter Marie da Silva, 52, recently switched her vote from the center-right Les Republicains. "The programs of others aren't as good as they say. We have to close the borders. It's important. Europe is finished. The euro is terrible," she said at a Le Pen rally in Paris.

FN specialist Cecile Alduy says that as working-class disappointment with mainstream parties has risen, Le Pen's message of blaming the elite has resonated with those who feel forgotten by the state.

"The National Front has managed to build roots by replacing the Communist party and talking with the same language in many ways … big business ruining the working class. Increasing minimum wage, increasing small retirement funds," Alduy said. "She has a little bit of everything for everyone." 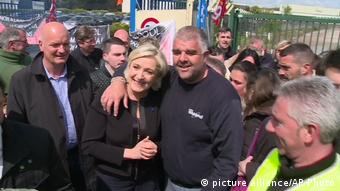 Le Pen has declared herself the candidate of France's workers

Though Le Pen's gender hasn't been a main feature of her presidential bid, Alduy says a woman at the head of the FN has somewhat softened its snarl. In a campaign video, Le Pen describes herself as a woman concerned about fundamental Islam in France, and as a mother worried about the future.

"She's used the gender card to promote a specific agenda and so-called feminism only to attack Islam. In a way it serves her well to be a woman because she looks less aggressive than her platform and her father obviously," Alduy said.

Le Pen has shifted the party's polarizing anti-Semitic rhetoric from her father's leadership and has focused on the EU and globalization as sources of France's problems. Her message of sovereignty has struck a chord with many young voters.

"The difference is that she does not use those divisive topics simply because there is no interest for those between 18 and 24," Camus said. "They have no knowledge of the war. Their interest is in unemployment, immigration and unemployment."

"When you are in front of her you know that she's the boss. For us it's very important to have a boss who is a leader," de Rigne said.

Camus says the young people who vote FN "are not fascists. They are simply nationalists. They are the next generation of National Front leaders."

Le Pen divides France into two camps. Today's political battle, she says, is between patriots - those who love France - and mondialistes, pro-EU globalists, like her opponent Macron. Political analyst Pascal Perrineau from Sciences Po university in Paris calls the Macron-Le Pen runoff the split of the 21st century.

"There are two Frances: a cosmopolitan one that is doing well, and another hit by unemployment and worried about its identity," Perrineau says. "These parties express a radical new split between open society and a closed society of national re-centering."

Christophe Barbier, a political journalist at French newspaper L'Express says Macron is France's last chance at a moderate government. If things don't go well, he could be the man that ushers in a Le Pen presidency.

"If Macron fails, the next president will be Marine Le Pen or Marion Marechal Le Pen (her niece)," Barbier said. "It's the last chance for France to fix the country before a mortal adventure with populism."

The will of the FN can still dig in further in June's legislative elections if Le Pen loses the runoff.

It only took Macron a year to build his political movement that's put him at the gates of the Elysee. A five-year presidential term goes fast. But Le Pen won't have to wait until 2022 to launch her political revolution. She has already brought it.

The two candidates have raised the stakes in France's presidential election. They both seek reform, but offer polarizing visions for France's future and its place in the world. DW examines their positions on hot issues. (27.04.2017)

Inside Europe: France at a crossroads

Inside Europe: The making of Macron

France: it's between Macron and Le Pen

How much of a threat is Marine Le Pen? Evelyne Gebhardt (Member of the European Parliament) speaks to DW