Germans took to the streets in vast numbers on Saturday to send a clear signal of defiance against the social reform programs implemented by Chancellor Gerhard Schröder's government. 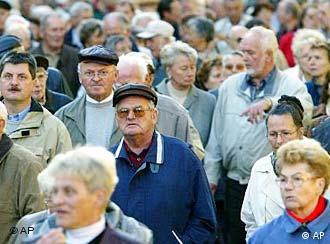 Organizers say that almost half a million demonstrators turned out to protest against Germany's reforms.

Nearly half a million people turned out in three major German cities to express their anger and to urge the Social Democrat-Green coalition government to roll back the Agenda 2010 social reform programs which they said would reduce federal funding in welfare and health services as well as pension benefits.

In marches, rallies and demonstrations organized by trade unions and an array of social lobby organizations, anti-globalization groups and anti-war activists, the cities of Berlin, Cologne and Stuttgart throbbed with protest as huge crowds heeded labour union calls to "stand up and be counted."

In the capital, 270,000 protesters converged on the highly symbolic Brandenburg Gate blowing whistles, holding placards proclaiming "social demolition creates no jobs" and waving union flags in the biggest rally yet against the chancellor's year-old reform drive while 100,000 took to the streets in Cologne and 125,000 in Stuttgart, according to statistics issued by the organizers.

Speaking at the rally in Berlin, Michael Sommer, head of the German Labor Federation, said that the huge turnout was a "a clear signal to those in power" that working-class Germans oppose the government's attempts to rekindle the national economy by paring social-welfare, health and pension programs.

In Cologne, Jürgen Peters, the head of German manufacturing union IG Metall, told the throng of protestors, "We're fed up with so-called reforms that we have to pay for but others benefit from."

Chancellor says there's no turning back

In an attempt to pre-empt the demonstrations, Gerhard Schröder acknowledged that he had "failed to get the message across" to many Germans that his reforms are necessary to rejuvenate the nation's economy and to avert bankruptcy of national health and pension systems.

"When you organize a reform process, you have a problem - the burdens become apparent immediately," Schröder said in a radio interview on Friday. "The positive effects will come later."

"If you look around Europe, you will see that all its governments have a lot of explaining to do," he added. "But we must carry on explaining patiently and put up with the fact that polls don't look how we would like them to."

"There is no turning back," he concluded.

Many still distrust Schröder's insistence that he has no intention of dismantling the welfare state and have made that distrust well known. In response, Schröder has argued that he can only preserve the welfare state for future generations by pressing ahead now with cuts, but that has done little to dampen resentment over higher health-care costs and a freeze of retirement benefits this year.

Confronted with populations that are aging rapidly, Germany and other European nations are attempting to reform generous, and expensive, welfare systems. But these efforts have been met with fierce resistance across the continent, along with complaints that pensioners and the jobless are bearing an unfair share of the pain.

Saturday's demonstrations were part of a "European day of action" that also drew tens of thousands of pensioners onto the streets of Rome to demand higher pensions and complain of steep increases in their cost of living and brought thousands of French out into the streets of France to call for "a more social Europe."

The Europe-wide protest was summed up by one demonstrator on Saturday: "I hope people will start to wake up and realize that these so-called reforms are nothing but a radical program of social demolition," said accountant Hermann Lehmer, 56, one of the protesters in Berlin.

"These are reforms for politicians, not for people."

Tens of thousands marched through Germany’s capital city on Saturday to voice their opinions against painful cuts to the government-subsidized public healthcare system and reforms to the labor market. (November 2, 2003)

Bavaria's decision to force state civil servants to work a 42-hour week has incensed German trade unions, which are now threatening massive labor unrest to halt the plans from spreading in the public and private sectors. (April 2, 2004)

German Chancellor Gerhard Schröder on Saturday defended his reform course at a regional party congress of his Social Democrats, rejecting calls that the government's welfare cuts were jeopardizing the party's future. (February 14, 2004)