Mass grave of Yazidi women killed by 'IS' found in Iraq

Iraqi Kurdish forces have discovered a mass grave containing the bodies of women who were executed by the 'Islamic State' (IS). The UN has described the brutal campaign against the Yazidi minority as a possible genocide. 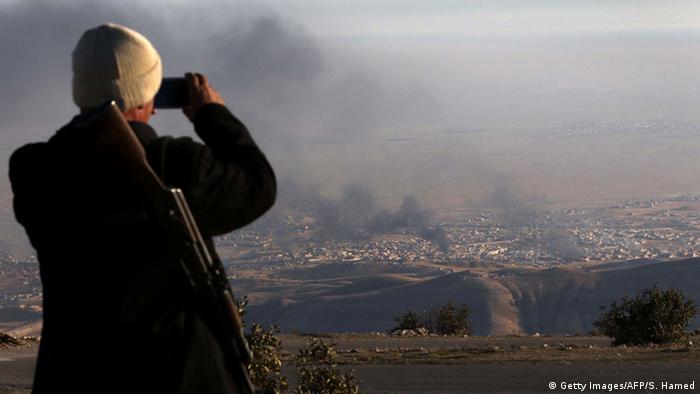 The bodies of an estimated 80 Yazidi victims were found in a mass grave on the edge of the city of Sinjar in Iraq on Saturday, according to local reports. Kurdish forces discovered the grave while clearing bombs from the area which was recently reclaimed from 'IS' militants.

Officials were able to locate the grave based on information provided by young women who witnessed the executions and escaped IS enslavement. Although the grave has yet to be excavated, Miyasir Hajji, a local council member for Sinjar, told AFP that it is thought to contain the bodies of around 78 women who were 40 to 80 years-old.

"It seems that the (IS) terrorist members only wanted young girls to enslave," Hajji said. Yazidi residents in Sinjar were targeted as part of an IS campaign which included mass murders, enslavement, and rape.

'Death would have been better'

Clumps of hair, bones, money and keys were found at the grave site by the mayor of Sinjar and local Yazidis. The items allegedly belonged to older women from the village of Kocho who were separated from the young by IS militants during their attack.

According to local survivors, after being separated, the older women were led behind a building and shot while the younger women were taken as sexual slaves.

Reuters spoke with 24-year-old Badr Sleiman Taha from Kocho who said his mother, aunt and grandmother were among those shot behind the institute. While at the mass grave, he recognized the cane of an old woman from his village among the remains.

"Death would have been better than what I felt when I saw that grave," Taha told Reuters by phone from Sinjar.

Several mass Yazidi graves had already been discovered in the area north of Sinjar mountain, which was retaken from IS in December of 2014.

The United Nations has already described the IS campaign against the Yazidis as a possible genocide. Mahma Xelil, the mayor of Sinjar, announced that the grave would remain undisturbed so that experts could collect evidence to help build their case.

US President Barack Obama justified the country's air campaign against IS militants in the area last year by invoking the duty to prevent a Yazidi genocide.

The Yazidi are a religious sect whose beliefs combine elements of several ancient Middle Eastern religions and are considered devil-worshipers by IS militants.

Currently, Kurdish peshmerga forces are clearing explosive devices left by IS in Sinjar before Yazidi residents can return to their homes.

As Kurdish-led forces stormed the "Islamic State" controlled city of Sinjar, online foot soldiers were also waging a war on social media. For many Kurdish and Yezidi users, their mission to #FreeSinjar is personal. (12.11.2015)