Kurds claim Sinjar 'liberated' from IS

Iraqi Kurdish leader Massoud Barzani has declared victory against the "Islamic State" in Sinjar. Kurdish forces faced little resistance as they entered the town, but officials have warned the town must still be cleared. 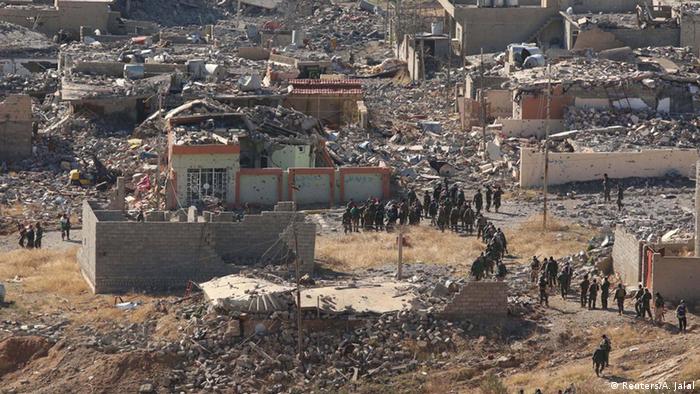 Kurdish forces raised their flag in the center of Sinjar on Friday after encountering little resistance from IS, as Iraqi Kurdistan's President Massoud Barzani claimed the town had been "liberated" in only a day.

US and Kurdish officials had earlier cautioned against claiming victory too soon. The town still needs to be cleared of IEDs and booby-traps, and Kurdish fighters could still face suicide bombers.

The light resistance put up by IS suggests they either fled or could stage a counterattack.

US Secretary of State John Kerry said on Friday that he was "absolutely confident" Sinjar would be liberated.

"There are some entrenched IS fighters, but we are absolutely confident that over the next days Sinjar will be able to be liberated," Kerry said during a visit to Tunisia.

Backed by US air power, the operation includes some 7,500 peshmerga alongside Yazidi units. Turkey's banned rebel group, the Kurdistan Workers' Party (PKK), also played a role despite a long simmering rivalry between Barzani's Kurdistan Democratic Party (KDP) and the PKK, the two leading Kurdish nationalist groups across the larger region.

The swift victory in Sinjar gives a boost to the US and Kurdish campaign against IS by cutting a main supply road between Mosul, Iraq's second largest city under the control of IS, and the group's de facto capital in Raqqa, Syria. The victory also opens up a third, western front for any future assault to wrest control of Mosul from IS.

Barzani told reporters Sinjar's liberation would "have a big impact on liberating Mosul."

The Sinjar offensive comes as PKK-affiliated forces in Syria, the People's Protection Units (YPG), and Arab militias are planning an assault on Raqqa, backed by US Special Forces and air power. The Syrian Kurds have engaged in intense fights with IS along the border. On Friday they took the strategic town of al-Houl.

Retaking Sinjar is likely to hinder IS's ability to move forces and equipment between Iraq and Syria ahead of an assault on the de facto IS capital.

The victory gives Barzani a much needed boost at a time of domestic political crisis in the Kurdistan Region of Iraq. Barzani and his KDP face an opposition crying foul on corruption and waste, months without pay for civil servants and peshmerga, and the president overstaying the constitutional limits of his term.

Peshmerga militia fighters tied to Barzani's KDP came under criticism last year after they fled an IS assault on Sinjar, leaving the minority Kurdish Yazidis, who follow a syncretic religion deemed heretical to hard-line Islamists, open to slaughter and other atrocities.

Thousands of Yazidis were forced to flee, hundreds were killed, and girls and women were enslaved. The plight of the Yazidis brought the barbarity of IS to international attention.

A wider-scale slaughter was prevented by the US-led air campaign, and the intervention of the PKK and its Syrian affiliate, the YPG. The PKK maintained units to fight IS in the Sinjar area over the past year and trained Yazidi forces.

The groups' intervention bolstered its standing in the Kurdish nationalist movement compared to Barzani and the KDP.

Tensions and vying for influence in the Sinjar area are likely to continue after the area's liberation from IS. PKK forces complained about KDP media control over the narrative and Barzani taking all the credit. Iraqi Kurdish political opposition parties also complained about a media blackout for their reporters, and said that the participation of other groups' militias in the fight was being ignored.

"We promised, we have liberated Sinjar," Barzani said in Sinjar. "It's time for the Yazidi girls to raise their heads up. Revenge has been taken for them."

"Sinjar is very important because it's become a symbol of injustice against the Kurdish people," he added.

"Sinjar was liberated by the blood of the peshmerga and became part of Kurdistan," Barzani said.

Baghdad and the Kurdistan region have a long-running dispute over territory that has only grown as Kurdish forces expanded territory under their control during the fight against IS since last year.

Some Yazidi groups at odds with the KDP have also said they would like to form a separate autonomous region within Iraq.