Antifascist protesters marched in Sarajevo as the local Catholic cardinal served a mass for "Bleiburg victims" executed by Yugoslav partisans at the end of World War II. Most of those killed were pro-Nazi militants. 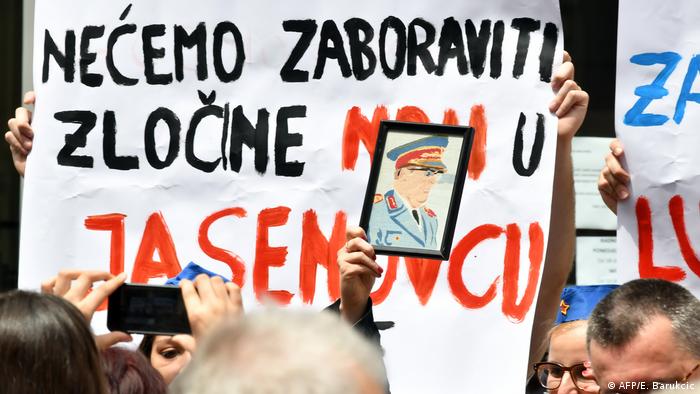 Bosnian Cardinal Vinko Puljic held a mass to honor "Bleiburg victims" who died when the Yugoslavian communist regime executed thousands of mostly pro-Nazi militants in the immediate aftermath of WWII. The group also included a large number of civilians.

Leading the Saturday ceremony in Sarajevo, the Catholic cardinal said that "the victims cannot be forgotten" and that the prayer was aimed to "cleanse all bitter feelings and negative tensions that come up when the victims are remembered."

Only 20 people attended the service in the Sarajevo cathedral due to the coronavirus restrictions.

Read more: Neo-fascism on the rise in Croatia, Council of Europe finds

'It is not normal'

Meanwhile, thousands of protesters marched through the city in opposition of the event. The protesters slammed the mass as a thinly disguised attempt to rehabilitate Nazi collaborators, most notably Croatia's Ustasha militia that served the wartime fascist regime in Zagreb. With the support of the Axis forces, Ustasha held sway in Croatia and large parts of Bosnia, where they predominantly targeted Serbs and Jews during WWII.

In the closing months of the war, the Ustasha militia implemented a brutal terror campaign in Sarajevo, which included a public hanging of 55 of the city's residents. Over 10,000 residents of Sarajevo are believed to have lost their lives during the occupation.

On Saturday, anti-fascist protesters posted pictures of the hanged residents and displayed a banner reading "I am anti-fascist too" across Sarajevo's main street.

"My two grandfathers, their brothers and my grandmother were all killed by these fascists who have been honored today," 63-year-old retired electro-technician Cedomir Jasksic told the Reuters news agency.

"It is not normal that a city such as Sarajevo... allows something like this to happen," he added.

Catholic Zvonimir Nikolic described the mass as a "disaster for Sarajevo," while Bosniak Sead Sahovic, who was born in the Ustasha concentration camp Stara Gradiska, slammed the commemoration as a "horrifying farce."' 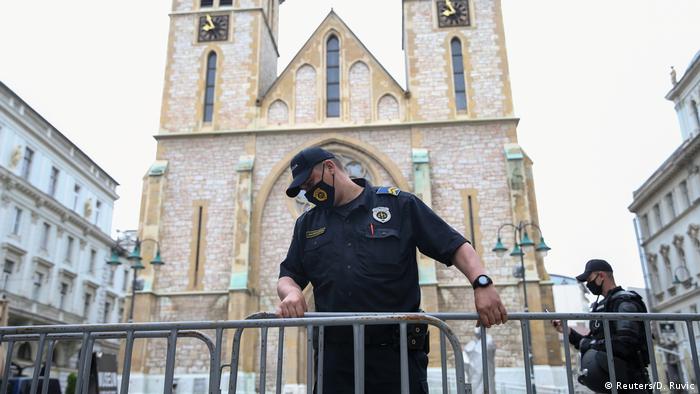 The decision to hold the mass prompted a storm of criticism in Bosnia & Herzegovina, including a condemnation from the Israeli and the US embassies. However, the Croatian parliament endorsed the event, and the country's ambassador to Sarajevo attended the Saturday mass.

In the days leading up to the commemoration, Cardinal Puljic seemed to shrug off the accusations of praising Nazi collaborators.

Talking to Croatian Catholic Radio, Puljic said that "the Church has always respected innocent victims" and was the mass was not intended to celebrate anyone.

He added that a "crime cannot be defended by (another) crime."

Canceled due to coronavirus

With the breakdown of Nazi Germany in April and May of 1945, members of pro-Nazi militias from various parts of Yugoslavia fled towards Austria with their family members. Their goal was to surrender to British forces at Bleiburg, but the British army rejected their surrender and extradited them to Communist forces, which also included a large percentage of ethnic Croatians. Many of the prisoners were executed without trial during the return march through Slovenia.

The executions remained a taboo topic until the breakup of socialist Yugoslavia in the early 1990s. A large event to commemorate the victims is now held annually in Bleiburg, with many of the visitors displaying Ustasha and Nazi symbols. Last year, the Austrian diocese denied permission to hold a mass at the site, prompting criticism from their Croatian counterparts. It also prompted a reaction from Croatia's then-president, Kolinda Grabar-Kitarovic, who said that she "deeply regrets" the ban as a "Croatian and a woman of faith." The Bleiburg rally of 2020 has been canceled due to the coronavirus pandemic.

A cardinal intends to commemorate fascists executed in 1945 after being sent back to Yugoslavia from Austria. The EU and Catholic Church must take a stand, the German politician Christian Schwarz-Schilling writes. (16.05.2020)

Nearly 660,000 hectares of European land have already been destroyed by fires this year, according to EU data. The scale of the destruction would be the worst since records began in 2006.