Croatian President Zoran Milanovic has walked out of a war of independence memorial event when some of the participants displayed a slogan used by the pro-Nazi Ustasha militia. PM Andrej Plenkovic criticized the exit. 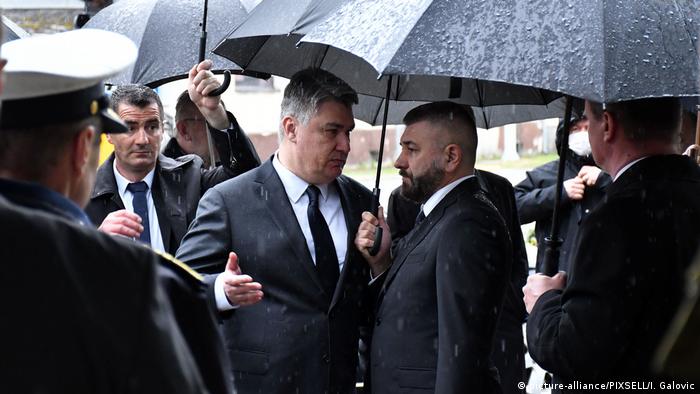 Milanovic walked out of the Operation Flash anniversary gathering, which was also attended by Prime Minister Andrej Plenkovic and veterans of the 1990s war, when at least two of the attendees displayed the slogan "For home(land) ready" on their T-shirts.

The slogan gained notoriety in WWII when it was used by Nazi collaborators from the Ustasha movement as the equivalent of the German "Sieg Heil." The Ustasha primarily targeted Serbs living on Croatian territory, who were killed, persecuted, and sent to concentration camps. The most notorious of the camps, Jasenovac, saw at least 83,000 Serbs, Roma, and Jews lose their lives. At the end of the war, the Ustasha were defeated by the Communist resistance forces who set up their own rule in multinational Yugoslavia.

In the early 1990s, however, the breakup of Yugoslavia pitted Croatian independence fighters against Serb forces. Croatian militants rehashed the Ustasha symbols, including the "Fore home(land) ready" to use on their own markings. The slogan is used today by Croatian right-wingers as a symbol of victory in the 1990s war. Others label it a fascist salute. The latest court battle over its legality ended in February with a divided court unable to reach a decision.

On Friday, the left-wing President Milanovic said that displaying the slogan at the memorial event was "an intentional provocation that we counted on" would happen.

"The slogan 'For Home(land) ready' does not belong at this place," he said in an official statement.

Milanovic took over as president in January this year after beating conservative incumbent Kolinda Grabar-Kitarovic. The government is still run by the conservative HDZ party, which is often criticized for flirting with ultra-nationalists.

The right-wing prime minister also criticized Milanovic's speech made in Jasenovac last week. At the time, the president slammed the installation of a plaque bearing the Ustasha slogan and the names of 1990s independence fighters at the death camp, which happened several years ago. Under the pressure from the public, the plaque was later moved to a town some 10 kilometers (6 miles) away. Milanovic said the plaque should be thrown away completely.

On Thursday, Plenkovic said that everyone who died for Croatia "has my respect."

"You will never hear from any of us here that the plaque with the names of the defenders who died for Croatia should be thrown away," he told reporters.