Ahead of the EU elections, placards put up by a Serb minority party in Croatia have been defaced with hate messages in several cities. Croatia, an EU member, struggles with nationalism and strong anti-Serb sentiment. 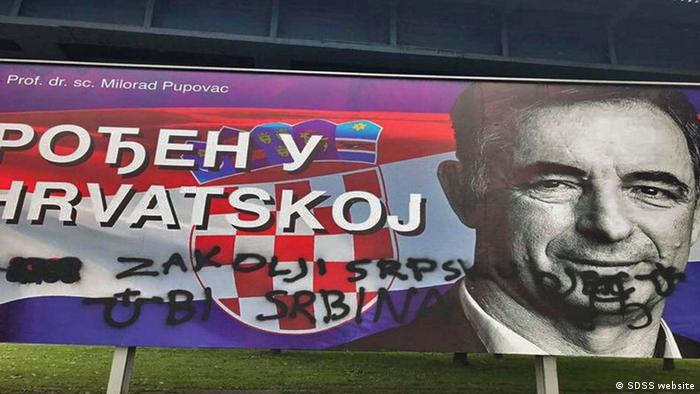 Political ads for a Serb party in Croatia have been repeatedly defaced with symbols of Croatia's pro-Nazi Ustasha regime and anti-Serb slogans amid the campaign for the EU Parliament.

A photo posted by Serb representative Milorad Pupovac on Tuesday shows a billboard in Zagreb (pictured above) with a scribbled message "Slaughter Serb children, kill the Serb."

Similar hate messages drew media attention in several other cities, including the popular tourist destination of Split earlier this month. In the seaside resort, Ustasha slogan "For home(land) ready" was added to the billboard of Pupovac's Independent Democratic Serb Party (SDSS).

Read more: Neo-fascism on the rise in Croatia

The attackers in Split also called for Serbs to be hanged and urged the Serb minority to "start up their tractors" as a reference to rural Serb population fleeing Croatia in 1995, at the end of Croatia's independence war.

Commenting on the incident in Split, Pupovac said his party's posters were directed against "prejudice and hate, which has been spreading through [the] society for years without anyone reacting to it."

Pupovac, who serves as a lawmaker in Croatia's parliament, also responded by taking pictures of himself on a tractor. He said he might use it to travel to Brussels after the May vote, according to "Jutarnji List" daily.

Croatia entered the EU in 2013, but the country still struggles with the aftermath of the bloody breakup of Yugoslavia in the 1990s, which pitted Croatian independence fighters against Serbian troops. Veterans form a powerful political force and the nation's center-right government has been accused of cozying up to war criminals.

Serb and Jewish representatives have also decried rising glorification of the WWII Ustasha and have been boycotting memorials held to honor victims of Jasenovac concentration camp. Members of the Croatian Cabinet have visited an Ustasha-linked memorial in Austria's Bleiburg.

In December, Croatian activist Jure Zubcic altered a xenophobic graffito in Croatia's Zadar, changing it from "Kill the Serb" to "Kiss the Serb," according to the "Slobodna Dalmacija" news outlet. He was then anonymously reported to the police for property damage.

Croatia joins the EU: A new member with old problems (2013)