Neo-fascism on the rise in Croatia, Council of Europe finds

The release of the report comes after a memorial to remember Ustasha militia killed by Communist forces at the end of World War II. The annual memorial has become a meet-up for supporters of the Nazis' Croatian allies. 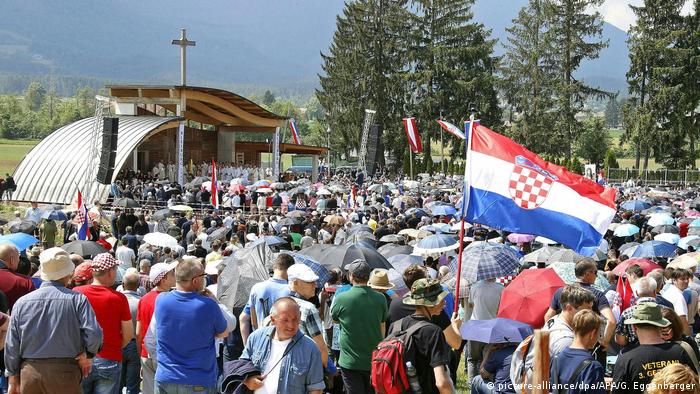 The Council of Europe (CoE) has expressed alarm over the rise of right-wing extremism and neo-fascism in Croatia in a new report published on Tuesday.

The increase has been reinforced by the "glorification" of ideologies from World War II — especially of Croatia's fascist Ustasha regime, which fought alongside Nazi Germany, according to the report by the CoE's Anti-Racism Commission.

Read more: The Hague Tribunal: A death and the painful truth

The report's publication comes three days after the annual memorial mass in Bleiburg, in the Austrian province of Carinthia, to remember the tens of thousands of Ustasha militia members, regime sympathizers and civilians who were killed by Communist forces at the end of World War II.

The report found that some politicians used inflammatory speech to fuel conflicts between different sections of the population, and this did not only apply to extreme parties, but the "entire political spectrum," especially ahead of elections.

The hate speech was often directed against Roma and refugees — particularly Muslims.

According to the report, more than 20 years after the end of the Balkan war, the Serbian minority in Croatia continues to be the target of racially motivated attacks and Serbian houses and institutions are often marked with Nazi and Ustasha symbols.

The report notes that in December 2013, the leader of the far-right Croatian Party of Rights sent a message with "blatantly hateful expressions" to the director of the memorial site to the World War II concentration camp in Jasenovac, where the majority of victims were Serbs.

The message ended with the Ustasha regime salute "Za dom — spremni" ("Ready for the homeland"), a greeting that is just as forbidden in Croatia as the Hitler salute is in Germany. Is it still often seen at the meetings of right-wing extremists and neo-fascists and at certain music events.

Racism in the media

According to the report, there are also dozens of photos circulating on social networks, such as Facebook, showing Croats wearing Ustasha uniforms.

Some media outlets also participate in the hate speech. The report highlighted a case in which a presenter on the popular TV station Z1 TV warned viewers not to walk near the Serbian Orthodox church in the capital Zagreb because their children could become "victims of butchers" there.

The exact number of people killed is controversial, but some 40,000 fugitive soldiers who had fought with Nazi Germany were handed over to the Communist Tito units in Bleiburg with their family members by the British occupying forces. Thousands were killed on the spot or on the way back to Yugoslavia.

Although the memorial mass is an annual event, the gatherings have increasingly developed into a meeting of right-wing extremists. About 10,000 people participated in this year's memorial, including some Croatian government representatives.

In April, Austria's chancellor said he was powerless to stop the commemoration of a 1945 massacre that has become a magnet for supporters of the Nazis' Croatian allies and far-right sympathizers.

"The event taking place is an event organised by the [Croatian] Church," Sebastian Kurz said ahead of the annual May 12 gathering in Bleiburg. "That means it is neither the decision of the federal government nor of the state premier [of Carinthia] and his administration whether this event takes place."

"If there are breaches of [Austrian] law then of course the authorities will act in a very decisive manner," Kurz said.

Opinion: A deadly exit and a glimmer of hope in The Hague

It couldn't have been more dramatic. The convicted war criminal drinks poison in the middle of the court room, dying a short time later. Even The Hague Tribunal's achievements can't overshadow that, says Zoran Arbutina. (29.11.2017)

Reporters Without Borders warns that press freedom is in jeopardy in Croatia. Many journalists are being threatened. Two of them spoke to DW about their experiences in the country. (28.12.2017)

As Yugoslavia fell apart in 1991, a Germany newly put back together dared to unilaterally take action and recognize the independence of Slovenia and Croatia. Was Germany overstepping its authority? (25.06.2016)

Germany pulled the award for Holocaust researcher Gideon Greif, amid criticism of his position on the Srebrenica massacre in which over 8,000 Bosniak men and boys were killed.