The Hague Tribunal: A death and the painful truth | Europe| News and current affairs from around the continent | DW | 30.11.2017

The Hague Tribunal: A death and the painful truth

Outrage in Croatia, approval in Bosnia-Herzegovina and gloating in Serbia: The verdict handed down by The Hague Tribunal has been greeted very differently in the countries of the former Yugoslavia. 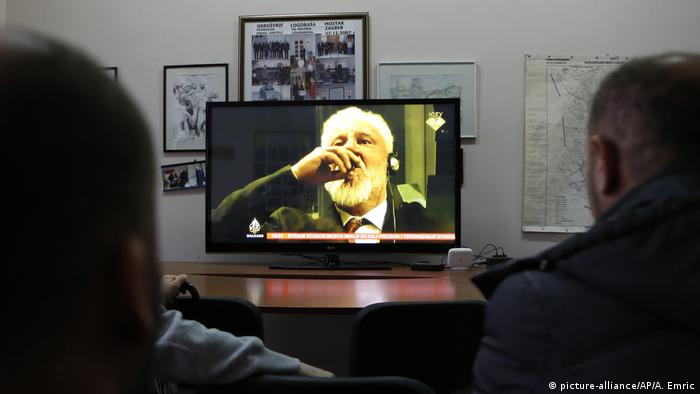 One day on, the Hague Tribunal's guilty verdict against six former Bosnian Croat leaders for crimes committed during the Bosnian War in the early 1990s, and Slobodan Praljak's spectacular suicide before the court on live television, remained the top headline in Croatia. The country's current situation might best be described as a state of emergency.

On Thursday, the Croatian parliament, the Sabor, held a moment of silence for Praljak, a former military general — and a man legally convicted of being a war criminal by The Hague Tribunal. Some representatives in the hall said that the verdict was unjust and ignored historical facts, exclaiming that Praljak had died for his people. Another parliamentarian who said the tribunal's decision had finally shined a light on something that had long been kept silent in Croatia was immediately threatened by an enraged colleague: "Three people called my office yesterday after you said you were happy that Praljak poisoned himself. If they could have found you, you wouldn't be here today." Another representative who refused to take part in a moment of silence for a convicted war criminal was informed via social media that "seven bullets" were waiting for him. 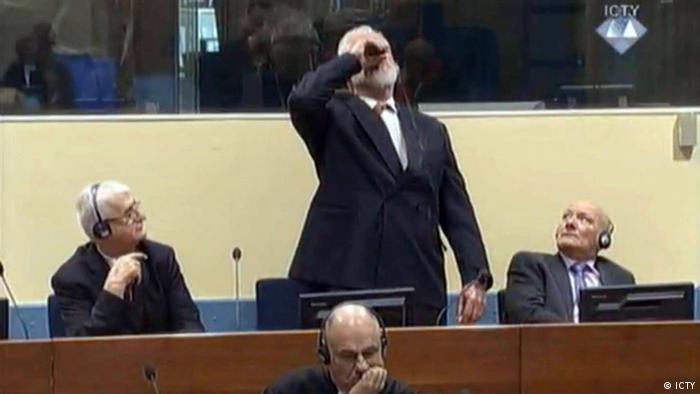 Praljak had just had his 20-year prison sentence reconfirmed when he stood up and drank what appeared to be poison. He died later the same day in the hospital.

Croatia as the aggressor

On the whole, however, people in Croatia were less interested in whether Praljak should be seen as a hero or a criminal, and much more preoccupied with another aspect of the tribunal's verdict: the fact that the court found former Croatian leader Franjo Tudjman partially responsible for the war in Bosnia-Herzegovina. Judges were of the opinion that the six accused, together with then leading politicians in Croatia, were key figures in a "joint criminal enterprise [that] was aimed at creating a Croatian entity in Bosnia and Herzegovina that would facilitate the reunification of the Croatian people, through ethnic cleansing of the Muslim population."

Thus, Croatia it would seem, may now be branded an aggressor in the Bosnian War and the founding father of independent Croatia a war criminal. The only thing that saved him from having to answer for his crimes was his own death. For Croatians, the most painful and shocking detail of the opinion is the fact that the tribunal had been unable to prove any such joint criminal enterprise in its previous cases against high-ranking Serbian political and military leaders.

Therefore, reactions in Croatia almost unanimously portrayed Praljak's suicide as a "heroic act" that spoke "about the deep moral injustice towards six Croats from Bosnia and the Croatian people," as the Croatian chairman of the tripartite presidency of Bosnia-Herzegovina, Andrej Plenkovic, put it. On the other hand, people have also repeatedly attested to the fact that they were "unsatisfied and deeply regret the decision," he said.

"The decision was unfounded and unjust, collided with the facts, and, as such, is unacceptable for Croatia," Plenkovic added. "We will use every legal means to appeal it." 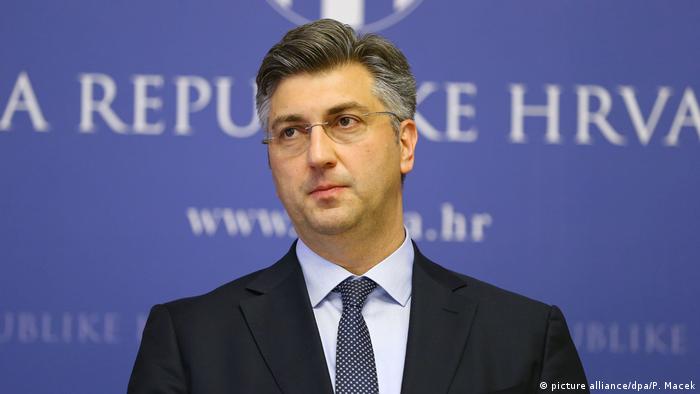 Plenkovic said that the ICTY's verdict was 'unacceptable' for his country

The two faces of Croatia

Croatian President Kolinda Grabar-Kitarovic, who broke off a trip abroad in order to return home as quickly as possible, expressed herself similarly. At a press conference in Zagreb, she said: "Croatia is not an aggressor, instead it did the most for Bosnia-Herzegovina's survival and integrity," adding: "Croatia did not attack anyone."

Bosniaks in Bosnia-Herzegovina have also focused most closely upon the larger findings of the tribunal's decision. Muslim Bosniaks have said from the very start that they were the victims of aggression carried out by its two powerful neighbors: Serbia and Croatia. Bakir Izetbegovic, the Bosniak chairman of the presidency of Bosnia-Herzegovina, noted that the verdict made visible "the dark side of the truth about the war in Bosnia-Herzegovina, as well as the aims of a portion of Croatian leadership during the war." Croatian politics at the time, said Izetbegovic, had two faces. One brought great suffering to Muslims and made Bosnian Croats losers. But another, he said, was brighter, "caring for and helping many of the Bosniaks who had been forced to flee." Izetbegovic stressed that now was the time to leave the past behind and look to the future by "working together with the bright side of Croatian politics." 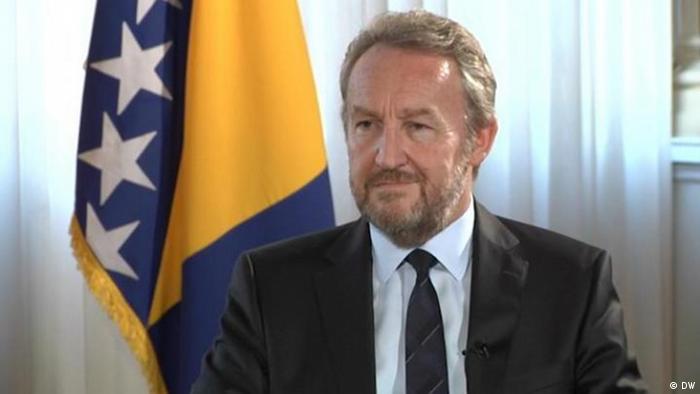 Izetbegovic believes that Croatian politics had 'two faces' in the past, and he supports undertaking positive partnerships with Croatia today

Social media users in Bosnia-Herzegovina were less poetic in expressing their opinions. Many spoke of the "bitter truth," and the "just verdict of The Hague Tribunal." One woman writing about the Praljak suicide on her Facebook page said that it appeared easier to live with crimes than with the truth sometimes. In general, however, most people seemed to want to look forward: "It was not a conviction of the Croatian people, it was a conviction of a few individuals. It could be the first step toward restoring trust between people and between ethnic groups in Bosnia-Herzegovina," said former Bosnian judge Vehid Sehic.

Finally not the ones being pilloried

And as has become the routine during the 25 years of The Hague Tribunal's existence: While those in Croatia painted judges as unjust, incompetent or puppets, in Serbia — where a good word has seldom been found on the Tribunal — supposed objectivity was the rule of the day. Media outlets there preferred, for the most part, to quote the court's opinion without accompanying editorials. There were, however, a few incidents in which a touch of malicious gloating shimmered through. The Serbian tabloid Vecernje Novosti, for instance, ran its story on the verdict with the headline: "Tudjman a criminal! Croatia the aggressor!"

Examiners have found traces of a "lethal chemical product" in the bottle Slobodan Praljak drank from. The war criminal died after a tribunal rejected his appeal of the 20-year sentence given to him for atrocities. (30.11.2017)