Thousands travel to Austria's Bleiburg every year for a memorial which local activists have dubbed the "largest neo-Nazi congregation in Europe." Catholic officials in Austria and Croatia are now split over the event. 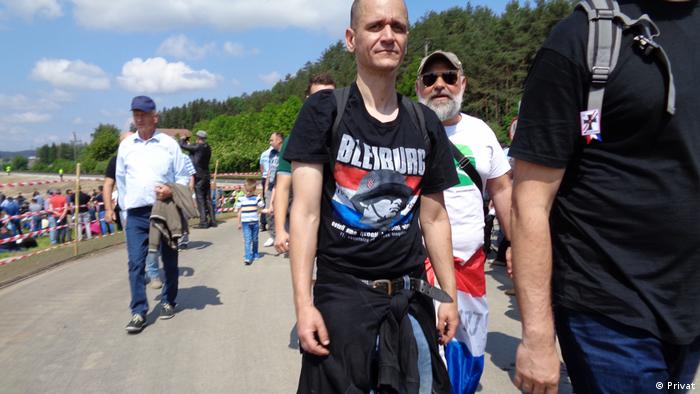 A Croatian bishop was set to hold mass at the upcoming memorial in Austria's Bleiburg, where thousands of people, including far-right extremists and Nazi sympathizers, gather to mark the anniversary of the 1945 mass killings of Croatians.

The local Austrian diocese, however, denied permission for the ecclesial ceremony, saying that the mass was being "politically instrumentalized" at the controversial event. The diocese leaders might still change their decision, a spokesman for the Austrian Bishops' Conference told DW on Tuesday.

Read more: Neo-fascism on the rise on Croatia

The Bleiburg memorial is an emotionally charged topic in both Austria and Croatia. In the closing days of World War II, many thousands of Croatian pro-Nazi Ustasha militants attempted to flee from the Communist Yugoslavian army by leaving the country. On their way towards British forces in Austria, many Ustasha were followed by their families, with members of Serb, Bosnian and Slovenian anti-Communist factions also joining the group.

The Yugoslav army managed to take both fighters and civilians as prisoners, and thousands of them were subsequently killed before they faced trial. Estimates of the size of the group and the death toll vary widely depending on the source.

The Yugoslav forces, many of them ethnic Croatians, kept the details under wraps and portrayed any killings as a justified retribution against Ustasha fighters who had committed numerous atrocities under Croatia's wartime regime.

With the breakup of the socialist Yugoslavia in 1991, Croatian nationalists started putting emphasis on the so-called Bleiburg massacre as a Communist war crime against the Croatian people.

The annual March 18 commemoration in Austria gradually grew in significance, with Croatian lawmakers and government ministers attending the event.

The Croatian Catholic Church has been officially involved in the event since 2003.

In 2017, over 20 political organizations, NGOs, and anti-fascist groups called on the state of Carinthia, where Bleiburg is located, to ban the event.

"The gathering in memory of the Ustasha state has become the largest neo-Nazi congregation in Europe," they wrote in a petition to the state premier.

Austrian lawmakers recently passed a law banning Ustasha symbols in the country. It came into effect this month.

Last week, the head of the Gurk diocese, Engelbert Guggenberger, denied permission for a Croatian bishop to hold mass at the event, saying it would serve to avoid accusations that the church was too close to a "fascist body of thought."

The dismissal made waves in Croatia, where President Kolinda Grabar-Kitarovic said she "deeply regrets" the move by the Austrian diocese. The Croatian Bishops Conference said it "completely rejected" the reasons provided by the Austrian church officials.

"Denying the possibility of praying for the victims of this great tragedy of the Croatian people means disrespecting the victims and losing the feeling for the suffering of innocents," they said on their website.

Separately, Croatian Bishop Petar Palic told the regional N1 broadcaster he had sent a letter to Austrian Cardinal Christoph Schönborn in a bid to revise the decision.

Speaking to Deutsche Welle on Tuesday, Austrian Bishops Conference spokesman Paul Wuthe said Austrian bishops would discuss the ban at their conference next week. At the same time, he stressed that that the issue rested squarely with the diocese chief Guggenberger.

"It could be that he would reconsider his decision, I don't know" he told DW. "The (Austrian) Bishops Conference has no authority, no jurisdiction in this issue."

Both Croatian and Austrian bishops agree that "a mass is a spiritual act which must not be instrumentalized or misused by politics or ideology," he said.