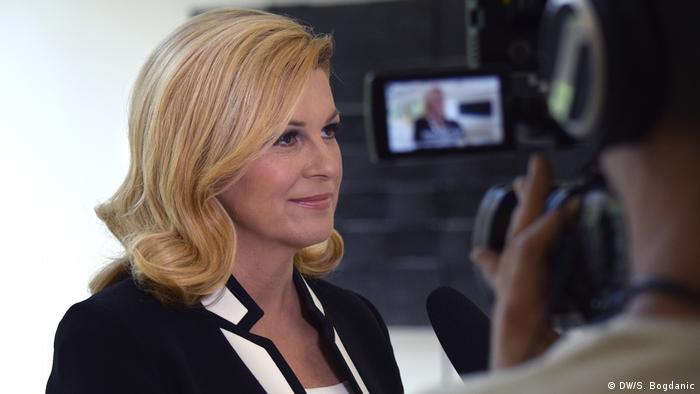 Croatia's national team won the sympathies of football fans worldwide with its outstanding result at the 2018 World Cup in Russia. Parallel to the team's rise to the top, the country's president, Kolinda Grabar-Kitarovic, also drew global attention with her unconventional ways of showing support for the players on the pitch.

In her first major interview after the World Cup, Grabar-Kitarovic told DW's Croatian department that Croatia's football success presented an opportunity to a country still struggling with mass emigration and corruption.

"I truly hope that we will use this moment of optimism and self-confidence in Croatia, this belief that we can truly stand shoulder to shoulder with the world's best, (…) to put wind in the sails of the reform process, which has, unfortunately, somehow lost its content and meaning," she told DW's Srecko Matic in the Croatian capital, Zagreb.

Showing off  'talented people' in Croatia

The jersey-wearing politician raised some eyebrows in Croatia by celebrating in the players' locker room after their win against Russia in the knockout stage. However, world media praised her show of emotion following the final game against France, when she embraced and kissed every single player of both teams after hugging French President Emmanuel Macron. 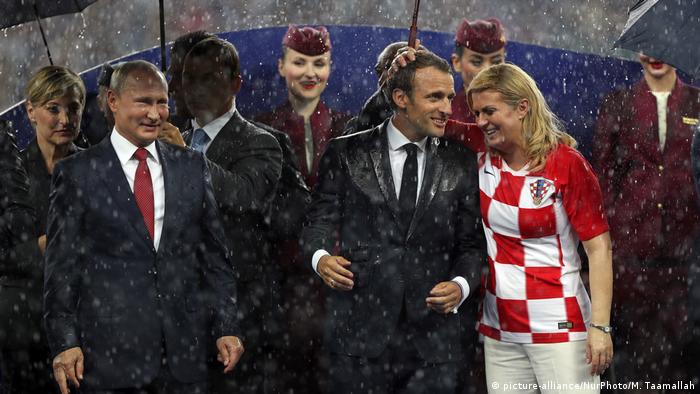 Talking to DW, the president dismissed fears of mixing politics, sports and patriotism.

This sporting achievement allowed "politicians and the whole of the state to gain the benefit of rebranding Croatia as a modern country — a state that is not only geographically wonderful but also has such talented people," she said.

The rebranding of Croatia seemed to hit a hitch, however, with the footballers' homecoming celebration in Zagreb on July 16, for which the players and the national coach Zlatko Dalic requested the presence of a hard-line nationalist musician, Marko Perkovic Thompson.

The 51-year-old rocker is a veteran of Croatia's 1990s independence war, and his nickname, Thompson, allegedly comes from the American-made submachine gun he used while fighting Serbs. Critics describe Perkovic as a fascist and a Nazi sympathizer, linked with Croatia's World War II Ustasha regime. Perkovic denies these accusations, but his shows have been repeatedly banned or canceled in Germany, Austria, Switzerland, the Netherlands and even within Croatia.

Thompson had not been scheduled to appear at the celebration in Zagreb. However, the national team invited him to board the bus that slowly carried the team past the cheering fans to the central stage downtown, where the musician briefly performed. 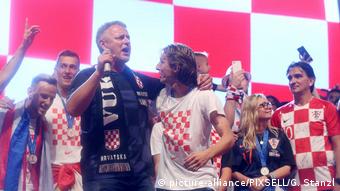 Commenting on the event, President Grabar-Kitarovic said that "the desires of the players should be respected."

"They wanted to have Mr. Thompson for their homecoming party," she told DW's Srecko Matic.

The 50-year-old president also said that some of Thompson's songs were "very dear" to her and that there was nothing offensive about the music he chose to perform at the celebration.

Read more: The dark side of Croatia's World Cup succes

She added that she was "very proud" of the homecoming.

"There hasn't been a single incident, no war cries or Ustasha greetings, nothing even remotely similar to hate speech or intolerance of anyone," the president said.

The Croatian leader also commented on her recent visit to the World War II death camp of Jasenovac. Croatia's Ustasha soldiers, allied with Nazi Germany, killed more than 83,000 people, mostly Serbs, on the site. The issue remains sensitive in modern-day Croatia, as many Croatian independence fighters used Ustasha symbols during the 1990s war.

During the speech, she slammed "the collaborationist Ustasha regime in World War II that brought horrible suffering to the Jewish community, but also to Serbs, Roma and Croats."

However, she condemned any inflating of the number of Jasenovac victims with the aim of "imposing collective guilt on Croatia and the Croatian people."

She also praised the "many Croats who died fighting for freedom and humanity" against the Ustasha.

Talking to DW, Grabar-Kitarovic said that visiting Jasenovac was "deeply emotional" for her.

"We need to admit this crime; it happened" she said.

Kolinda Grabar-Kitarovic became the president of Croatia in 2015, two years after the country joined the EU. She is the first woman to hold the office. Grabar-Kitarovic previously worked as Croatia's ambassador to the US and assistant to NATO secretary-general.