A treasure trove of jewelry from the Bourbon-Parma royal family — including pieces once owned Marie Antoinette — blew past pre-auction estimates. The French queen's pearl and diamond pendant sold for $36 million alone. 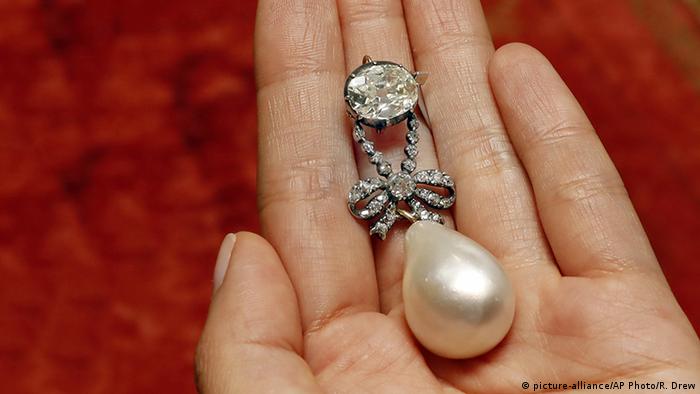 Jewelry that once belonged to French queen Marie Antoinette sold for millions at an auction in Geneva on Wednesday, in an auction billed by Sotheby's as a "once in a lifetime" moment.

Prospective buyers from around the world bid feverishly on the ill-fated queen's 10-piece collection, which hadn't been seen in public for 200 years.

A large diamond-and-pearl pendant once owned by Marie Antoinette sold for over $36 million (€31.8 million) — blowing past its $1 million to $2 million pre-auction estimate.

Bidding for the piece went back and forth for 10 minutes, with Sotheby's saying the sale set a new record price for a pearl at auction.

Her jewelry also included a set of pearl and diamond earrings, a diamond brooch, as well as a monogrammed ring that bears a lock of Marie Antoinette's hair. In the end, the French queen's pieces sold for nearly $43 million.

The Marie Antoinette items were part of Sotheby's sale of heirlooms from Italy's Bourbon-Parma royal family. The 100 lots sold for a total $53.2 million — including the queen's pieces.

"The Marie Antoinette provenance is probably second to none. It's a record for a sale of royal jewels," David Bennett, chairman of Sotheby's international jewelry, told reporters.

Marie Antoinette, the wife of King Louis XVI, was reviled by many in France over her lavish spending in the midst of a national financial crisis.

As revolutionary sentiment flared, she secretly smuggled the jewels and other valuables out of France in a wooden chest sent to her sister as the royal couple planned to escape from Paris.

Both she and her husband were arrested in 1792 and were executed by guillotine in 1793. Their only surviving daughter Marie-Theresa later retrieved the jewels in Vienna, after which they were passed down the Duke of Parma line.