Germany's World Cup-winning goalkeeper Manuel Neuer has been named Footballer of the Year in a poll of sports journalists. Bayern Munich's number one finished nine votes ahead of runner-up Marco Reus. 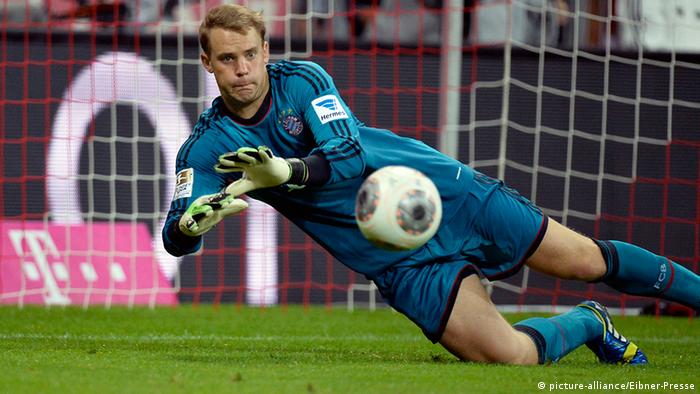 The German football magazine Kicker, which conducted the survey, announced on Sunday that Neuer had received 144 out of 701 votes from members of the Association of German Sports Journalists.

It's the second time Neuer has picked up the award, having first won the accolade in 2011 for his exploits with former club Schalke.

While Germany's attacking talent and organization won many admirers during the tournament in Brazil, Neuer's solid performances between the posts were deemed to have been instrumental in the national side's securing its fourth World Cup. Having been judged the best keeper in a tournament that had no shortage of goalkeeping talent, the player - who also helped Bayern claim another league title in record time - clinched the Golden Glove award.

"This vote is an honour for me," Neuer said on the Kicker website. "I am surprised as well. I didn't expect it although I know that I performed well ... It has an additional meaning for me because I was chosen in this year, 2014, in which we became world champions."

In second place was Borussia Dortmund forward Marco Reus, who missed out on the 2014 World Cup in Brazil after sustaining a knee injury in the national side's final warm-up game.

Thomas Müller, who finished the World Cup as the tournament's second-most prolific striker, was third with 105 votes.

The top nine players in the poll all came from Bayern or Dortmund, with Lazio's Miroslav Klose - the new all-time World Cup top scorer - in 10th spot.

Perhaps unsurprisingly, Germany coach Joachim Löw led the polling for German Football Manager of the Year. He topped the list with 248 votes, ahead of Augsburg's Markus Weinzierl (152) and Bayern's Pep Guardiola (89).

No time to relax: Julian Nagelsmann's hands-on approach on the Bayern Munich touchline 21.08.2022

Bayern Munich enjoyed a Sunday stroll in the park in Bochum – but Julian Nagelsmann was as intense as ever. Whether commanding, cajoling, criticizing or celebrating, the Bayern head coach prefers a hands-on approach.