Malaysia has said it would boycott EU goods, if the bloc goes ahead with its plan to restrict palm oil. Could the ongoing spat with Kuala Lumpur derail the European Union's free trade ambitions in southeast Asia? 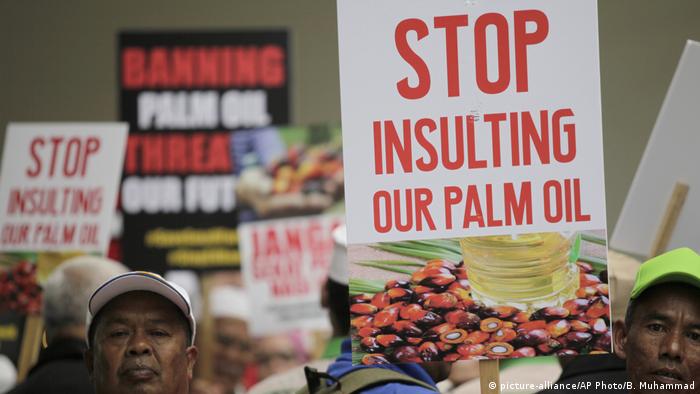 The Malaysian government has threatened to take retaliatory trade measures, including ditching EU-made fighter jets for Chinese ones, if the 28-nation bloc goes ahead with plans to phase out palm oil from transport fuel by 2030.

Palm oil has emerged as a major bone of contention in the EU's relations with Malaysia and Indonesia — which account for 85 percent of the global supply of the vegetable oil.  The European Commission concluded that palm oil cultivation, with some exceptions, caused deforestation and that its use in transport fuels could not be counted toward its renewable energy goals.

"This action [by the EU] risks widening the gap between Malaysia and the EU on a range of issues because palm oil is very crucial to the Malaysian economy," Ali Salman, the CEO of the Malaysia-based Institute for Democracy and Economic Affairs, told DW.

"The EU-Malaysia free trade agreement (FTA) is effectively on hold while this is ongoing and that puts any prospects of an EU-ASEAN FTA firmly out of the picture," he said.

Read more: Can Europe defeat a palm oil 'monster' of its own making?

The EU has been pushing for more open markets in Asia amid rising trade tensions with the US. Last year, Washington raised tariffs on European steel and aluminum and threatens to do the same on cars and auto parts.

The EU's free trade agreement with Japan came into force in February. Free trade deals with Singapore, another Asian economic powerhouse, and Vietnam could kick in as early as this year. The bloc expects the bilateral FTAs to act as building blocks for a future trade deal with ASEAN as a whole.

ASEAN as a bloc is the EU's third-largest trading partner outside of Europe behind the United States and China with more than €227.3 billion ($256.3 billion) of trade in goods in 2017 and about €77 billion in services.

"The EU should see Malaysia as a key strategic and economic ally in the region and its current approach to palm oil undermines that. The situation is of course worse for the EU, if Malaysia acts in unison with Indonesia," Salman said.

The EU's free trade talks with Malaysia have been on hold since 2012 at the request of Kuala Lumpur. The new Malaysian government has yet to take a decision on resuming negotiations. Malaysia is the EU's 21st-largest trading partner in goods with nearly €40 billion of trade in 2017.

"You can say that the threats are part of pressuring tactics and that the EU could retaliate, but it is more likely that there will be intensified negotiations in order to come to a consensus," Axel Goethals, the CEO of the Brussels-based European Institute for Asian Studies, told DW. "The long-term strategy of the EU is anyway to develop good relations with the ASEAN countries and FTA negotiations are a long-term process."

Malaysian Prime Minister Mahathir Mohamad raised stakes in the ongoing spat when over the weekend he said Kuala Lumpur would buy fighter jets from China instead of the European Union.

Mahathir later downplayed the threat, saying it was "only a suggestion" and that no decision had been made yet.

The EU's Eurofighter and Dassault Aviation have been wooing Malaysia for almost a decade for what could be one of Asia's biggest fighter plane deals.

"We are aware of media reports of a potential European ban on palm oil imports — this is a government matter. We remain engaged in discussions about the potential for Typhoon to meet the requirements of the Royal Malaysian Air Force," a Eurofighter spokesperson told DW.

France's Rafale jet, built by Dassault, and the Eurofighter Typhoon, produced by a European group partly owned by Germany and the UK, have been seen as frontrunners in Malaysia's plan to replace its current fleet of Russian MiG 29s that are mostly grounded.

If the Malaysian prime minister were to indeed come good on his "suggestion," it would be a huge blow to the European fighter jet makers, who are already facing stiff competition from their US rivals, Lockheed Martin and Boeing.

Typhoon and Rafale have lost out to F-35 in their own backyard in recent years with Belgium, Denmark, the Netherlands and Norway opting for Lockheed Martin's latest-generation aircraft.

"The Malaysians have made strange selections in the past that have depended very much on affordability and access to technology," Scott Clark, the vice president of Global Defense Program at consulting firm Frost & Sullivan, told DW. "The decision criteria will not only be about aircraft performance," he said, adding that political and economic ties with China — Malaysia's largest trading partner — could be one of the factors.

In a document submitted to the EU, the Malaysian Palm Oil Council (MPOC) — the country's marketing agency for the vegetable oil — said Brussels failed to do an impact assessment of the curbs in the EU and on trade, and used selectively chosen or assumed data, Reuters news agency reported.

Malaysia, which has described the move as a form of "crop apartheid," says restricting the use of palm oil in the EU would endanger the livelihoods of some 650,000 small farmers in the country.

Palm oil is Malaysia's main agricultural export, accounting for some 5 percent of the country's total exports. The EU is the No.2 export market for Malaysian palm oil. The bloc uses 45 percent of its total palm oil imports for biodiesel and another 15 percent to generate heat and power.

The European Commission says it's not proposing a blanket ban on palm oil in biofuels.

"Palm oil is not identified as a bad biofuel per se," Daniel Rosario, a spokesperson at the commission told DW. "While palm oil has been associated with the highest level of deforestation (worldwide), palm oil that is certified as a low ILUC (Indirect Land Use Change) risk can continue to benefit from incentives."

"Exemptions include for example planting on unused lands. Another exception is for small [land] holders, noting the importance of small holders in Indonesia and Malaysia," Rosario said.

ILUC relates to the unintended consequence of releasing more CO2 into the atmosphere by converting more and more forests into agricultural land to produce biofuels.

The commission's plan will be reviewed by the European Parliament and the European Council in the next two months.

European environmental advocates say a new EU plan to eliminate palm oil biofuel by 2030 does not protect rainforests and was heavily influenced by EU trade interests in Malaysia and Indonesia. (22.06.2018)

Indonesia is the scene of massive deforestation – most of it illegal slash and burn. (25.07.2018)

Indonesia: The Eviction of Orangutans

The ban from the world's largest exporter has rocked an already precarious edible oil market. The price of cooking oil has soared as war rages between sunflower oil producers Russia and Ukraine.