′Make things last′: Can the circular economy save the planet? | Environment | All topics from climate change to conservation | DW | 15.02.2017

We are using up resources so fast the planet cannot keep up. A shift towards a circular economy, producing less or even no waste, could be the alternative - and countries like Scotland are moving in that direction. 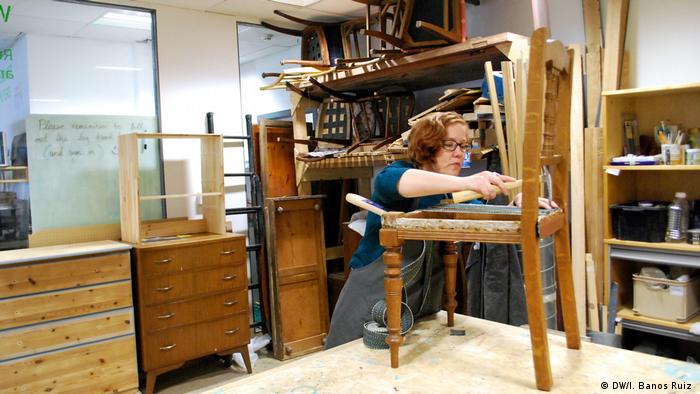 However, there is a growing awareness that this is not sustainable.  Individuals and businesses willing to change things are popping up and making themselves heard, says  Sophie Unwin, founder of the Edinburgh Remakery, a social enterprise promoting a zero waste society through a circular economy in the Scottish capital.

At this year's World Economic Forum in Davos, the Scottish Government received the global Award for Circular Economy Governments, Cities and Regions for its efforts to bring about the transition away from a traditional linear economy.

The alternative model is also being promoted by the European Commission, which is working to reduce waste. 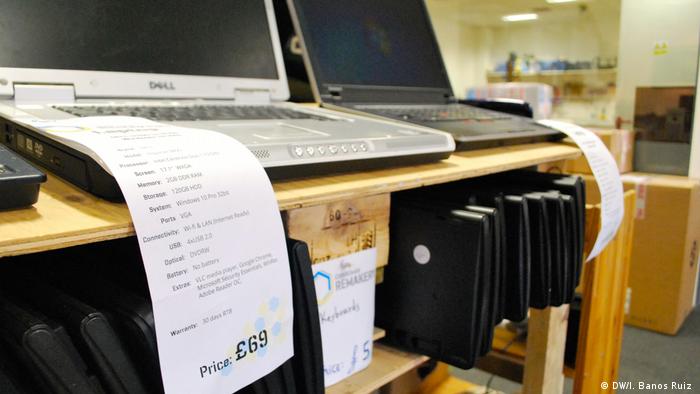 E-waste is one the fastest growing waste streams in the EU. At the Remakery, discarded computers get a second chance

One man's waste, another man's material

Seb Egerton-Read is content coordinator at the Ellen MacArthur Foundation, which works with business, government and academia to accelerate the transition.

"Our current economy is linear," he told DW.

"We take resources out of the ground, we turn it into something useful, and at some point it is discarded and wasted."

This is the process that is depleting our planet's resources on the one side, and filling the landfills on the other, Egerton-Read said.

A circular economy aims to minimize waste by establishing a closed-loop supply chain. Waste material which cannot be avoided by one party, can become another's raw material if recycled and re-used.

At the Remakery, for instance, people can learn how to repair their own things, or buy quality repaired products that would otherwise have ended up in landfills. As another good example, Unwin cites a bakery that passes its leftover bread to brewing companies to produce beer.

But rather than thinking what to do with the waste at the end of the pipeline, the real idea behind the circular economy is to eliminate the idea of waste from the design phase, Egerton-Read explained.

Eliminate waste from the start

The Scottish government's strategy to "make things last" is regarded as a milestone in the movement towards a sustainable approach.

The organisation estimates that implementing a circular economy by 2050 could reduce carbon emissions by more than 10 million tons per year and create more than 5,000 new jobs by 2020.

As a next step, Scotland is looking at how to embed circular economy thinking in key industry sectors like oil manufacturing and the construction industries, Gulland said.

Cécile Levavasseur is co-manager at the Edinburgh Tool Library. She is convinced a shift in attitude is the starting point for a sustainable society. First of all, we need to learn how to share, she says.

Hers is a library without a single book. Instead, users come for tools of all kinds, from a basic screwdriver to almost industrial-standard  wood-saws. Some can be borrowed, others can be used on the premises.

"Here, instead of having one tool and one user for life, we have several users for one tool," Levavasseur said.

There is a number the tool librarians particularly like to mention: 13. Unlucky for some? This is the average total number of minutes a power drill is used in its lifetime by an individual owner. "But we keep it for 30 years!" Levavasseur joked. 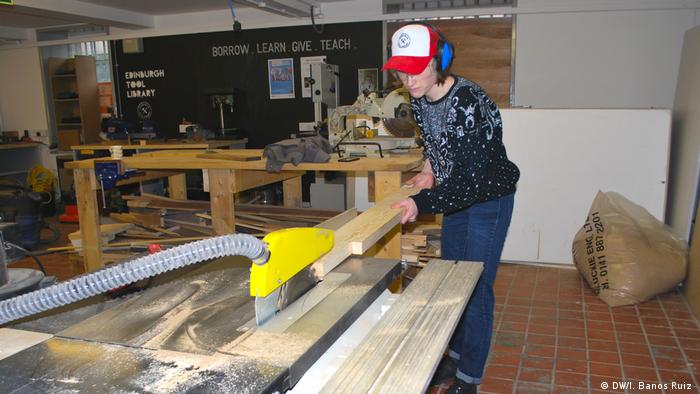 "Borrow. Learn. Give. Teach." - the motto of this unusual library

The Tool Library proponents aim at having a green impact by consuming less and promoting a circular economy philosophy.

Egerton-Read has no doubt this is a realistic model applicable to all kind of sectors . But a mind shift is still required.

"The technical capability already exists and big businesses such as Google, Philips and Nike are starting to act in a circular manner," he said.

In the right direction

But the policy makers also play a significant role in establishing the framework for a transition.

Both the Remakery and the Tool Library got state financial support to start, otherwise it would have been difficult, they admit.

Governments still have to take a more active role in the change. "And they have a lot to learn," Gulland said. But for now, the world appears to be moving in the right direction.

"The hard part now is to make it happen," he concluded.

Gulland, Egerton-Read, Unwin, Levavasseur and all people working to ensure a sustainable future to our planet are certainly going to keep at it, no matter how big the challenge.

"Let’s face reality," Unwin appealed. "And let's make a positive story out of this challenging situation."

Don't waste it, eat it

Why don't we eat crooked cucumbers and knobbly carrots? Because they're hard to find, that's why. Initiatives in Germany and the Czech Republic are encouraging consumers to get more daring with their fruit and veggies. (07.02.2017)

When consumers constantly upgrade to the latest smartphone, this carries a heavy environmental cost. Although recycling helps, the underlying problem is economic growth versus the environment. How can this be solved? (03.05.2016)