Macedonian border becomes trap for migrants | Europe| News and current affairs from around the continent | DW | 01.02.2016

As debate raged in Europe over stopping the flow of migrants and refugees from Greece, Macedonia shut the border, providing a sense of what may be to come. Pavlos Zafiropoulos reports from Idomeni. 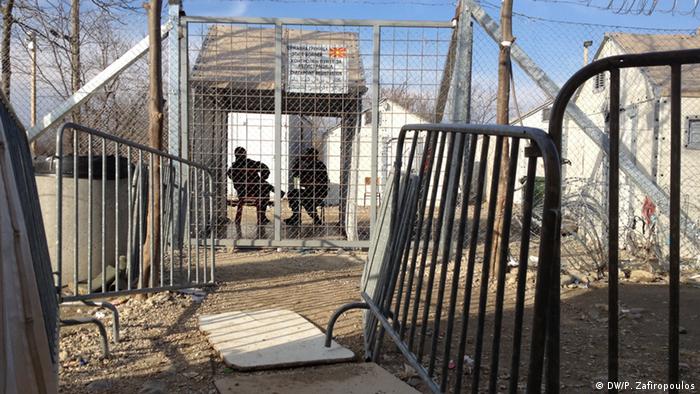 "Excuse me, I would like to ask about the relocation program," said Walid, a 36-year-old Syrian as he approached a blue-vested UNHCR official in the Idomeni transit camp on the Greek-Macedonian border on Sunday.

"But you are Syrian," the official responded, "They will let you through. You don't need the relocation program. You would have to stay in Greece for at least two months and it is not working now."

"But the border is closed," Walid said, "and some people say that maybe it won't open."

"Rumors," the official said. "I have seen this twice before since October. They close it and then they open it again. You will get through. I think it will open. Don't worry."

But it is difficult for Walid and the roughly 1,000 other Syrian, Iraqi and Afghani asylum-seekers who arrived at the camp in the past few days not to feel increasingly anxious as the days turn into nights and they still wait to continue their journeys northwards. The small gate through which hundreds of thousands have passed since the razor-wire fence was erected in the summer was shut again by the Macedonian border guards on Saturday morning and remained so over the weekend with no information as to when it was likely to reopen.

"I'm worried because we hear many things, that Germany will stop taking refugees," Walid told DW. "If that happens I will have no choice but to stay in Greece, but I don't know how I can support my children here." Walid came from Lebanon with his wife and two sons as soon as he amassed enough funds to make the trip, working illegally as a truck driver. Had he stayed in Lebanon, he says, there was a risk that he would end up being forced back to Syria to fight for the Assad regime. "I don't want to shoot anybody," he said. 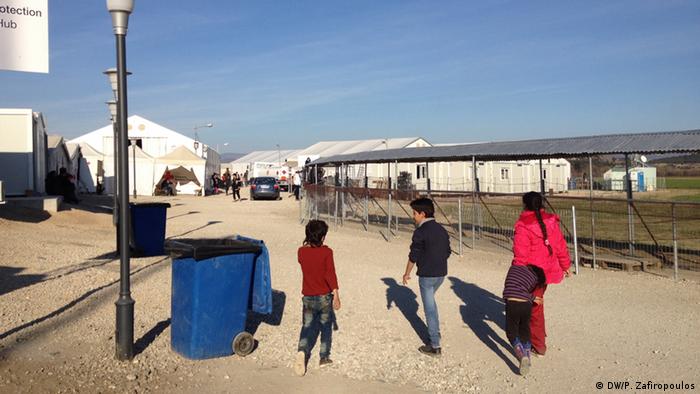 Many of the refugees in the Idomeni camp told DW they were surprised to find the border shut and expected it to reopen. Yet despite that optimism, the longer it is closed the greater the toll on people already weary from many days of travelling and often exposed to the winter elements for days and nights.

"It creates stress and people need additional psychological help, particularly the mothers," said Despina Filippidaki, field coordinator for the Hellenic Red Cross. The number of children arriving in the camp has increased recently from about 20 percent in October and November to almost 40 percent in January. "Imagine the stress on the mothers who have to care for their small children in these conditions, not knowing when they will leave."

The latest border closure in Idomeni follows a similar move last Wednesday and is part of a wider effort by Macedonian authorities to slow the flow of asylum-seekers northwards as a so-called 'Plan B' to seal the Greek border completely gains traction in Europe. In a recent interview with the Wall Street Journal, Macedonia's Foreign Minister Nikola Poposki said, "We aren't three months away, but weeks [away]," from cutting Greece off entirely. With Hungarian assistance, the country is also beefing up security and patrols along the border.

To prevent the camp at Idomeni from being swamped, Greek authorities have in turn slowed the passage of migrants landing on Greek shores to the border by forcing the coaches transporting them to wait at gas stations along the route, turning an eight-hour journey into one that can last several days. Migrants without papers stating they are from Syria, Iraq or Afghanistan are prevented from reaching the Idomeni camp altogether.

Over the weekend the impromptu camps that have been set up at the gas stations by NGOs remained empty. But this was just a brief lull as a strike by Greek ship workers prevented new arrivals on the islands from reaching the mainland. On Sunday the ferries returned to service and as many as 6,000 people were expected to reach the border in the next couple of days, threatening to overwhelm the relief organizations who have taken on the role of caring for the migrants who otherwise would be left sleeping rough in the bitter cold. 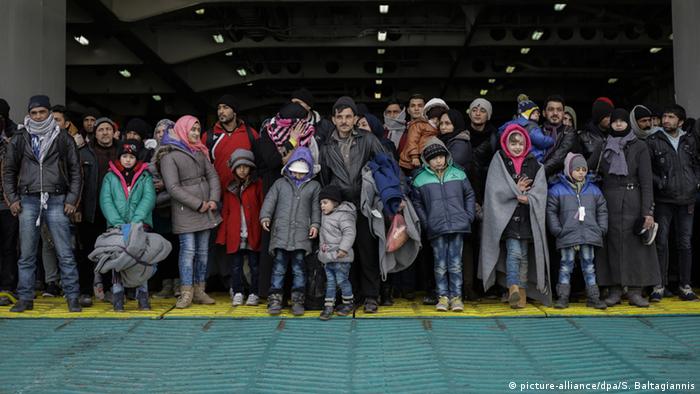 A ferry strike hindered the flow of migrants north

While there are reports that plans are also being drafted at the European level to deal with the humanitarian crisis that would undoubtedly be created in Greece as a result of a complete closure of the borders, they have not been discussed with any of the organizations providing day-to-day humanitarian assistance on the ground. All say they have no other source of information about what to prepare for in the coming days and weeks aside from the news.

Such is the case despite the NGOs and volunteers having proven themselves effective at managing the migrants and their needs. Over the past year even as hundreds of thousands have passed through the area in often very cold and difficult conditions, there have been only two migrant deaths [one man was electrocuted by a high-voltage line during demonstrations in the Idomeni camp in November, and a Pakistani man was stabbed recently in an attack the police believe was linked to people-smuggling gangs]. Yet the camp at Idomeni, which has now been equipped with heated tents, running water, lighting and other facilities, may soon be rendered obsolete in the event of a total border closure.

"The problem is one of planning, because we simply don't know what will happen," Marie-Elizabeth Ingres, the head of the Greek mission for Medecins sans Frontieres told DW. "Because we are humanitarians, we go to where the refugees are. That is why now, for instance we went to the gas stations. We have to adapt. But the problem for us is to understand the plan, to at least understand the constraints."

Of course together with the NGOs and migrants, people-smuggling rings are also waiting on European developments, eager to establish new smuggling routes where legal passage is prohibited. Since November, when Macedonia began turning back migrants who were not from Syria, Iraq and Afghanistan, people smugglers have returned to the area, offering to take migrants of other nationalities into Macedonia through forested routes.

In the Hara café a few kilometers from the border, Algerians, Moroccans, Pakistanis and other migrants congregate and meet with people smugglers before attempting to cross into Macedonia under the cover of night. One group of Moroccans told DW they were planning their sixth attempt after having been returned to Greece by Macedonian police five times. But others, they say, have been more successful.

"After June of 2015, the mafia disappeared," Antonis Rigas, head of the local MSF mission told DW. "Now the more borders close, the more we see mafia activity returning. And if the borders close completely it won't just increase here; new passages are already being opened up elsewhere, on the Albanian border for example. We don't know where they are." 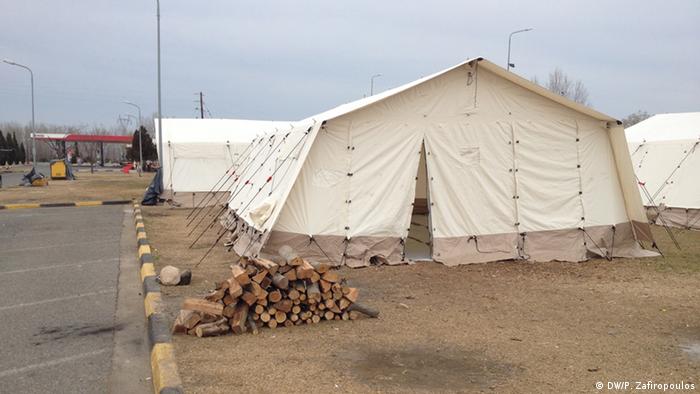 The more criminal rings control and profit from illicit migrant routes in the absence of legal alternatives, the more other forms of criminality such as people trafficking and sexual exploitation are also likely to increase, with the thousands of unaccompanied minors making the trip into Europe particularly vulnerable.

In Idomeni many of the refugees are only loosely aware of the debate raging in Europe about their futures. Having spent their savings and braved the harrowing crossing from Turkey to the Greek islands - a crossing that claimed over 240 lives in January alone - they are committed to seeing their journey through.

Even for the better informed such as Samah, 30, who has studied journalism herself and is travelling with her husband and their two infants after selling their grocery store and leaving behind the mortars and suicide bombs of Damascus, the more pressing concern is how many more nights she will have to care for her children in the camp.

"I have flu and they have flu, it is not healthy here," she said gesturing at one of the large, crowded tents.

She says that the debate is understandable, although what is lacking is discussion about Europe's own role in the Syrian conflict, which she sees as a war being fuelled by major regional and global powers. Does she believe the gate to Macedonia will ultimately open? "I hope so. Hope is all we have left," she says.

That hope was ultimately rewarded on Monday morning as the Macedonian border was reopened and groups of refugees were slowly allowed to begin to cross again. But in their place more will soon arrive, and fears are growing that the final border closure is fast approaching.

The EU's current plan is to protect external borders and, if necessary, expel Greece - not from the eurozone, but from the Schengen area. That will not keep people from moving to Europe, DW's Bernd Riegert writes. (26.01.2016)

A European solution to the refugee crisis remains a long way off after the EU's 28 interior ministers met in Amsterdam on Monday. Instead, the ministers have got into a new argument with Greece. (26.01.2016)