The EU's current plan is to protect external borders and, if necessary, expel Greece - not from the eurozone, but from the Schengen Area. That will not keep people from moving to Europe, DW's Bernd Riegert writes. 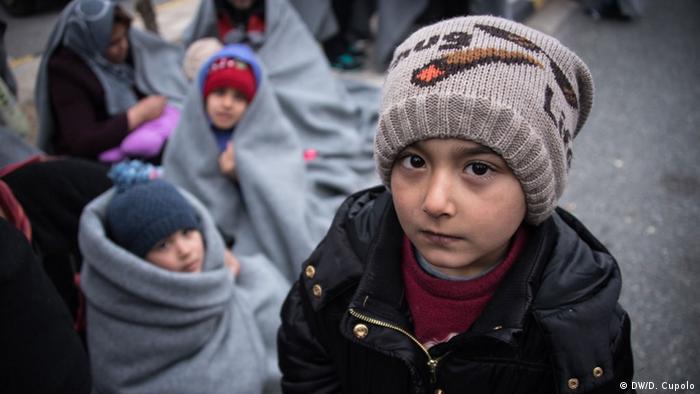 The European Union's external borders must be better protected. We have heard this sentence uttered by European politicians again and again. Interior ministers will repeat it over and over at their informal meeting in Amsterdam. What does it mean, though? That question was rightly posed by Greek representatives. If one seeks to protect Europe's external borders in order to maintain passport-free travel within the Schengen Area, then one has to know against what, or whom, one is protecting.

German officials see the strengthening of controls as a way to reduce the number of people coming to Europe to "sustainably and noticeably" lower levels. In theory, people would not be allowed to enter sovereign EU territory. Does that mean that Greek border agents are to capture refugee boats at sea, send them back to Turkey or, as a last resort, sink them? No, that would be inhumane, because people in distress at sea, however they got there, must be rescued.

Refugees would continue to come to Greece, even with increased border protection, and would have to be housed and registered on the isles. Asylum procedures would have to be completed there within days to keep people from continuing on along the Balkan route. But that would necessitate enormous reception camps. Further, it would require a distribution system to separate people allowed to remain in Europe from people designated to be deported and repatriated. "Hot spots" are supposed to be the basis of such a system. But even today these exist only in theory. Right now, Greece is simply not capable of fulfilling its responsibilities. Shutting down the border with Turkey is thus impossible.

Threatening to throw Greece out of the Schengen Zone, in which free travel is supposed to be the rule of law, would do absolutely nothing. The situation on the ground would not change. What Greece needs much more is help building reception camps to house refugees near the border. That cannot be brought about with political threats. Over the past few years, we have seen that Greece reacts, above all, to financial incentives. If one were to link the treatment of refugees to the enormous financial aid supplied by international donors, it would certainly have a greater effect than the threat of expulsion from Schengen.

Quarrelsome and helpless, EU interior ministers have now identified Greece as the weak link in the refugee crisis and are hammering away with the political cudgel. That is cheap and ineffective. The de facto expulsion of Greece would also give remaining Schengen countries a welcome excuse to maintain their own border controls for years into the future. That would do nothing to help solve the refugee crisis. The only thing that it would facilitate would be the final collapse of the Schengen Area.

Forcing Greece out of Schengen would also have little practical effect. A glance at the map clearly shows that Greece shares no common borders with other Schengen states. Albania, Macedonia and Turkey are not part of the European Union. Only Bulgaria is an EU member, but it is not a full member of Schengen. Refugees traveling from Greece to Macedonia would see no difference. Only those traveling by plane would see a noticeable difference. It would also mean that EU citizens from Schengen countries and Greece traveling to other Schengen states would have to put up with passport controls - annoying perhaps, but not dramatic.

The latest dispute between the EU and Greece, this time not over the euro, reveals the utter helplessness of the bloc's interior ministers - all of whom are playing a confused and pointless blame game.

Incidentally, the concept, if it were one, would also have to be applied to Italy. It, too, is incapable of controlling its waters and continues to allow migrants to travel north.

You can comment on this article below. We look forward to hearing your opinion! The thread for this editorial will close 24 hours after publication.

Bellingcat: Russia continued Novichok program despite claiming to end it 56m ago

Opinion: Abortion ruling is a nightmare for Polish women 4h ago