A European solution to the refugee crisis remains a long way off after the EU's 28 interior ministers met in Amsterdam on Monday. Instead, the ministers have got into a new argument with Greece. 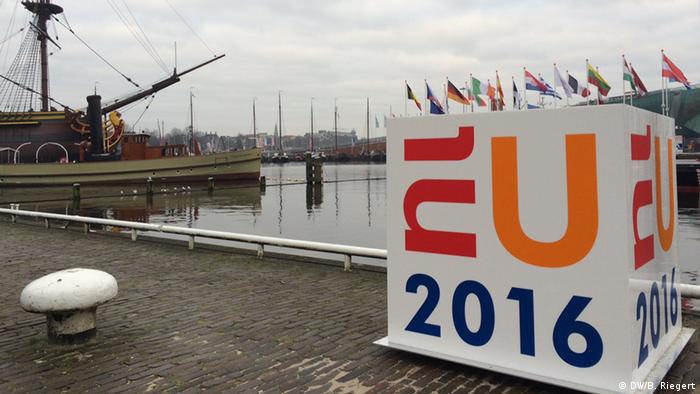 The plan for how to distribute the 160,000 refugees currently stuck in Greece and Italy throughout the rest of the EU is seemingly going nowhere. "Some countries obviously haven't really realized how serious things are," said German Interior Minister Thomas de Maiziere after the first day of talks in Amsterdam. It seems there is a lack of consensus on how to get to a solution that works for everyone.

The EU Commissioner for Migration, Home Affairs and Citizenship, Dimitris Avaramopoulos - himself a Greek - has appealed to the gathered interior ministers to adhere to what they agreed on originally: a fair distribution of the refugees across the bloc. At the moment, Germany is the country in Europe taking in the largest number of refugees. Austria wants to stop taking in refugees in summer, when they reach a cap that they have set themselves.

"The cap is here to stay," said Austria's Interior Minister Johanna Mikl-Leitner in Amsterdam. Germany, like four other countries, plans to control its borders more rigorously in months to come. They will do this even though this puts the Schengen system - which normally allows for uninhibited movement across the EU's borders - under considerable strain. The controls could continue for two years and might even be tightened further in the future, it seems.

Germany's Interior Minister Thomas de Maiziere is excited however, by the fact that the majority of EU states are in favor of a combined border protection and coast guard force. It will patrol the external borders of the European Union - even against a foreign state, if required. This was agreed in principal in Amsterdam, even if many details still need to be cleared up.

Both Poland and Romania are not keen however to give up any of their sovereignty to a combined EU border force. The Dutch, who currently hold the presidency of the Council of the EU plan to put forward a model that all sides can agree on. It should be on the table in June.

But a lot of years could pass before the new coast guard is up and running and has the required number of staff. One thing is for sure: It isn't going to bring any relief in the current refugee crisis.

Many member states, especially Austria, accuse Greece of not securing their sea border to Turkey properly. Most refugees from Syria, Afghanistan and Iraq do conduct part of their journey to Europe by boat, and people are dying during these crossings on a daily basis. Conditions on the Greek islands for refugees have not improved, according to the aid organizations involved.

For this reason Europe's Interior Ministers want to check whether Greece is really maintaining the necessary Schengen standards at its external borders. If that is not the case, Greece could - by law - be excluded from the Schengen region in May of this year. The risk otherwise, is that "the external border could start to move inside the bloc," according to Austria's Mikl-Leitner.

In response, the Greek deputy Minister for Immigration Policy Ioannis Mouzalas said that the EU wasn't helping Greece enough. Rather than just the 15 Frontex boats, 100 boats are needed to secure the Aegean Sea, he said. Generally, Greece is angry that other EU nations are playing the blame game though. After all, Mouzalas maintains, the country is rescuing refugees on a daily basis in accordance with international law.

Nevertheless the awkward questions remain. Why are refugee arrival centers in Greece still not functioning? And why are most of the promised 30,000 spaces for asylum seekers in the country not yet set up? 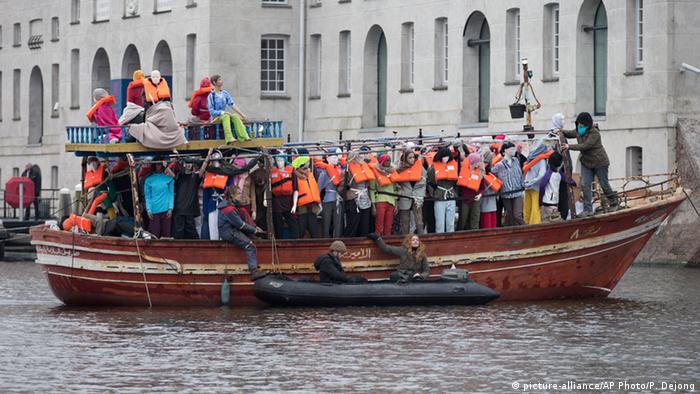 'We are running out of time'

De Maiziere once again used the meeting in Amsterdam to make the point that Europe was running out of time to deal with the bloc's rising number of migrants. The number of refugees arriving needs to reduce in the next few weeks in a "noticeable and sustained fashion," according to the German Interior Minister.

In March of this year, the EU commission will recommend new Dublin regulations to establish which member state is responsible for a refugee's asylum application. It's generally agreed that the current rule is not really working. Until now, the country which first received the migrant, for instance Greece and Italy, is also responsible for processing his or her asylum application. That will have to somehow change in the future.

After the heated - but largely fruitless - discussions on refugee policy on Monday in Amsterdam, one thing is clear according to de Maiziere. "Many ministers are at least thinking about the issue more." For the duration of the Dutch EU presidency, the bloc's interior ministers will continue to meet every four weeks, hopeful of somehow sorting out an answer to Europe's biggest policy challenge in years.

EU interior ministers plan to meet on a regular basis over the next few months to tackle the most urgent problems triggered by the huge influx of refugees. Here are the most important steps the union needs to take. (25.01.2016)

The victory of the radical left-wing Syriza party in Greece exactly one year ago was a political earthquake for Europe. Spiros Moskovou takes a very critical look at the past 12 months with Alexis Tsipras. (25.01.2016)

Eight children were among those who died attempting to cross the Aegean Sea in a bid to reach the EU. Nearly 4,000 migrants - many fleeing war-torn countries - drowned or were reported missing at sea last year. (22.01.2016)