Eight children were among those who died attempting to cross the Aegean Sea in a bid to reach the EU. Nearly 4,000 migrants - many fleeing war-torn countries - drowned or were reported missing at sea last year. 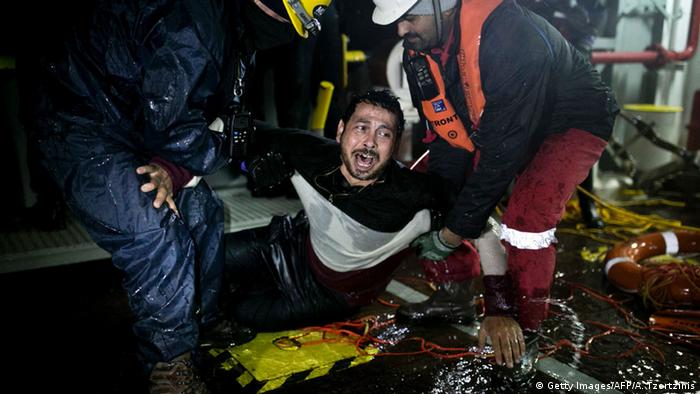 Greek coast guard officials said on Friday that two boats sank off the coast, leaving at least 21 migrants, including eight children, dead as they attempted the perilous journey across the Aegean Sea to reach Greece.

Interior Minister Thomas de Maiziere has said he wants to drastically reduce the number of refugees coming into the country. He also announced that Germany would extend its border controls for an indefinite period. (21.01.2016)

Wednesday Austria's top politicians announced a cap on the number of asylum-seekers entering the Alpine country in 2016. By evening, they were already pulling back on that bold statement. By Thursday, they abandoned it. (21.01.2016)

"Eight bodies have been recovered and 26 have been rescued and taken to the island," an official of the Greek coast guard said, referring to one boat that capsized near the Greek island of Kalolimnos.

"They were on a wooden boat. We do not yet have a clear picture of how many were on board," the official added.

Another wooden boat sank off the coast of Farmakonisi, a Greek island near the Turkish coast, with seven migrants drowning after it hit rocks.

"Six children and one woman drowned while another 41 migrants on the vessel managed to swim to the shore," the official said.

Rescue operations were underway to search for survivors since it was unclear how many passengers were on the boats.

More than 30,000 migrants - many of them fleeing war in the Middle East, Asia and Africa -have made the trip this year in a bid to reach the EU.

Last year, Greece received more than 800,000 migrants, with nearly 4,000 reported missing or drowned, according to figures from the International Organization for Migration (IOM).

In effort to stem the number of migrants seeking asylum, a number of countries have closed their borders. German Interior Minister Thomas de Maiziere said he wants Germany to continue the program of border checks it has put in place, possibly indefinitely.

On Thursday, Austria announced a plan to cap the number of migrants it allows into the country.

European Council President Donald Tusk on Tuesday told the European Parliament that the Schengen passport-free travel zone would likely fail in "no more than two months" if EU member states did not implement an EU-wide strategy that includes relocating refugees from frontline countries such as Greece and Italy.

The 28-nation bloc has struggled to form a comprehensive plan to address the influx of migrants.