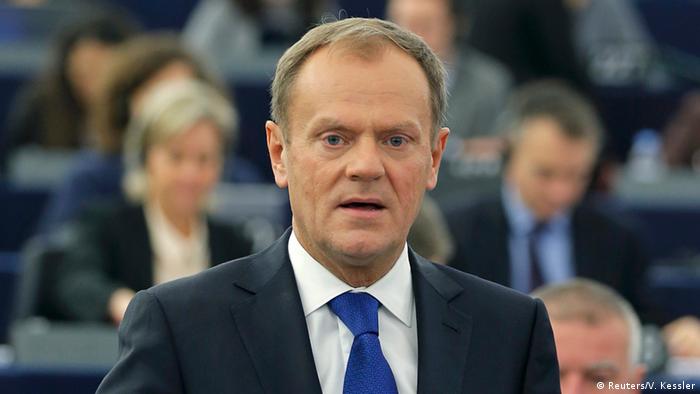 European Council President Donald Tusk told the European Parliament on Tuesday that EU member states had "no more than months" to manage the migration crisis, and failure to do so would result in the collapse of the Schengen passport-free travel zone.

"We have no more than two months to get things under control," said Tusk, adding that the Schengen agreement would otherwise fail.

Tusk, who serves as chairman of European leaders, also noted that the EU would "fail as a political project" if the 28-nation bloc did not properly control its external borders.

The EU is struggling to cope with more than 1 million refugees - the majority of which have applied for asylum in Germany - who entered the 28-nation bloc's borders, many of them fleeing war-torn countries in the Middle East, Asia and Africa.

Germany's foreign minister, Frank-Walter Steinmeier, told foreign journalists on Tuesday that closing the borders of the EU's most populous country will not solve the migration crisis, referring to a letter penned by German officials calling for such measures.

Germany is debating measures to speed up the deportation of rejected asylum seekers from North Africa. Tunisia has agreed to support the government and asked for Germany to downgrade its travel warnings.

The Interior Ministry fears plans of Paris-like attacks by jihadis in Germany, according to the "Bild" newspaper. Documents said an attack could take place "at any time." (14.01.2016)

"I guarantee you that a solution to the crisis will not be achieved through a closure of the border," Steinmeier said.

The foreign minister added that the only way to tackle the ensuing wave of migration is through properly implementing a refugee resettlement program across the EU, along with securing the bloc's external borders.

He also referred to a controversial 3-billion-euro ($3.3 billion) aid package pledged to Turkey that has been stalled by Italy.

On Tuesday, 44 lawmakers of German Chancellor Angela Merkel's Christian Democrats Union and the Bavarian Christian Social Union (CSU) - including German Transport Minister Alexander Dobrindt - sent a letter to Merkel calling on her to return to "the strict implementation of existing laws."

However, Steinmeier - referring to the letter - said that such measures would not be considered before Berlin knew of the outcome of consultations with Austria, which is implementing measures to strengthen its borders.

German politicians are facing increased pressure to manage the crisis after New Year's Eve celebration in Cologne were marred by a string of sexual assaults reportedly perpetrated by North African migrants.

November's Paris attacks that left at least 130 people dead have also stoked fears that a similar assault may be carried out on German soil following the influx of migrants from countries where the "Islamic State" operates.

Trump orders withdrawal of most US troops from Somalia 0m ago

US House votes to decriminalize marijuana, little chance in current Senate 2h ago