The US diplomatic envoy to the EU has described the president-elect's apparent plans as "sheer folly." He called on Germany's chancellor and other European leaders to get across the message that the bloc remains unified. 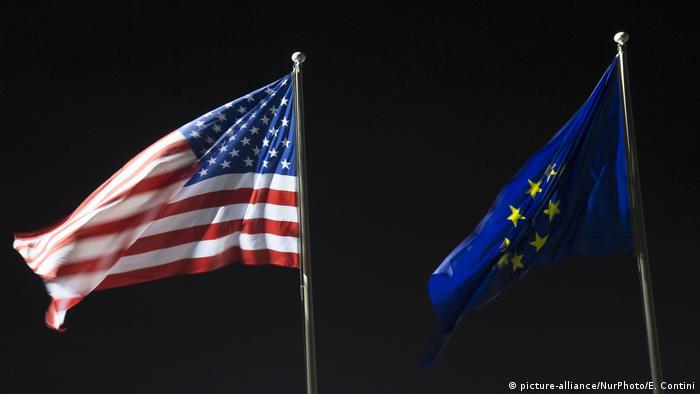 The outgoing US ambassador to the European Union on Friday warned President-elect Donald Trump's administration of supporting the bloc's breakup, saying it would be "sheer folly."

"To think that by supporting the fragmentation of Europe we would be advancing our interests would be sheer folly. It is lunacy," said US Ambassador Anthony Gardner at a final press conference.

"That was the one question that was asked, basically what is the next country to leave, which is kind of suggesting the place is about to fall apart," Gardner said.

"It's a perception that Nigel Farage is presumably disseminating in Washington. And it's a caricature," he added, referring to the European parliamentarian from the UK who led the pro-Leave campaign ahead of Britain's referendum on whether to leave the EU in June 2016.

Farage, who stepped down as head of the UK Independent Party (UKIP) after the referendum, was the first British politician to meet with Trump after his victory in November's US presidential elections.

Garnder called on German Chancellor Angela Merkel, along with other European leaders who have influence, to ensure Trump's administration understands the EU stands together for the bloc's cohesion and integrity.

"I hope that Germany passes the message to the new US team: 'Don't think about splitting the EU, one member state from another,'" he said.

However, German Chancellor Angela Merkel on Thursday said the EU should not be so "naive always to rely on others who would solve the problems in our neighborhood," referring to the United States.

"From the point of view of some of our traditional partners - and I am thinking here as well about transatlantic relations - there is no eternal guarantee for a close cooperation with us Europeans," Merkel said after receiving honorary doctorate degrees from Belgian universities.

She called on EU member states to remain unified ahead of the challenges posed by Brexit and an increasingly fractured political landscape across the bloc.

Since the shock decision by a tight majority of British voters to leave the bloc, the EU has witnessed an empowered euro-skeptic movement in France, Italy and Germany.

10 years of Merkel: The most important moments

Angela Merkel was once seen as the Christian Democrats' interim leader after the departure of Helmut Kohl. Today, she has been party leader for 15 years and ruled Germany for a decade. And the Merkel era continues. (22.11.2015)