Berlin and the German airline giant Lufthansa have agreed on a nine-billion-euro ($9.8 billion) rescue package. The deal is intended to help the airline cope with losses incurred by the effects of the COVID-19 pandemic. 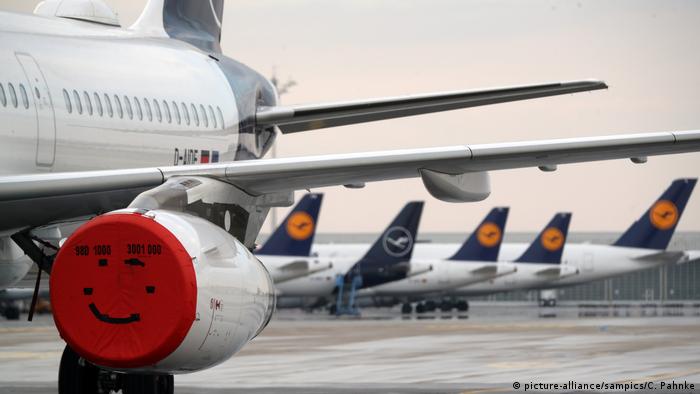 The German government and national carrier Lufthansa on Monday reached a much-anticipated agreement on a state bailout  of the airline in order to help it cope with losses suffered during the coronavirus pandemic.

The deal must now be approved by Lufthansa's advisory board as well as various governing bodies including the European Commission.

Read more: Opinion: When the state gets on board

Last week, the airline group announced that it was in the "advanced stage" of talks with German government officials regarding a bailout worth €9 billion ($9.9 billion) that would give the government a 20% stake in the company.

"Before the coronavirus pandemic, the company was operatively healthy and profitable and had good prospects for the future," the economy ministry said in a statement on Monday that announced the mixture of state investments and loans.

On Thursday, Lufthansa said the conditions of the bailout were likely to include "the waiver of future dividend payments and restrictions on management remuneration."

Europe's second-largest airline has experienced severe financial fallout from travel bans put in place around the globe to slow the spread of the coronavirus outbreak. Around 95% of Lufthansa's fleet is currently grounded.

In April, the company had said it was losing around €1 million an hour.

CEO Carsten Spohr has said the airliner likely has 100 more planes than it currently needs, putting 10,000 jobs at risk.

Over the weekend, Lufthansa confirmed it plans to double its number of active planes to around 160 aircraft as coronavirus restrictions are gradually lifted.

Meanwhile, the majority of some 760 Lufthansa planes will remain on the ground.

The German government may step in to save the utility company amid the threat of reduced gas supplies by Russia, including giving Uniper up to €8 billion in loans.