The German flag carrier says it's close to sealing a €9 billion state rescue deal to help it survive the pandemic. Europe's second-biggest airline grounded 95% of its fleet due to global border and travel curbs. 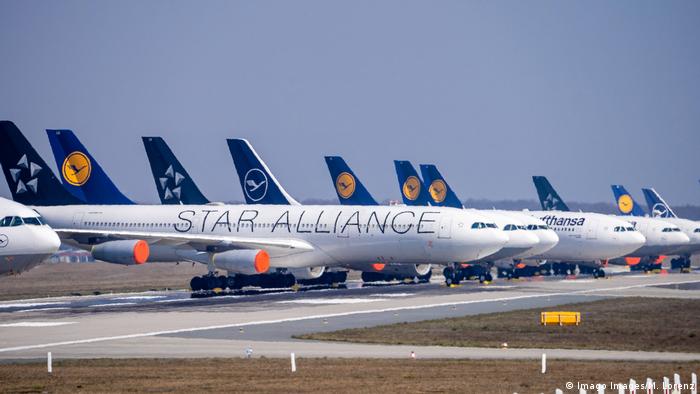 Lufthansa is closing in on a state bailout worth €9 billion ($9.9 billion) that would see the German government take a 20% state in the airline group. In a filing with the Frankfurt Stock Exchange on Wednesday evening, the national flag carrier said talks are at an "advanced stage."

The airline added that if the deal proceeds, the government would receive two seats on the supervisory board, but it would only exercise its full voting rights in exceptional circumstances, such as to protect the firm against a takeover.

The statement noted that some €3 billion of the cash injection would come from the KfW state bank, with the remainder from the government's economic stabilization fund, which was set up to deliver aid to businesses affected by the pandemic.

A so-called convertible bond from the fund is to be added to this share, which can be exchanged for another 5% plus one share.

Reuters cited sources involved in the negotiations said the stabilization fund had not yet put forward a final offer but was expected to do so on Thursday.

Lufthansa's statement said the firm expected conditions of the deal to include the waiver of future dividend payments and limits on management pay, adding the package would have to be approved by the European Commission.

It added that the firm hoped the negotiations would be concluded "promptly."

Europe's second-largest airline faces severe financial difficulties after travel bans forced the grounding of 95% of its fleet — some 700 planes. The company is estimated to be losing in the region of a million euros an hour at present.

Last week, the carrier confirmed plans to restart hundreds of flights from mid-June.

'Give money, but keep your mouth shut'

"It its good that Lufthansa is getting protection without [the government] taking influence on managerial decisions," said a senior lawmaker of Angela Merkel's CDU, Carsten Linnemann, to the business newspaper Handelsblatt. He added that the two seats on the supervisory board should be reserved for experts who would pursue the airline's recovery and not follow a political agenda.

"The goal is for the state to exit as quickly as possible, so that Lufthansa would again stand on its own two feet," Linnemann said.

In turn, Green party representatives described it as a "very bad deal for the taxpayers," accusing the government of socializing the losses of the private company and letting itself be shut out of key decisions. "No private investor would conclude such a bad deal," said the party's budgetary and economic spokespeople, Sven-Christian Kindler and Katherina Dröge.

"Give money, but keep your mouth shut — the government is paying a lot of money to Lufhansa for a minimum influence and for the risk of losing billions," he said.

Lufthansa's management has been in talks with the German government for weeks over a rescue deal to help it cope with what is expected to be a protracted travel slump. But the two sides have struggled to agree on how much control the government should get in return for support.

Besides its own services, Lufthansa owns several other European carriers, including Austrian Airlines, Swiss International, Brussels Airlines and Eurowings.

The Cologne-headquartered firm, which has its main operating base in Frankfurt, generated revenues of €36.4 billion in the 2019 financial year.

DW editors send out a selection of news and features eahc day at 1830UTC. Sign up for it here.

Ahead of announcing their multi-billion-euro recovery plan, the EU economic affairs commissioner said that firms in countries without national support available may receive EU aid. He also praised the Franco-German plan. (21.05.2020)