The bill allows for the detention of asylum seekers and curbs migrants' right to appeal. Lithuania claims neighboring Belarus is using migrants as a "weapon." 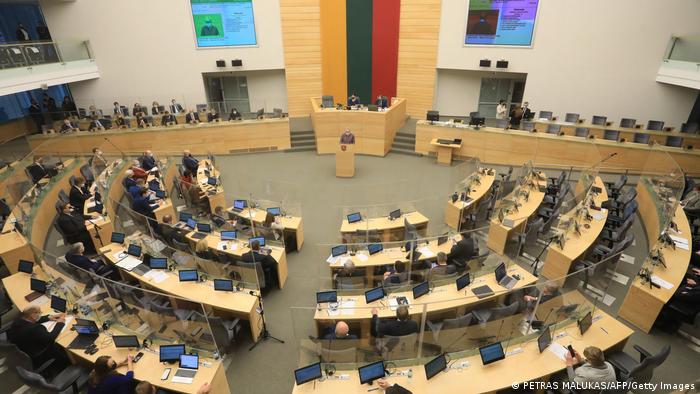 Almost all lawmakers approved the bill

Lithuania's Parliament on Tuesday approved a raft of new laws tightening the rules on migration and asylum.

What is the new legislation on asylum seekers?

The bill prevents any release of migrants from detention for six months after their arrival.

It also curbs the right of appeal for rejected asylum-seekers and stipulates that migrants can be deported while their appeals are under consideration.

A total of 84 lawmakers in parliament supported the bill, with one against and 5 abstentions.

Several non-governmental organizations have said the decision to detain the migrants violates Lithuania's international obligations, as well as the rights of the asylum seekers.

"It enshrines the current bad situation in Lithuania's detention centers in law and leaves vulnerable people in an even more vulnerable situation."

What is the EU-Belarus dispute over migrants?

On Monday, Lithuania accused Belarus of using migrants as a political "weapon" to put pressure on the EU.

The country's foreign minister, Gabrielius Landsbergis, told DW that Belarus was using refugees from war-torn countries as "human shields" in an attempt to force the bloc to ease sanctions.

Lithuania says Belarus is using migrants as a weapon

The EU has imposed a series of sanctions on Minsk over what it says is an "escalation of serious human rights violations and the violent repression of civil society, democratic opposition and journalists, as well as the forced landing of a Ryanair flight" in order to detain a dissident blogger and his girlfriend.

In response, Belarus vowed to allow migrants to cross into Lithuania.

Vilnius accuses Minsk of flying in migrants from abroad to send to the EU. Last week, Lithuania began building a fence along the border and deployed troops to prevent migrants crossing illegally into its territory.