Following weeks of negotiation, international leaders have approved an agreement calling for an end to foreign interference in the war in Libya. Germany's Heiko Maas said the resolution represents a "big step forward." 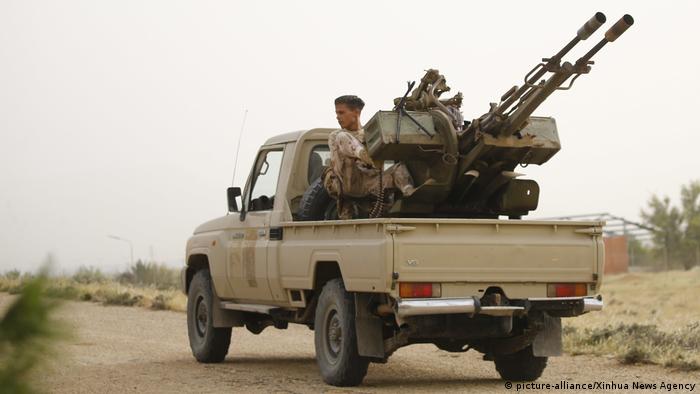 The UN Security Council on Wednesday in New York adopted a resolution calling for "lasting ceasefire" in Libya's ongoing conflict.

The resolution confirms commitments made by international leaders during a summit in Berlin on January 19, including upholding a UN arms embargo and ending international interference in the conflict and military support for the opposing factions.

The text, which was drafted by the United Kingdom, was approved by 14 votes out of 15, including Germany. Russia, a Security Council veto-wielding power abstained. The resolution calls for continuing talks between the factions in Geneva under the auspices of the UN.

German Foreign Minister Heiko Maas said Wednesday in Berlin that the international community needs to take the Security Council's decision seriously and respect the arms embargo in its entirety.

"We have taken a big step forward towards solving the Libya conflict," said Maas. "The results of the Berlin Libya conference are now binding for all sides."

The resolution aims to end fighting between a UN-recognized government led by Prime Minister Fayez al-Serraj based in the capital, Tripoli, and forces in eastern Libya loyal to rebel military commander Khalifa Haftar and his self-styled Libya National Army (LNA).

The LNA launched an offensive in April 2019 to take the Tripoli but has been held off from the city center. A fragile ceasefire has been in place since January, however, scattered clashes regularly occur near the capital.

The UN resolution was debated for weeks, showing the deep international divisions regarding the conflict. Libya has been mired in a bloody power struggle since the NATO-backed toppling of strongman dictator Moammar Gadhafi in 2011.

On Sunday, on the sidelines of the Munich Security Conference, Maas is expected to host around a dozen foreign ministers who participated in the Berlin summit.

"Now is the time to pool all efforts towards a political solution for Libya," said Maas.

The UN-recognized Government of National Accord (GNA) in Tripoli is also backed by Turkey, which recently sent thousands of soldiers to aid in the defense of the capital.

The LNA, which controls much of the south and east of the country, is backed by Egypt the United Arab Emirates and Russia.

Russia has been accused by the United States and the GNA of sending thousands of mercenaries into Libya to support Haftar and the LNA.

On February 5, Russia blocked a draft text of the Security Council resolution over the inclusion of the word "mercenary" in the text, suggesting instead "foreign terrorist fighters." The changes were not accepted in the final text.

"We have serious doubts that in the form that it was drafted this resolution will contribute to any kind of solution," Moscow's UN Ambassador Vassily Nebenzia said Wednesday.

The EU's top diplomat has hailed the Berlin talks on Libya as a major success for German foreign policy. Next up is the tough task of enacting a permanent cease-fire, to be monitored by the bloc. Barbara Wesel reports. (21.01.2020)