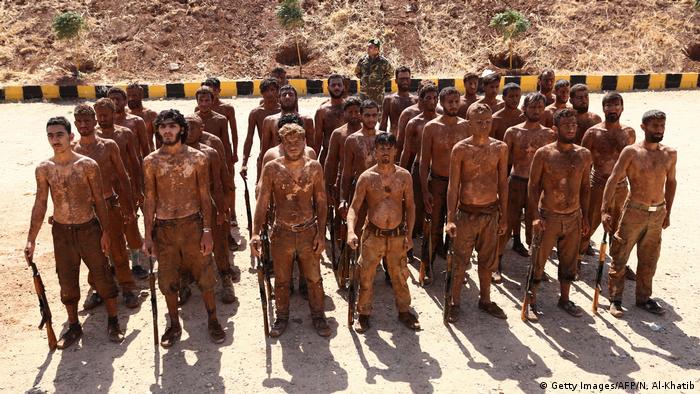 At least 2,000 Syrian militiamen have been recruited by Ankara to fight in Libya for a monthly wage of $2,000 (€1,830) and the promise of Turkish citizenship — an attractive offer for those in Syrian opposition-held areas where salaries are a tiny fraction of that number — according to multiple media reports.

"Libyan Airlines and private planes have been spotted landing in Libya, and many people I have contact with on the ground confirm they are carrying Syrian fighters," the journalist Mirco Keilberth, who covers the region, told DW.

The Guardian newspaper reported that at least 650 fighters have been enlisted in northern Syria and transported to Libya through Turkey in the past two months, with a further 1,350 en route or currently training in Turkey. They have been given a six-month contract signed with the UN-backed government of Fayez Sarraj, rather than the Turkish military.

Ankara is also paying for the medical bills of injured soldiers and returning the dead to Syria, up to 14 of whom have already been repatriated, according to the Syrian Observatory for Human Rights (SOHR).

Frederic Wehrey at the Carnegie Endowment for International Peace said there are plans for an additional 6,000 Syrian fighters, quoting a former Syrian officer on the front in the western capital of Tripoli, which has been under siege from Khalifa Haftar's forces since April last year.

The reports come after Turkey agreed in December to come to Sarraj's aid in the face of Haftar's range of allies from Egypt, France, Jordan and the United Arab Emirates, and an influx of 600 Russian and 3,000 Sudanese mercenaries fighting on the warlord's side.

That buildup continues despite a statement issued at a recent conference in Berlin in which international participants — including the governments of Turkey, Russia and the UAE — committed to "refraining from interference in the armed conflict or in the internal affairs of Libya."

Read more: A glimmer of hope for old-school diplomacy

Keilberth said was reacting to Russia's strategy and would seek to intervene, as it has in Syria, for economic gain and leverage for future opportunities in Libya's reconstruction and to put pressure on the European Union.

Turkey also "has economic interests in a number of African countries such as Mali and Kenya and is trying to influence these areas through religion," Keilberth said.

Many of the fighters are reportedly from parts of the Turkish-backed SNA: the Mu'tasim Division, Sultan Murad and Suleyman-Sultan Shah brigades — Turkmen Syrians with historic ethnic ties to Turkey. The Sultan Murad Brigade, along with other SNA formations, has been accused of human rights abuses, most recently during Turkey's incursion into northeastern Syria in 2019.

Rami Abdul Rahman, the director of the SOHR, told DW that the number of fighters could be higher than 4,000, from 10 different rebel factions, with as many as 130 former "Islamic State" or al-Qaida fighters.

But Wolfram Lacher, a Middle East and Africa researcher with the German Institute for International and Security Affairs, wrote on Twitter that, though claims that the mercenaries might be extremists "are not implausible," he cautioned against allowing the contingent to be framed as extremists in Haftar's favor. The strongman has rallied regional supporters such as the governments of Egypt and the UAE, who are wary of political Islamists, by claiming to clear out Libyan and foreign jihadis.

The threat of a new force of foreign mercenaries containing extremist elements, in the vein of those that previously further destabilized Afghanistan and Iraq, has raised the question of a fresh long-term problem for the region.

Laura Kabis-Kechrid, of the Middle East and North Africa program at the German Council on Foreign Relations, told DW that the danger posed by foreign fighters to the Sahel region would depend on how many travel to Libya and how long they stay.

"As the number of Islamist fighters coming from Syria to Libya increases, it will become difficult for them to return, which means that a large percentage of them will remain in Libya for a longer periodor flee to neighboring countries."

The promise of Turkish citizenship, a reward previously given to foreigners fighting for Turkey, also implies a further ability to travel, possibly to Europe.

Migration expert Victoria Rietig told DW that a "Syrian who holds a Turkish passport can obtain a visa for the United States or the Schengen area, which would be difficult or currently impossible using a Syrian passport."