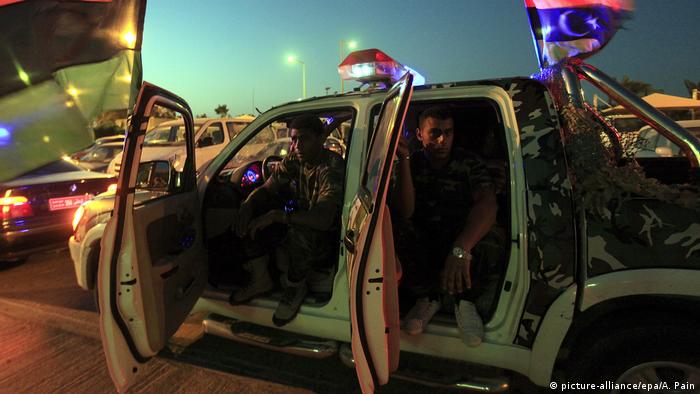 Mahmoud al-Werfalli served as a commander in the Al-Saiqa Brigade, a elite unit in the Libyan National Army.

Werfalli was "shot dead along with his cousin, Ayman, when unidentified gunmen opened fire on his car in a busy street in Benghazi," the unidentified officials were reported as saying.

The two were seriously wounded in the attack. They were taken to the Benghazi Medical Centre where they were reported to have been pronounced dead on arrival.

Who was Mahmoud Mustafa Busayf al-Werfalli?

Werfalli, 43, served as a senior commander in the Al-Saiqa Brigade, an elite unit of soldiers that defected from the Libyan National Army during the 2011 uprising that toppled and killed the late dictator Muammar Gaddafi.

He was a member of forces loyal to eastern military strongman Khalifa Haftar.

In a widely circulated video earlier this month, Werfalli was seen raiding a car showroom in Benghazi alongside his uniformed men, smashing up furniture and computers as they brandished weapons.

No group immediately claimed responsibility for his death, but the assassination underscores the fragility of the war-torn country.

What were his alleged war crimes?

The ICC first issued a war crimes arrest warrant against Werfalli in August 2017 after video footage appeared to show him carrying out and ordering seven separate rounds of summary executions of 33 people in 2016 and 2017.

The video footage referred by the ICC judges showed Werfalli personally shooting hooded and bound prisoners or ordering a firing squad to open fire on them.

The Hague-based court issued another arrest warrant against him for his "alleged responsibility for murder as a war crime."

Werfalli "allegedly shot dead 10 persons in front of the Bi'at al-Radwan Mosque" in Benghazi on January 24 that year, the court said.

The ICC Chief Prosecutor Fatou Bensouda told the UN Security Council in November 2019 that Werfalli was enjoying "his liberty in the Benghazi" and had been promoted from major to lieutenant colonel in Haftar's army earlier that year.

Since the 2011 uprising, Libya has descended into chaos, mired in multiple rounds of conflict mainly between the Tripoli-based government and an eastern administration backed by Haftar's Libyan National Army.

The fighting came to a halt last year, and both sides agreed on a formal ceasefire in October. This was followed by a new Government of National Unity.

The GNU was sworn into office this month, taking over from the two rival administrations that have run the country for years. The GNU is faced with the task of merging Libya's divided state institutions, steering the country to new elections in December, and tackling a dire security situation.

Libyan refugee camps are hell on earth for many. That’s why people often accept deadly risks and attempt to cross the approximately 500 kilometers of Mediterranean Sea between Libya and Sicily - on overcrowded boats!

Despite international efforts to find out the truth behind gross human rights abuses, the pursuit of stability has taken priority in the war-torn country. For many Libyans, transitional justice remains an elusive matter.

German, French, Egyptian and Jordanian leaders hailed Libya's vote to establish a unified leadership as a chance to stabilize the country. The move could pave the way to a resolution to the nearly decade-long conflict.