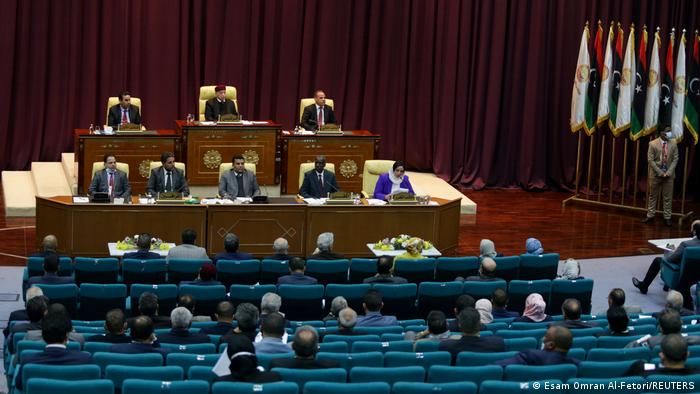 It is part of a UN-backed plan to lead the conflict-ravaged country through elections by the end of the year.

"This a historic day for the House Representatives," declared Speaker Aguila Saleh. "The mandate of the government will last until December 24 when the presidential and legislative elections are held."

After two days of deliberations, lawmakers voted 132-2 in favor of Dbeibeh's newly formed government, with 36 members absent. The vote took place in a rare session in the coastal city of Sirte, where the front lines stabilized last summer.

"Through this vote, it became clear that the Libyans are one unit," Dbeibeh told parliament afterwards. He urged Libyans to "open your hearts to one another and forget the grudges."

The new government replaces two rival administrations — one based in the East and another in the West — that have been ruling Libya since 2014.

The interim administration will replace the UN-backed Government of National Accord (GNA), which has been in charge of Tripoli and western areas, as well as the competing eastern administration linked with warlord Khalifa Haftar.

Fayez Serraj, head of the GNA, congratulated the unity government, expressing readiness to hand over power to the new administration.

"What has happened today is an important step to end infighting and division, and we call on all to cooperate and unite for the sake of Libya and its renaissance," Serraj said in a statement.

US Ambassador to Libya Richard Norland said: "Congratulations on the formation of an interim unity government to set the stage for elections in December."

The United Nations Support Mission in Libya tweeted: "Libya has now a genuine opportunity to move forward towards unity, stability, prosperity, reconciliation and to restore fully its sovereignty."

What is the situation in Libya?

Libya has been in a state of turmoil since 2011, when a NATO-backed military campaign overthrew longtime leader Moammar Gadhafi.

The North African country descended into a civil war between the Tripoli-based GNA and the eastern-based Libyan National Army (LNA), led by Khalifa Haftar.

The conflict in Libyais a model example of how fake news can fuel violence. DW Akademie has been supporting the Libyan fight against disinformation.

Turkey warns Libya's Haftar against attacks on its forces