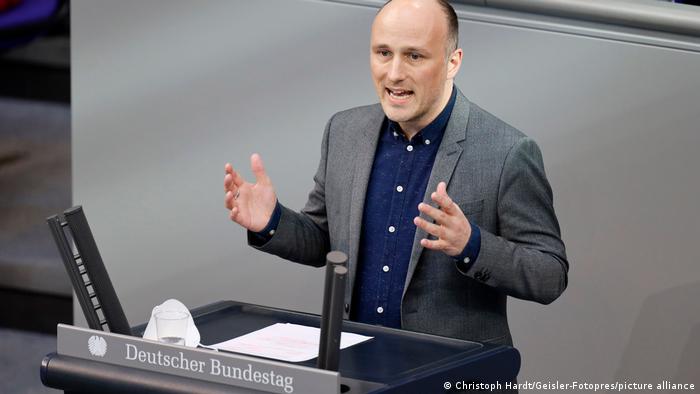 Accepting his new position on Wednesday, Green Party politician Sven Lehmann said "everyone should be able to live freely, safely, and with equal rights."

Germany's month-old government — made up of the center-left Social Democrats (SPD), the Greens and the neoliberal Free Democrats (FDP) — previously set out the plan in their coalition deal. "Germany should become a pioneer in the fight against discrimination," the agreement reads.

In announcing his appointment, Lehman said that protection of all people regardless of their sexual and gender identity "must be ensured in accordance with the Basic Law" (Germany's constitution) and that "the fundamental rights of trans, inter and non-binary people must finally be fully enforced."

The 42-year-old parliamentarian has been a member of the Bundestag for the Greens since 2017. From 2018 to 2021 Lehmann served as spokesperson for queer policy and social policy within the Greens' parliamentary group, alongside Ulle Schauws.

"The issue of justice drives him," Schauws told DW. "That's why fighting for a life free of discrimination, for acceptance and diversity is like an engine that drives him."

Lehmann's close contact with rights groups and activists means he knows exactly what issues are affecting the queer community," she said.

"Even in discussions where there's criticism, he always has an open ear for what's important and what problems there are."

In the 2021 federal election, Lehmann won the direct mandate for his constituency in the western city of Cologne, which is home to one of the country's largest gay communities.

Germany's Lesbian and Gay Association (LSVD) said the newly created office is "another important signal for the queer political awakening promised by the coalition government."

Lehmann has to become "the driving force in the government in order to implement the queer political projects promised in the coalition agreement," Henny Engels from the LSVD board told DW.

"Right now he should urgently endeavor to ensure that LGBTQ+ people are explicitly included in the admission program for refugees from Afghanistan, which was recently presented by Foreign Minister Annalena Baerbock," Engels said.

In December, Baerbock vowed to speed up the evacuation of those in need of protection in Afghanistan. Germany's action plan includes cutting back on bureaucracy to hasten the process.

The German Society for Trans Identity and Intersexuality (dgti) also said it looked forward to working with Lehmann on the path to a "better world for all trans, inter and non-binary people."

In recent years, some changes have been initiated in this area of equality and diversity that can now be brought to a good end, dgti told DW in a written statement.

"From the dgti's point of view, this includes, above all, the abolition of the 'transsexual law' and the passage of new legislation on self-determination."

In 2018, Germany became one of the few countries worldwide that officially recognizes the existence of more than two genders when it introduced a third option, "diverse," in addition to "male" and "female."

In the new government's coalition deal, the three ruling parties pledged sweeping reforms for LGBTQ+ rights including an end to restrictions on blood donations by gay men, as well as legal changes to allow trans people to determine their own gender.

'It's time for politicians to act'

The coalition also wants to see transition-related medical care fully covered by statutory health insurance and plans to create a compensation fund for trans and intersex people who were harmed by previous legislation, which included forced sterilization.

Prior to legal reform in 2011, trans people in Germany were forced to undergo sterilization to receive legal gender recognition.

"Some of these people suffer from these sex-assigning forced surgeries all their lives," the dgti statement read.

"Trans people who were only able to change their civil status after an adjustment operation must also be compensated. For many, this meant that their marriages resulted in a divorce or were annulled. Such action on the part of the state is against human dignity and human rights," the dgti said.

The creation of such a compensation fund would see Germany follow in the footsteps of European neighbors Sweden and the Netherlands.

Compensation has also been an issue with the Bundeswehr, Germany's army: In 2020 the Defense Ministry published a report on the extent of discrimination of gay soldiers before 2000.

Volker Beck, a Greens politician and former member of parliament, has praised the creation of the new post, even if it "comes somewhat late," he told DW.

Beck campaigned vehemently for the recognition of sexual diversity in the German parliament during his time as a Bundestag MP between 1994 and 2017. The first proposals for establishing a position similar to Lehmann's were already drawn up in the 1980s.

Looking to European neighbors, Beck said he hopes the position will be a "signal that gays and lesbians and sexual minorities are seen as citizens with equal rights."

Similarly, Lehmann's colleague Schauws said that while Germany still lags behind many countries on LGBTQ+ rights, she hopes the new government can lead by example for those even further behind. The new coalition has the task of ensuring that "people with queer biographies are finally taken seriously and the realities of diverse families are reflected in our laws so they can live free of discrimination."

"And this goes way beyond queer politics," said Schauws. "This applies to all forms of discrimination, and hatred towards specific groups that we experience in our country — and experience increasingly from right-wing groups. We have to keep a watchful eye on them and say: 'No, not in our country'."

The documentary film depicts the life of Anastasia Biefang as she transitions and takes command of a German military battalion. Biefang says she wanted to show "there are transgender people in the Bundeswehr, too."