Lebanon's army has been given US helicopters and promised more British training for soldiers guarding its border with Syria. Visiting Beirut, Britain's foreign secretary said Lebanon was a "front line" against terrorism. 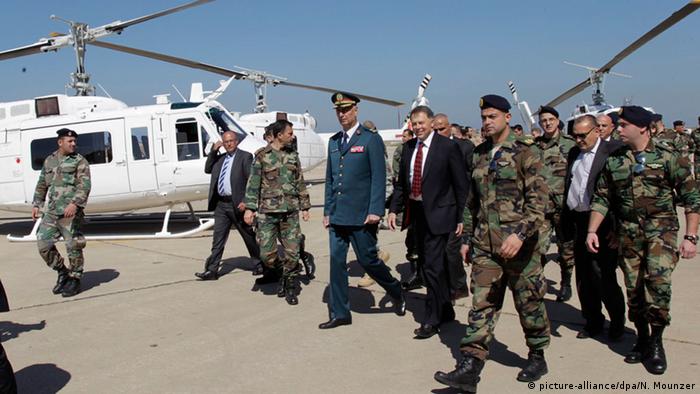 In a simultaneous move, US charge d'affaires Richard Jones attended a Beirut ceremony as the US handed over three Huey II helicopters (pictured above), raising to 10 the number of such aircraft in Lebanon's fleet.

They would improve the Lebanese army's ability to quickly access "remote areas of tension along the border," said Jones.

In recent years, the USA and Britain have contributed millions in military aid to help Lebanon's army carry out border defense against the self-style "Islamic State" (IS) militia and al-Qaeda's Syrian branch.

Their additional pledges on Thursday followed Saudi Arabia's announcement last month that it was halting funding for Lebanese security forces in retaliation for Beirut's siding with Iran, which backs the Lebanon-based militia Hezbollah.

Riyadh reportedly told Lebanon that it could keep the Saudi-funded weapons which were provided by France.

Visiting Lebanese premier Tammam Salam, Hammond said Britain was "delighted" that Lebanon's army had been enabled to "take the fight to Daesh," the Arabic acronym for IS. 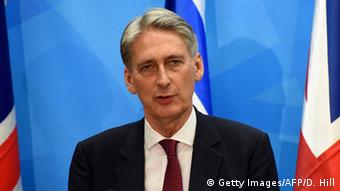 "Our aim is for Lebanon to have secured a 100 percent of its border with Syria," Hammond said, adding that 5000 more Lebanese soldiers would be trained in "specialist techniques of urban counterterrorism."

Britain had begun equipping and training Lebanese border regiments since 2012, he said.

Syria's five-year civil war has prompted more than one million refugees to seek refuge in tiny Lebanon, adding to strains on its infrastructure.

Lebanon's border town of Arsal was briefly overrun by IS and another jihadist faction al-Nusra in 2014.

Lebanon, which has a reputation for fragile government, emerged from its own civil war 26 years ago.