Lebanon, the next failed state?

Wracked by political paralysis and overwhelmed by refugees, can Beirut cope? This week's guest on DW's Conflict Zone is the Lebanese Foreign Minister Gebran Bassil.

Lebanon hasn't had a president since May 2014. Its paralyzed and overwhelmed government hasn't passed a budget since 2005. Simultaneously, the country has taken in nearly two million Syrian refugees. Lebanon only has a population of 4.5 million. Regular car bombs hit the capital Beirut, the terrorist group 'Islamic State' (IS) captured Arsal in the country's north-east in 2014.

A third of the population supports Hezbollah, which much of the international community has branded a terrorist organization. Last summer, the "You Stink" protests marked the peak of a national garbage crisis after the government closed the main landfill. For many, the crisis highlighted Lebanon as a stagnating country on the road to ruin.

The Lebanese Prime Minister Tammam Salam in August 2015 said in a television speech that his country risked becoming a failed state. "I warn we are moving towards collapse if matters continue." A bigger problem than the trash crisis (#YouStink) was Lebanon's "political garbage". 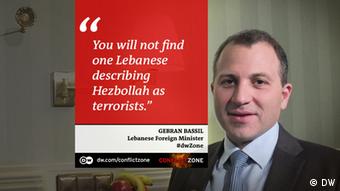 The Lebanese Foreign Minister Gebran Bassil is this week's guest on Conflict Zone with Tim Sebastian.

In an exclusive DW interview, the Lebanese Foreign Minister Gebran Bassil was now being confronted with his country's inability at managing the chaos. Part of that is being closely affiliated with Hezbollah. DW's Tim Sebastian asked Bassil, "You claim to be fighting terrorism, why are [you] allied then with a group that is apparently responsible for perpetrating terrorism?"

In a 2015 report, the US State Department concluded that "Iran and Hezbollah actively pursued destabilizing terrorist, criminal, and militant activities throughout 2014.” Bassil was the only one who refused to sign a document by the Arab League which also branded them a terrorist group. "We cannot accuse [a] third of the Lebanese to be terrorists," Bassil responded.

He also claimed: “You will not find one Lebanese describing Hezbollah as terrorists," however the country's Justice Minister Ashraf Rifi has just resigned over a "Hezbollah domination" in the government in Beirut. 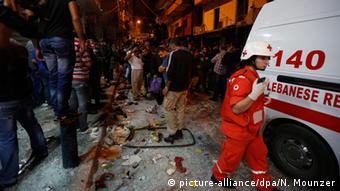 In November 2015, one day before the Paris attacks, 'IS' suicide bombers carried out the worst terror attack in Beirut since the end of the country’s civil war in 1990. 43 people died, 200 were wounded. In August 2014, the terrorists took control of the Lebanese town of Arsal, which is located close to the Syrian border. They have since withdrawn, but both ‘IS’ and al-Nusra militants are still active in its outskirts.

Bassil said: "Of course we are under threat from terrorists! We are on the frontline! And we are paying the price for all terrorism. But do we deserve to be helped or to be accused?"

He also demanded more international support: "Do we agree that we all have to fight 'Daesh' as a terror group?" After the attacks in November, the government for once agreed the sheer amount of political factions could turn against it. Ever since the end of the Lebanon’s civil war, interests of the Sunni, Shia, Christian and Druze communities in the country are being carefully balanced - which explains the current political impasse.

This time round, there seemed to have been a new unity according to Imad Salamey, political scientist at the Lebanese American University. “The general mood, especially on a political level, is to avoid blaming, to avoid statements that would deepen division in favor of expressing the importance of confronting terrorism and Islamist radicalism from 'IS',” he said. “Everyone is aware. The stakes are extremely high," he told Time.

Overwhelmed by the influx of refugees?

And Lebanon must know. Neighboring Syria, it is perhaps closest to the war that has been raging there since 2011. Lebanon has more refugees per capita than any other country in the world. Bassil shrugged off accusations of a failed state: "I wouldn’t call Lebanon a failed state when it was able to cope with 50 percent of its population as refugees. 200 Syrians displaced to Lebanon per km²." But then again, 70 percent of Syrian refugees live below the poverty line - on just $3.84 a day.

"Each day is a monumental struggle to meet the most basic needs," according to the 2015 UN Vulnerability Assessment of Syrian Refugees in Lebanon. The number of those living below the poverty line has increased from just 49 percent in 2014. 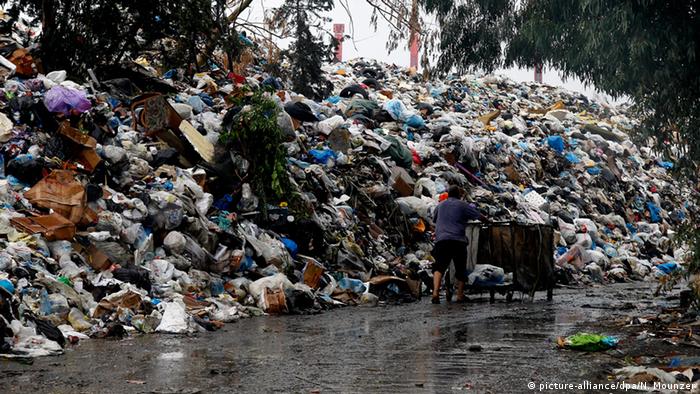 "I warn we are moving towards collapse if matters continue," the Lebanese Prime Minister Tammam Salam said about the national garbage crisis.

Since last year, Lebanon has required Syrian refugees seeking to renew their residencies to provide a written pledge they will not seek to work; a fee of $200; a copy of their UNHCR registration document; a housing pledge, which typically requires a notarized declaration; and valid ID," according to the UNHCR. "With limited international support, the government struggled to meet refugees’ needs," Human Rights Watch (HRW) also said.

The beacon of freedom?

The state of human rights in Lebanon could also be better. Security forces used "excessive force to quell the protests" during the garbage crisis, namely water cannons, tear gas and rubber bullets. Still, Bassil insisted, "Lebanon is the beacon of freedom in the region and this happened once. And we don’t take this incident and extrapolate it on our daily life," referring to a case in June 2015 where inmates were allegedly tortured by Lebanese security forces in a prison north of Beirut. Media reports said that 12 officers were referred for investigation; no update was provided regarding the outcome of the investigations.


"If what you say is true, why did the Committee against Torture note in November in a report to the Human Rights Council, torture is being used routinely, they said, by your armed forces and law enforcement agencies, It spoke of a clear pattern of widespread torture and ill-treatment of suspects in custody, especially Syrians and Palestinians," Tim Sebastian asked. Bassil rejected the allegations and emphasized his country's commitment for refugees.

Is Lebanon's hospitality turning into a disaster? Find out on Conflict Zone on February 24.

Riyadh has suspended two massive aid packages to the Lebanese army and police, after Beirut declined to support anti-Iran resolutions proposed by the Saudis. Lebanon is a base for Shiite Hezbollah militia. (19.02.2016)