Lebanon: Scores injured as riots break out in Beirut

At least 350 people, including protesters and police, were injured as fresh demonstrations turned violent in Beirut. Citizens are protesting political paralysis that has led to a catastrophic economic downturn. 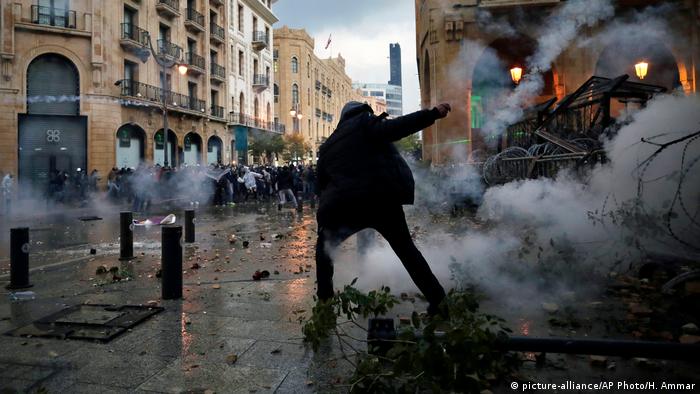 At least 350 people were wounded in Lebanon's capital, Beirut, over the weekend as clashes broke out between security forces and protesters demonstrating outside the parliament building. Many in Lebanon are fed up with what has turned into months without a government, with a disastrous effect on the already stagnating economy.

Protesters set fire to ATMs, tried to break the windows of banks, and threw stones at police, who responded with tear gas and water cannons.

The downtown area near the parliament building was covered in thick white smoke as some demonstrators began to remove street signs, metal barriers and branches of trees and toss them at the security services.

"We will not pay the price," chanted some protesters, referencing the national debt, which now stands at $87 billion (€78 billion) or 150% of GDP. This is one of the largest debt ratios in the world.

More than 120 of those injured were treated in hospitals, including a protester who sustained an eye injury, according to the Red Cross and the Lebanese Civil Defense.

On Sunday, Lebanon's public prosecutor ordered the release of 34 people detained the previous evening, according to the country's National State News Agency. It was unclear how many people would remain in detention if any.

"There is a roadmap to calm the popular storm. Stop wasting time, form a government, open the door to political and economic solutions," tweeted Hariri on Sunday.

"To keep the army, security forces and protesters in a state of confrontation is to circle inside the problem," he said.

As protesters gathered downtown on Saturday, police forced them back to the central Martyrs' Square, which has been the hub for a string of recent demonstrations.

President Michel Aoun called on police to protect peaceful protesters and work on restoring order as the situation continued into the late evening.

Lebanon has been ruled by the same group of political elites since the end of its 15-year civil war in 1990. The recent political and economic uncertainty began when Hariri, the son of a former prime minister, announced his resignation in October. Since then, the country's leaders have been dragging their feet on forming a new government.

In recent weeks, panic has begun to set in as the value of the Lebanese pound plummets and the influx of foreign goods grinds to a halt in a country that relies mostly on imports for basic necessities. Banks have also imposed strict controls on foreign transfers and the withdrawal of US dollars.

Lebanon's capital has been shaken by violent clashes between police and supporters of opposing political camps. The country is trying to form a new government, but talks have been deadlocked since October. (15.12.2019)