Shots were heard and police fired tear gas as protesters in Beirut tried to break through to Lebanon's parliament building. Meanwhile, PM Hassan Diab says he will present a draft bill for early elections in the country. 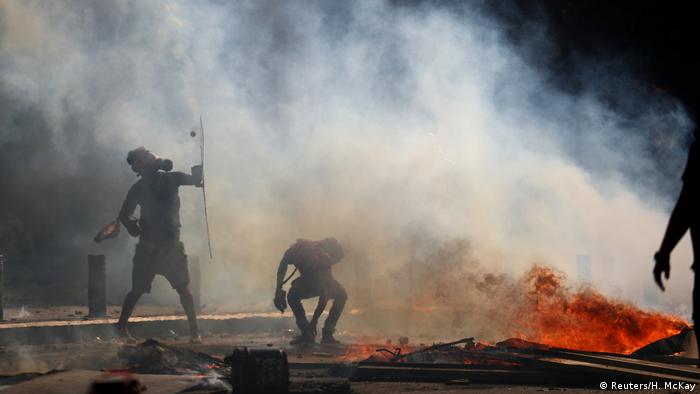 Lebanese protesters on Saturday stormed the country's Foreign Ministry as they vent anger against authorities over Tuesday's deadly explosion in Beirut, which killed at least 158 people and injured thousands.

"We are taking over the Foreign Ministry as a seat of the revolution," Sami Rammah, a retired officer, announced by loudspeaker from the ministry's front steps.

"We call on all the anguished Lebanese people to take to the streets to demand the prosecution of all the corrupt," appealing to the international community to boycott the government.

Protesters burnt a portrait of President Michel Aoun, a representative for many of a political class that has ruled Lebanon for decades and that they say is to blame for its current mess.

Demonstrators also raised a huge placard at the entrance of the ministry reading: "Beirut is the capital of revolution," according to the Lebanese privately owned television MTV.

DW correspondent Bassel Aridi said the protesters had also taken over the Economy and Environment Ministries. He said Lebanese society was divided on many issues, including the cause of the explosion.

"Some believe that it is caused by an external force and some believe it is because of corruption and irresponsibility, and an accident that led to this huge explosion."

But, he added that the protesters were united in one regard. "These clashes make one thing clear. They don't trust any of the promises or speeches from politicians."

According to a police spokesman, a policeman was killed in clashes with demonstrators in central Beirut on Saturday. The officer died after being "attacked" by protesters while "helping people trapped inside the Le Gray Hotel,"  the country's Internal Security Force said in a tweet.

At least 238 people were also injured during the protests, while more than 60 were hospitalized, according to the Lebanese Red Cross. Shots were also heard at the scene.

Calls for international interference have grown after French President Emmanuel Macron visited the Middle Eastern country ahead of a virtual aid conference on Sunday.

In a televised speech on Friday, Diab called on all political parties to set aside their disagreements and work together. The prime minister said he is ready to stay in the post for two months to allow for politicians to work on structural reforms.

Police confirmed that shots and rubber bullets had been fired at the scene of demonstrations in central Beirut against Lebanon's ruling elite. However, it was not immediately clear who was responsible for firing them.

Thousands had taken to the streets in anti-government protests following the blast in the Lebanese capital earlier this week.

Around 10,000 people gathered in Martyrs' Square in the city center, some throwing stones. Riot police subsequently fired tear gas at demonstrators trying to break through a barrier to get to the parliament building.

Demonstrators chanted "the people want the fall of the regime," and held posters saying "Leave, you are all killers."

"We want a future with dignity, we don't want the blood of the victims of the explosion wasted," Rose Sirour, one of the protesters, told Reuters.

"There is hatred and there is blood between us and our authorities," said Najib Farah, a 35-year-old protester in central Beirut. "The people want revenge."

Many Lebanese pin the blame for Tuesday's blast at Beirut port on their leaders.

"My government murdered my people," read one sign. "You were corrupt, now you are criminals," read another.

The three legislators belonging to the Christian opposition Kataeb party announced they had resigned from parliament in protest of the "disaster" that hit the country. With fingers pointed at senior government officials for incompetence and corruption that led to the blast, Kataeb president Sami Gemayel called on every "honorable" member of parliament also to resign.

"A new Lebanon must be born out of the old one," he told parliament.

A senior Kataeb official was among the 154 people killed in the explosion at the port of the city, which left over 5,000 injured and much of the city near the harbor reduced to rubble.

The head of the Arab League joined European Council president Charles Michel in a short visit to the country to discuss donations plans.

Meanwhile, the US embassy in Lebanon tweeted its support for protesters and urged people to refrain from violence. "The Lebanese people have suffered too much and deserve to have leaders who listen to them," the embassy tweeted.

Documents uncovered this week allegedly show that officials had been repeatedly warned about the storage of 2,750 tonnes of ammonium nitrate at the port which led to the blast. The Middle Eastern country was already facing financial disaster amid devaluation of the currency and coronavirus pandemic even before the blast.

Damages are estimated to be upwards of $10 billion (€8.5 billion), with food, medical supplies and housing destroyed.