The race to find survivors in the rubble in the Lebanese capital Beirut comes as more than 60 people remain missing. The Netherlands announced that the wife of the Dutch ambassador to Lebanon has died from her injuries. 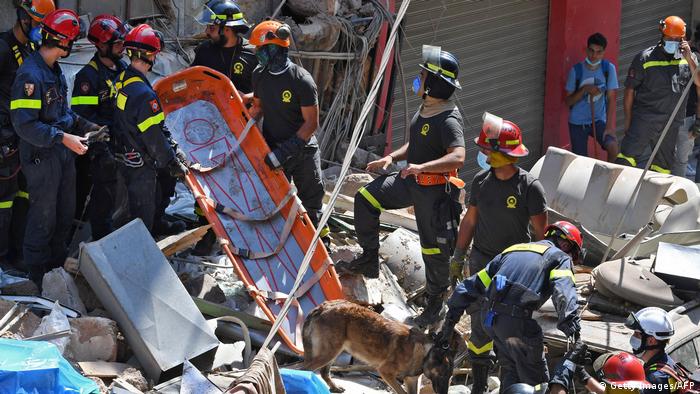 Rescue teams are racing against the clock to find survivors buried beneath rubble in Beirut, as Lebanon's Health Ministry warned that Saturday could be the last day to find victims alive.

The massive explosion, centered at Beirut's port, killed at least 154 people and wounded over 5,000 others — while destroying a large swathe of the capital that has left some 300,000 residents homeless.

The explosion, the biggest in Lebanon's history, came at a time when the country faces its worst economic and financial crisis in decades, hindering Beirut's recovery in the aftermath of the disaster.

The explosion of thousands of tons of ammonium nitrate stored at the port, apparently set off by a fire, has caused an estimated $10-15 billion (€8-13 billion) worth of damage, Beirut's governor said.

The Dutch Foreign Ministry announced Saturday that Hedwig Waltmans-Molier, the wife of the Netherlands' ambassador to Lebanon, has died from injuries sustained in the blast.

"We are deeply saddened by the untimely death of our colleague Hedwig Waltmans-Molier as a result of the huge explosion in Beirut. ... Her death is a loss for the Ministry of Foreign Affairs and for the country," it said in a statement.

Waltmans-Molier, who was at her home when the blast struck, also worked at the Foreign Ministry.

At least 43 Syrian nationals were among those killed in the explosion, Mayadeen TV channel reported, citing the Syrian Embassy in Lebanon.

"We are ready to help with all our means," he said, adding that he would take part in an international conference call to be organized by French President Emmanuel Macron on Sunday to discuss aid for Lebanon.

Turkish authorities have sent a medical team and supplies as well as a search and rescue team.

Thousands of Lebanese gathered Saturdayfor mass anti-government protests amid widespread anger against the country's political leadership, which is blamed for endemic corruption and incompetence that contributed to the blasts.

Some protesters set up a mock gallows for the country's top politicians on Martyr's Square.

"After three days of cleaning, removing rubble and licking our wounds... it is time to let our anger explode and punish them," Fares Halabi, a 28-year-old activist, told French news agency AFP, adding that he plans to join the demonstration scheduled for the afternoon.