Lebanon has requested the arrest of two men believed to be in charge of the ship that brought the explosive material behind the deadly August blast. The captain and the owner have been identified as Russian nationals. 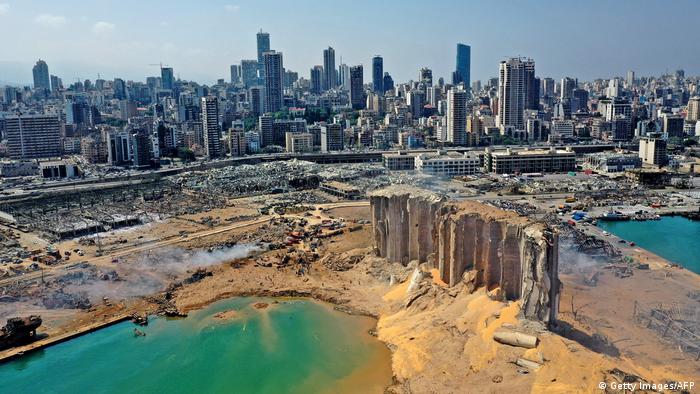 Lebanon on Thursday requested international arrest warrants against the owner and the captain of the ship that brought thousands of tons of explosive material to Beirut that caused the massive port blast in August, the state-run National News Agency said.

The Rhosus, a Moldovan-flagged cargo ship, arrived in Beirut seven years ago carrying nearly 3,000 tons of ammonium nitrate, used for fertilizers, but also for explosives.

The stockpile of ammonium nitrate stored at a warehouse at the city's port exploded on August 4, killing more than 190 people, wounding thousands of others, and causing billions of dollars in damages.

The judge leading the probe into the blast, Fadi Sawan, referred the case to the state prosecution that asked Interpol to detain the owner and the captain of the ship, the NNA said without naming them.

Boris Prokoshev, a Russian national, is widely believed to be the captain of the Rhosus when it arrived from Turkey to Beirut in 2013.

He had identified Igor Grechushkin, a Russian businessman residing in Cyprus, as the owner. He was questioned by the Cypriot police on request of Interpol's Lebanon office in August.

Prokoshev and Grechushkin are the two men for whom Lebanon has asked for arrest warrants.

Asked about the Interpol request, Cyprus police spokesman Christos Andreou on Thursday said they had not yet received one.

The captain, Prokoshev lives in Russia. He said he had not heard anything about it and that he has not been contacted by investigators before.

According to shipping records from 2013, the ship picked up the stockpile of ammonium nitrate in Georgia destined for an explosive company in Mozambique.

The ship made an unscheduled stop at the Beirut port after the owner told the captain to pick up extra cargo, Prokoshev told news agency Reuters. The Rhosus got entangled in a legal dispute and the ship was impounded by port authorities.

In October 2014, the ammonium nitrate was unloaded and stored in a rundown port warehouse where it remained until it exploded.

The ship never the left port and sank near the breakwater in February 2018, according to Lebanese official documents.

There have also been accusations of negligence against the port authorities for keeping the explosive material in poor storage conditions for several years. More than two dozen people have been detained as part of the investigation since the blast, including port and customs officials.

Lebanon has rejected calls for an international investigation into the blast — considered to be the biggest non-nuclear explosion ever recorded — its probe is being aided by foreign experts from France and the US.

The blaze at a tire warehouse has sparked alarm among residents just over a month after a deadly blast hit the same port. The fire destroyed thousands of food parcels and 500,000 liters of cooking oil.

The Israeli leader warned that there could be another disaster similar to the port explosion that killed dozens and injured thousands. Hezbollah denied the charge, showing that the building could harbor no weapons.