In Lebanon, women drive the fight for change

In a country convulsed by crises and outrage, Lebanon's women are often leading civil action fighting for systemic change, as Sina Schweikle reports from Beirut. 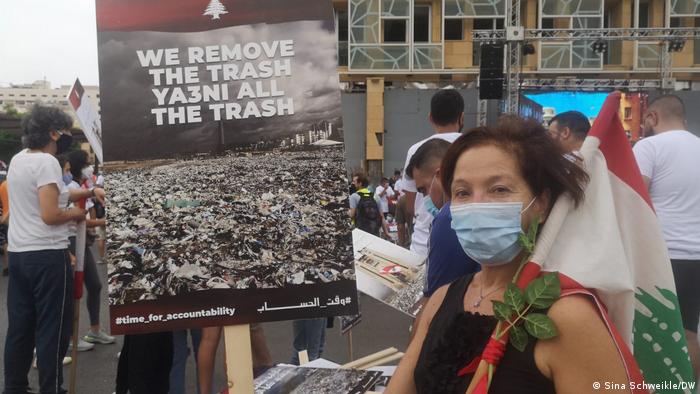 While traffic seethed elsewhere in the city, crowds of angry people moved through central Beirut in protest at a government blamed for the devastating August 4 blast. By the following weekend, security forces submerged the city center in tear gas. At Beirut's Martyrs' Square, people fled from violent clashes with police and retreated amid the turmoil. Cries of "We are oppressed in our own country," came from the crowd. Their voices were female.

Everybody in Lebanon knows the slogan refers to foreign influence and a corrupt, typically male, ruling class. But for women it takes on an added layer of meaning.

'The revolution was, and is, female'

Lebanon was already suffering from an array of distress: an economic crisis, long-standing protests against corruption and a sectarian system of patronage — then came the devastating explosion at Beirut's port last month.

The high number of women involved in the struggle against those challenges is striking. The women among the protest movement show particular courage and strength and are often at the forefront of demonstrations.

Almost half of the protesters at Martyrs' Square following the blast were female. Driving the uprising forward, many of the younger ones arrived in tight jeans and short tops.

"The revolution was, and is, female," said 60-year-old Laila Zahed, grinning. She has been to almost every demonstration since protests began on October 17 last year. On several occasions women stood between soldiers ready to fire and angry demonstrators, so that violence would not break out, she said.

Four weeks after the explosion, 42-year-old activist Melissa Fathallah stood among hundreds of onlookers in the suburb of Gemmayze, neighboring the port, with a similar self-confidence, shouting at a group of soldiers: "You can't even find a crane? Fine, I'll get you the crane!"

On September 3, a Chilean rescue team had detected signs of life in the rubble of a house brought down by the blast a month earlier. The whole city hoped for a miracle. But when a crane was needed to continue the search, the military wanted to suspend the operation and wait until the next day, citing safety concerns. Fathallah saw the delay as too costly and organized a replacement crane. Within a few hours the rescue team resumed work, but in the end, it was in vain. No more survivors were found.

Every day she gets upset with those in charge in the military and politics, almost all of them men: "Lebanon's army and the state are good for nothing," she said. "Since the explosion they have done only one thing: sit around and talk smart!"

Even before the most recent crises, there were signs that women in patriarchal Lebanon were striving for more active participation in running the country. A total of 113 women registered as candidates in the 2018 parliamentary elections, compared to just 12 in the previous election in 2009, according to a 2018 UN report. Six of those running in 2018 were elected.

"Only when more of us are seen and taken seriously, can we make a difference," said Randa Yassir, founder of the youth and women's rights non-profit SMART Center and former journalist. She and her colleague Hana Nasser are working to empower women in Lebanon, she told DW. "Many women often don't even know what's possible until we show them," Yassir said.

After working as a consultant for women's issues for the government, Yassir now wants to educate and train Lebanese women to become as economically independent as possible and overcome supposedly immovable political or social obstacles. 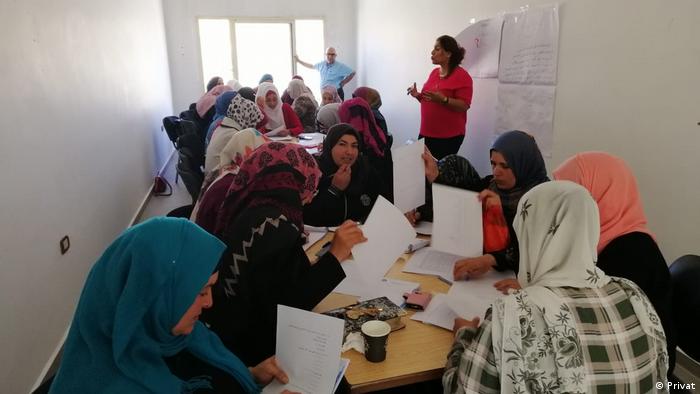 The importance of the work of organizations such as these should not be underestimated: Many young people — women and men alike — see no future for themselves in Lebanon due to mounting crises, and want to leave today rather than tomorrow.

"At the moment, lots of people are talking about 'fight or flight,'" Nasser said. "But we want women in particular to learn to fight and become part of a new system, instead of just swearing at the government and then leaving the country. This is our chance!" 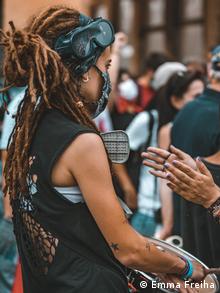 'Men are used to us women being quiet, but now we are speaking out'

Cynthia Maria Aramouni went the other way around. The 31-year-old illustrator and photographer is one of those Lebanese who had long since turned their backs on their homeland. Now, she has returned from the US to take part in the protests against corrupt politicians and sectarian clientelist politics. "We have nothing to lose," she said "It's all about hope."

Like many younger people in Lebanon, Cynthia is fighting for a secular state — the current division of power, a rigid distribution between Shiites, Sunnis, Christian denominations and others, needs to be abolished, she said.

Aramouni is proud that so many women are taking part in this process. "Men are actually used to us women being quiet, but now we are speaking out. We even surprise ourselves sometimes with what we can achieve with that."

Adapted from German by Tom Allinson