After the huge explosion that rocked the Lebanese capital, many young people have begun coming to the aid of their fellow citizens. They are stepping in to pick up the slack where the state has failed for years. "I can't afford to buy medicine for my seriously ill husband," says 84-year-old Wadiha Butros Keries, as she cries and waves her last empty drug packet in the air. Her 80-year-old husband Rizik Shendi sits next to her, teary-eyed, blankly staring into space. He was hit in the head by an object during the massive Beirut explosion. Now, his head has been bandaged. But Rizik Shendi has other medical issues, too. He has Alzheimer's disease, and suffers from Type 1 diabetes.

Cyrine Farhat, standing in the doorway of the couple's home, walks over and hands Wadiha an insulin pen. She's carrying a green cooler and a blood glucose meter. The 28-year-old isn't a doctor, but merely a young woman who has vowed to help her people in this time of need. "We don't have a functioning Lebanese state and government," she says. "So we support each other to survive." 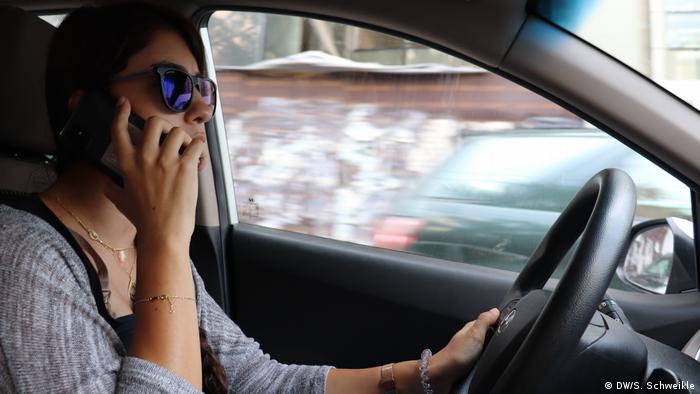 Cyrine takes calls all day from people in need in Beirut.

Cyrine is one of thousands of young Lebanese who have decided to help her fellow citizens in these tough times. In June last year, she found a non-governmental organization called Positive on Glucose, which strives to help people who have diabetes and educate others about the ailment.

Cyrine, who works as a business consultant, grew up in Beirut's southern, Shiite-dominated suburbs. These areas of the Lebanese capital are considered a Hezbollah stronghold. Cyrine, who is a Shiite herself, says she is politically neutral and rejects the "stereotypical" assumption that every Shiite from this region automatically supports the Islamist party. Still, she usually omits mentioning her background when handing out medical supplies, as this has caused problems in the past. Some people, she says, would be scared if they knew she was from a Hezbollah stronghold.

Cyrine and her husband were sitting at home on their sofa when the blast ripped through the city. "First, we thought it was an earthquake, then we thought it could be an Israeli attack," the young woman says. In Lebanon, memories of the 2006 war with Israel are still fresh. Fear of another outbreak of hostilities is widespread. Cyrine says she was lucky to have survived the 2006 war, as all neighboring homes – except hers – were destroyed in the fighting.

After seeing the massive destruction wrought on the Lebanese capital in the blast, Cyrine decided to help. She joined an Instagram group coordinating the distribution of free meals to desperate Lebanese people. Cyrine is convinced that helping each other in trying times is a must, regardless of one's creed or background.

Cyrine is a busy woman these days, her phone ringing constantly. On her way into the city center someone calls her up, offering to donate 500,000 Lebanese pounds — the equivalent of €85 or $100 US on the Lebanese black market currency exchange, in contrast to the official exchange rate of 1,500 Lebanese pounds to $1 US — to buy additional blood glucose meters and insulin. Cyrine can't believe her luck. 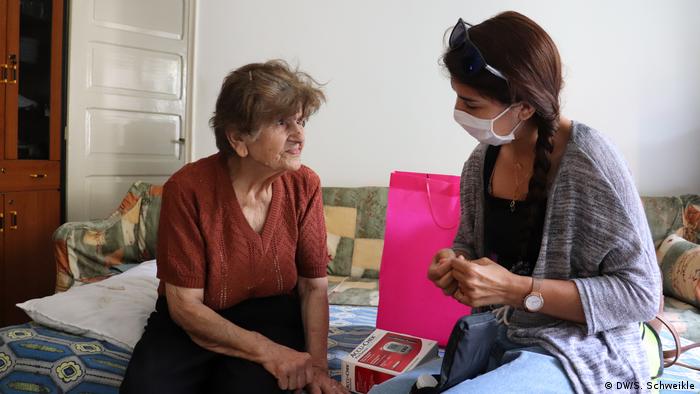 "Lebanese civil society fills in for many aspects of the country's health care service because our political system is failing us," Lebanon's former deputy prime minister and health care minister Ghassan Hasbani tells DW. He says the Beirut blast dealt a severe blow to the people of Lebanon, who are already struggling with low incomes, high unemployment, and widespread poverty. Hasbani, who only left Lebanon's government last year, calls this is a "failed state scenario." This is why, he says, civil society activism is all the more important in Lebanon. Hasbani says many hospitals were seriously damaged in the explosion and have depended on international support to remain or become operational once more.

Cyrine says she is happy to supply desperate her fellow Lebanese with much-needed medication. Meanwhile, a number of political organizations have tried capitalizing on the situation. Cyrine tells DW a few parties asked her if she wanted to become the "Shiite poster girl" for this inter-faith altruism. But she refuses to be instrumentalized.

Like many young people from Lebanon, Cyrine loves her homeland, yet knows full well that fundamental changes are desperately needed. When anti-governmental protests began last October, Cyrine was seven months pregnant with her baby daughter. She was hopeful the protests would pave the way for a better future for her child. Cyrine was hoping the protest wave would help unite Lebanese society despite its religious differences, force the state to work more efficiently and compel the government to take an interest in bettering the lives of its people, instead of lining its own pockets. Gradually, however, the protest movement lost momentum and politics returned to normal. Cyrine once again lost hope.

Until she witnessed many of her young peers helping others after the Beirut explosion. Now, she is optimistic again. "I know we can make it; maybe not today or tomorrow, we'll need time – but we can make it," she says. But Cyrine has become utterly cynical about the country's politicians. In her view, they are just making life difficult for ordinary Lebanese people. She also blames them for her miscarriage. "My daughter died because of medical complications resulting from a corrupt system." While her loss still pains her, it also motivates her to continue helping others. Cyrine's loss motivates her to continue helping others.

Cyrine's Instagram aptly-named Instagram account, CyrineCanDo, manifests her determination. She is full of energy, eager to make things happen. On the phone with her friend, she recounts her visit to Wadiha and Rizik‘s house earlier that day. But she knows the elderly couple need continuous assistance, instead of sporadic visits. So she launches a fundraising appeal to find a nurse who can look after the elderly couple. That evening, after learning that someone has come forward to do the job, she almost cries with joy. "My actions have made a real difference today," Cyrine says, as she gets up to collect more medications to distribute the coming day.